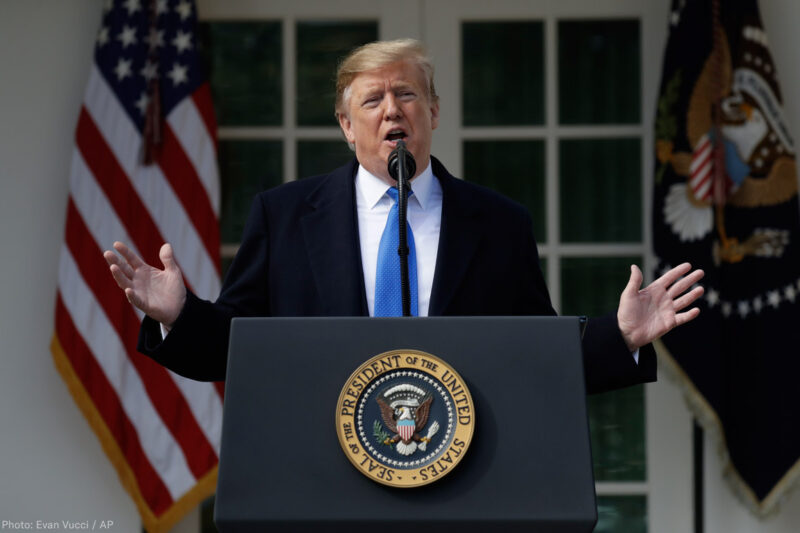 After more than a month of threats, a government shutdown, and bipartisan action by Congress, President Trump has finally declared a national emergency to spend billions of taxpayer dollars on his border wall obsession. In response, the ACLU will file a lawsuit early next week challenging this blatantly illegal executive action.

Let’s get something straight upfront: There is no emergency. Members of Congress from both parties, security experts, and Americans who live at the border have all said so. What the president is doing is yet another illegal and dangerous power grab in service of his anti-immigrant agenda.

Trump’s declaration damages the rule of law and violates the constitutional checks and balances that protect us, the people, from a president’s abuse of power. The Constitution provides that Congress has the power to spend federal funds — our taxpayer dollars. And Congress has enacted a law that gives the president limited power to spend federal funds without a congressional appropriation when he declares a national emergency. That law lets the president spend taxpayer money on military construction when “necessary to support” the emergency use of armed forces.

What Trump is doing is patently illegal, because there is no emergency. He even admitted it himself during his press conference today: “I didn’t need to do this, but I’d rather do it much faster.”

And that’s the truth.

Three weeks ago, Trump announced that if Congress didn’t give him what he wanted, he would declare a national emergency. This week, Congress reached a bipartisan deal to avert another government shutdown and appropriated $1.375 billion for the border wall. President Trump disagrees with Congress’s decision and wants to spend more. That is not an emergency. It’s an unconstitutional usurpation of Congress’s spending power by the president.

The president’s action damages our democracy, and it also hurts our country and the American people in other ways. Security experts have pointed out that the irrational building of a border wall has done nothing to address the supposed “problems” Trump is worried about. Criminal cartels easily circumvent walls by tunneling under them or shipping drugs and contraband through official ports of entry. And the original scapegoats of Trump’s border wall obsession — families seeking asylum — have a legal right under U.S. and international law to apply for refuge, which they do by presenting themselves to U.S. border agents.

Americans who actually live, work, and visit at the border also stand to suffer from Trump’s border wall obsession. The president has indicated that he will target portions of the border in wilderness areas in Texas, where the construction of a wall will destroy national treasures — for no good purpose.

Cooler heads have tried and failed to get the president to back down on his illegal and irrational threat. Trump has finally made his move, and he can be sure we will, too. Come next week, we’ll see him in court.