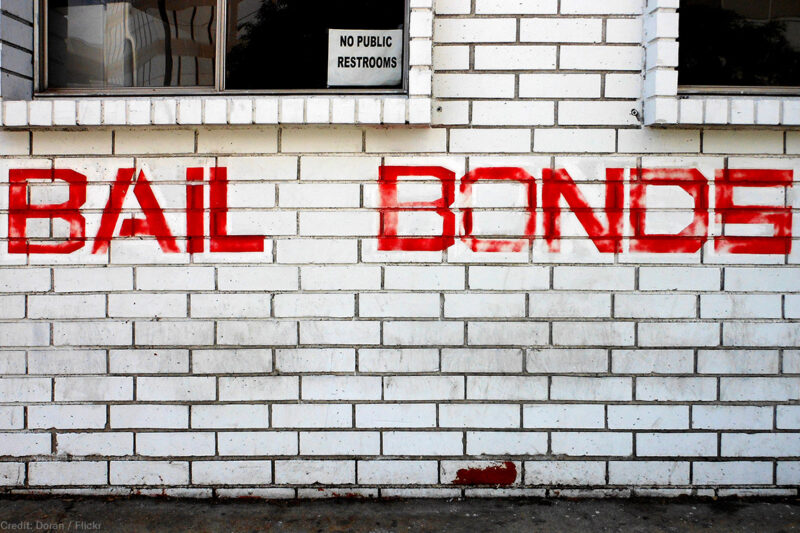 The for-profit bail industry normalizes predatory and exploitative behavior against arrested individuals that needs to be addressed.

Around 9:20 p.m. on Sunday, April 23, 2017, Eugene Mitchell, Shayleen Meuchell, and their four-year-old daughter were in bed at their home in Lolo, Montana, when they heard a violent crash. “It sounded like a truck had driven straight into our house,” Mitchell later said. In a surreal flash, armed bounty hunters kicked in the front door, broke into the bedroom, pointed assault rifles and pistols at the family, and shouted at them not to move.

The bounty hunters terrorized the Montana family. But the trauma and harm did not end there.

The bounty hunters arrested Mitchell, drove him to another county about an hour away in handcuffs, and eventually surrendered him to the jail, all despite not having a valid warrant for his arrest. The entire family remains shaken by the experience, and the damage to their property—which they cannot afford to fix—has caused a dramatic increase in their utility bills.

The bounty hunters were sent to arrest Mitchell not by police; they were hired by a bail bondsman. That past January, Mitchell was in jail related to a driving with suspended license charge, he could not afford his $1,670 bail, and so he used a commercial bail bondsman to secure his own release and return to his family and return to work to support them. When Mitchell accidentally missed a court date that April, his bail bondsman immediately activated a network of bounty hunters to search for and apprehend him.

The bounty hunters staked out the family’s home for two days prior to the attack while Mitchell was out of town doing construction work. During that time they frightened Meuchell—who was home alone with their two small children—and held a friend and her daughter up at gunpoint when they stopped by the house.

All this was over a small bail bond related to minor misdemeanor charges. And this story is far from isolated. In fact, it is common. Predatory and exploitative behavior on the part of bail bonds agents is not only widespread throughout the country, but is directly incentivized because of how the for-profit bail industry operates.

The players in this industry not only deal in trauma and mete it out, they profit from it.

The most recognizable presence of the for-profit bail industry is the estimated 25,000 local bail agents going to local jails, entering contracts with arrested individuals, and bailing them out. Yet, behind these agents are primarily nine large corporations—insurance companies who make money off of the millions of people each year who cannot afford to pay their full bail requirements. Each year, these companies make an estimated $2 billion in profits by keeping just 1% of total bail bonds backed across the country: such profits require millions of people and their families to be subjected to unaffordable bail amounts.

Under the terms set by the insurers with their bail agents, these huge companies face little to no financial risk to themselves. Rather, they require bail bonds businesses to shoulder any costs or losses. This means that even a single forfeiture—where the court keeps the full amount of bail deposited, usually because an individual missed a court date without returning during a set timeframe—could put a bail bonds agent out of business.

These high stakes from insurance companies push bail bondsmen to resort to extreme measures, including using bounty hunters (or, as they often call themselves “fugitive recovery agents”) to protect against financial losses. AIA Holdings, Inc., which was the parent company of the insurance companies backing Mitchell’s bond, expressly acknowledges the pressures to engage in bounty hunting. For example, a blog from AIA glamorized a bounty hunting effort by saying it “illustrates the forces that come into play when a defendant disappears while out on bail and a pile of cash is at stake.”

The commercial bail industry profits off people faced with the impossible choice between sitting in jail or entering coercive contracts with bond agents. Furthermore, the industry fortifies structural racism. People of Color—particularly Women of Color—suffer the worst financial harms. And these companies exact further harms by serving as a roadblock to positive change: employing lobbying groups like the American Bail Coalition to spread fear-mongering misinformation, attempt to stymie reform, and to preserve their fiscal bottom line. Only the United States and the Philippines allow a commercial bail industry to exist.

The exploitation insurance companies perpetuate depends on our abusive money bail system. And our punitive, dysfunctional bail system is the key driver of our mass incarceration crisis. The truth is we don’t need profit motives to ensure a fair and safe pretrial justice system. In fact, actual “fugitive” status is incredibly rare, and the majority of people present no threat of violence if released pretrial.

The ACLU envisions a pretrial justice system that ensures speedy—and free—release to nearly everyone. There is no room for predatory profit motives in the world we’re working towards. That’s why we are fighting, with a vibrant movement of partners, to eliminate the for-profit bail industry and suing to hold companies accountable for what they did to Mr. Mitchell and his family.