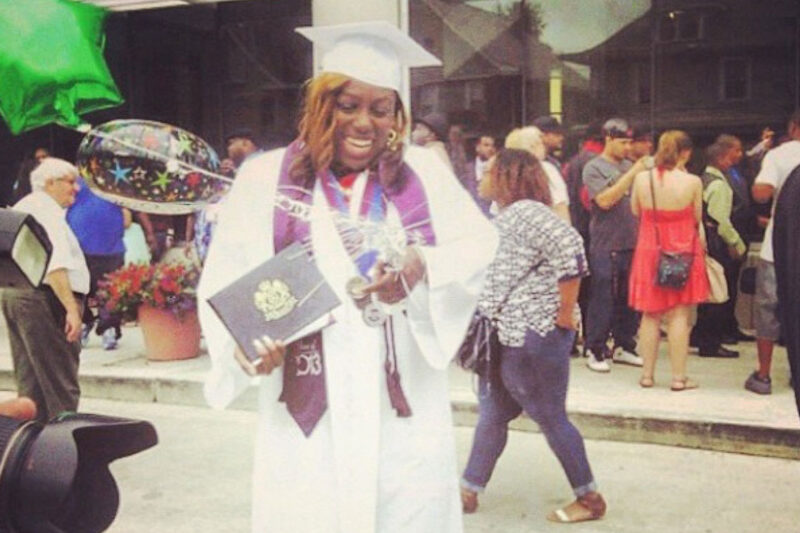 My name is Yunek Moore. I am a Black woman, a college graduate, and a survivor of police brutality. I’m choosing to tell my story because, sadly, this wasn’t the last time something like this happened to a person of color in Peoria, Illinois, and that must change.

On June 4, 2013, I was a happy 17-year-old looking forward to attending college at Millikin University. I had just graduated high school, where I was ranked 11th in my entire class and spoke at graduation as one of my final duties as Senior Class President.

That night, I was at my friend Cipriana’s house, where family and friends had gathered to celebrate our graduation and Cipriana’s departure for Army basic training. We were having a bonfire in the backyard, eating s’mores and drinking Capri Suns.

As I sat in a lawn chair, a bright light suddenly shone in my eyes. I thought someone at the party was using their phone’s flashlight or had turned on the backyard light, so I put my hand up to shield my eyes and politely asked them to stop pointing it at me. The person ignored my request and asked for my ID. Confused and still unable to see anything, I asked the person why she wanted to see my ID card. She never answered or stated who she was.

Instead, I was yanked out of my chair by what turned out to be three police officers, two men and one woman.

The officers grabbed me by the wrists and twisted my arms, then dragged me to the front yard and slammed me up against the brick house. I thought they were going to break my arm and I told them they were hurting me. The male officer responded, “Shut the hell up!”

I was handcuffed, then dragged across the concrete driveway, thrown onto the hood of the squad car, and searched. As my friends came up to ask why this was happening, the officers screamed at them, “Get back!”

The officers shoved me into the back of the squad car, punching and pushing my body. I gasped in pain as I sat awkwardly in the back seat, scared and stunned that this was happening. Not once did anyone tell me why I was being arrested or what I had done wrong.

At this point, my right shoulder was in excruciating pain, my right knee was swollen, and I had swelling and cuts on both my wrists. I was taken to the Peoria County Jail, where I asked for medical attention, but was denied. I was held until 5:30 a.m. the next day, when they finally let my mother pick me up.

Later, I learned I had a torn labrum in my shoulder and an incapacitated wrist, which — combined — required three surgeries, steroid injections, and physical therapy over the next several years. My entire right side was immobilized and one doctor said that my injuries looked like what football players might have after years of being tackled.

Beyond my physical injuries, this experience has taken a huge toll on me mentally. I’m now fearful of the police, and I constantly worry that something like this could happen to me again.

There was nothing illegal happening at the party. Yet I was arrested and cited for “resisting or obstructing a peace officer.” The officers said they entered the backyard out of concern for the safety of those at the party, but the only danger anyone faced that night was at the hands of the Peoria Police Department.

These past six years, my family and I have witnessed how little accountability there is for police officers in Peoria. Without accountability, the unnecessary and excessive use of force I experienced will continue to happen to others.

Our city is no stranger to the kinds of headlines about fatal police interactions that we see across the country. We all know the tragic story of Eddie Russell Jr., who was shot 17 times by the Peoria Police Department despite their knowledge of his history of mental health crises.

It’s time we fight for justice for our fellow community members and demand real reform in the Peoria Police Department.