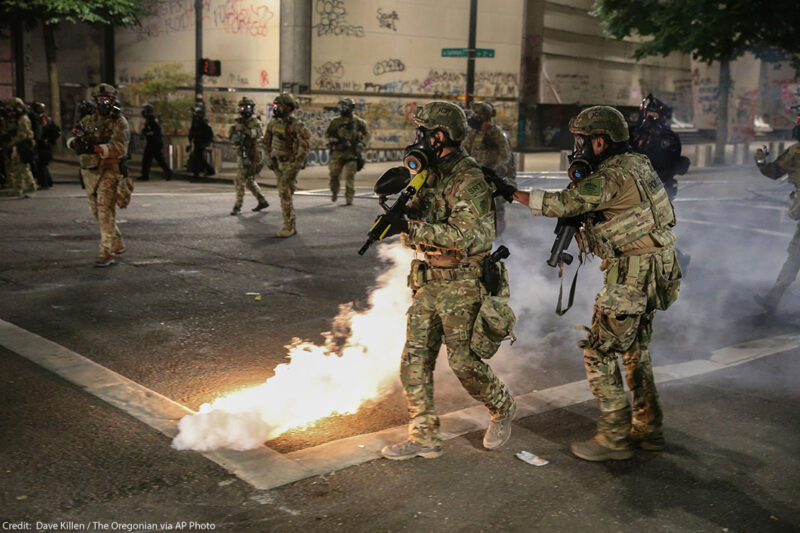 The 1033 program is the vehicle that enables militarized responses against protestors, at the Southern border, and to advance the failed drug war.

Police do not need an 18th Century infantry sword to “protect and serve” communities. Nor do they need Mine Resistant Ambush Protected Vehicles (MRAPs), grenade launchers, or other weapons of war. Despite the dangerous nature of these weapons, local police departments continue to have access to them, free of charge, through the Department of Defense 1033 program. As we face a past due reckoning over our nation’s policing practices, it is time our leaders take the steps necessary to prevent these weapons of war from being used on the nation’s people, protestors, and Black and Brown communities.

Last week, the Senate decided to limit reforms to the 1033 program to just bayonets, tanks, weaponized drones, and some grenades. “Modest” would be a charitable way to describe the amendment to the defense authorization bill offered by Senate Armed Services Chairman Sen. Jim Inhofe. Weaponized vehicles and armed drones were never transferred under 1033, and most grenades can still be secured through the program, so that leaves bayonets as the most significant reform in this package.

The House could have taken up amendments to end or rein in 1033 last week with proposals from Reps. Nydia Velázquez and Hank Johnson. Instead they skipped the opportunity for real reform by passing on those amendments. The Senate voted down a more meaningful 1033 amendment from Sen. Brian Schatz. Despite passing Rep. Johnson’s Stop Militarizing Law Enforcement Act last month with the Justice in Policing Act, it seems Congress caved to pressure from the law enforcement lobby to leave 1033 reforms out of the must-pass defense bill.

With the administration maintaining militarized federal agents in Portland, and following their violent attack on protesters in Lafayette Square, Congress should take every oversight and legislative action available to stop the Trump-Barr “law and order” roadshow. This administration has followed those vile attacks with promises to “surge” federal law enforcement in Kansas City, Chicago, Albuquerque, Philadelphia, Cleveland, Detroit, Milwaukee, Baltimore, and Oakland. We can also expect to see the administration’s response in Portland replicated in Seattle.

If this dispatch of federal agents throughout the country looks anything like Portland, this means more unidentifiable federal agents in camouflage, using tear gas, rubber bullets, and pepper balls in their war against protestors. As federal agents bring their warrior mentality to tackle “violent crime” through Operation Legend and Operation Relentless Pursuit, it is essentially old fashioned over-policing, with its trademark profiling and excessive force.

The federal government has opened up its war chest to federal, state, and local law enforcement since 1990, transferring $7.4 billion dollars of military weapons and equipment to date. While some limited reforms that provided transparency were achieved under the Obama administration and through defense authorization bills in more recent years, 1033 has continued to put military weapons in the hands of law enforcement since the program first came under scrutiny during the protests that followed Michael Brown’s death in 2014, to the present day protests that followed George Floyd’s death.

The 1033 program is the vehicle that enables militarized responses against protestors, at the Southern border, and to advance the failed drug war. The program instigates the “surge” of various federal law enforcement that have been deputized to “lay down the law” in Portland and cities throughout the country. It is beyond time to end the 1033 program and the wave of brutality, racialized policing, and curtailing of civil liberties that it leaves in its wake.