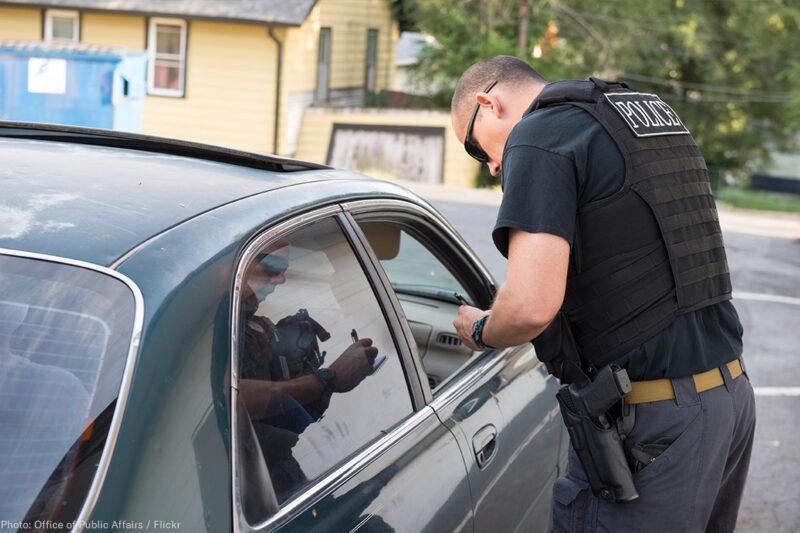 Anybody who has watched at least one episode of Law & Order knows that in America, anyone accused of a crime is considered “innocent until proven guilty.” That’s the way it should be, at least. When a person is accused of a crime, the burden of proof belongs to the accuser.

But what most people don’t realize is that police routinely use a constitutionally dubious form of legal jiu-jitsu called “civil asset forfeiture” to flip this basic principle of fairness on its head. With civil asset forfeiture, police literally accuse your stuff of a crime, and you as the owner have to prove that your stuff is innocent.

Here’s an example: In 2010 Stephen Skinner and his son Jonathan, both African-American, were on a road trip to Las Vegas, Nevada, for a vacation when they were pulled over by New Mexico State Police for going 5 mph over the speed limit. The trooper searched their rental car and found several thousand dollars in cash and coins in their luggage that the two men had set aside for gaming at the casinos. The trooper called Skinner, then in his late 50s, “boy” and released him with a warning that “it’s not over.”

And sure enough, it wasn’t.

As they passed through Albuquerque, police and federal agents pulled them over on a pretext once again, went straight to their luggage, and confiscated their cash with no justification other than the racist assumption that two black men traveling with a big wad of cash must have come by it illegally. Neither Stephen or Jonathan were ever actually accused of a crime, much less convicted. Yet now the cops had their vacation money, and this money grab was perfectly legal.

Most people who have property seized in this manner give it up as lost. The cost of hiring an attorney to argue before a judge that your property is “innocent” or, in other words, was not criminally acquired or used in the commission of a crime, often exceeds the value of the property. This is big business for police departments across the United States, who rely on these seized assets to pad their budgets. The Institute for Justice, a libertarian public interest law firm, estimates that in 2014 alone the Department of Justice took in $4.5 billion in forfeited assets. The assets taken in annually by local and state police departments are doubtless even higher.

Fortunately, Stephen and Jonathan reached out to the ACLU of New Mexico, and with our help, they fought in court to force the government to return their property. The lawsuit made headlines throughout New Mexico, causing a groundswell of outrage at the fundamental unfairness of the practice.

In 2015, the ACLU of New Mexico, in collaboration with the Institute for Justice, the Drug Policy Alliance, and the Rio Grande Foundation, helped pass a bill that abolished civil asset forfeiture, requiring police to obtain a criminal conviction in court before they can take a person’s property. The bill also requires that any forfeited assets must go into a state general fund to reduce the profit motive inherent in this law enforcement practice. The bill passed unanimously, and New Mexico now has the strongest protections against civil asset forfeiture in the nation.

But several New Mexico police departments were too addicted to the easy money. The Albuquerque Police Department, among others, refused to fully comply with the new state law claiming that it didn’t apply to their DWI vehicle seizure program. Albuquerque police continued to seize thousands of vehicles pre-conviction and demand thousands of dollars in “fees” to secure their return. If people couldn’t pay the ransom, the department kept the vehicle.

Arlene Harjo, whose son was pulled over for suspected drunken driving, was one of many whose vehicle was taken under the city ordinance. Even though she wasn’t in the car at the time, Albuquerque police seized Harjo’s vehicle and demanded $4,000 dollars for its return. But Harjo refused to comply with the scam. She filed a lawsuit against the department with the help of the Institute for Justice, and, last week, she won. A federal judge handed down a landmark ruling that Albuquerque’s vehicle seizure program violates residents’ constitutional rights by taking their property before they’ve been convicted of a crime.

And indeed, the problem is not just in New Mexico. In 2015, the ACLU sued an Arizona county attorney and county sheriff challenging that state’s civil asset forfeiture laws, which create perverse and unconstitutional incentives for law enforcement to build multimillion-dollar slush funds that they get to control.

More than anything, this ruling out of New Mexico is a powerful reminder that brave individuals can still take a stand against systems of injustice, crack their foundations, and bring them tumbling to the ground.

All it takes is a few people like Stephen Skinner and Arlene Harjo who say, “Enough. Not today. No more.”