Growing Up Locked Down: Youth in Solitary Confinement 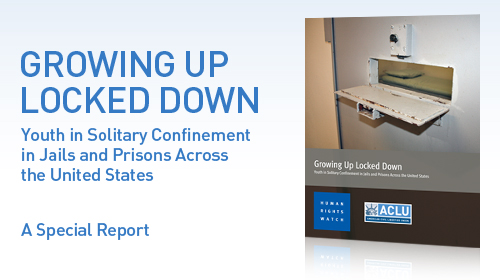 Kids are being kept in solitary confinement, often for days and weeks at a time, supposedly “for their own good” – to protect them from adult prisoners – or punish them for bad behavior. But long-term solitary confinement isn’t good for anyone. In fact, isolation can be psychologically shattering for anyone, and it is especially harmful to young people.

In a new report out today from the ACLU and Human Rights Watch, “Growing Up Locked Down: Youth in Solitary Confinement in Jails and Prisons Across the United States,” I explore how the isolation of solitary confinement causes anguish, provokes serious mental and physical health problems, and works against rehabilitation for teenagers. The report is based on my own interviews and correspondence with more than 125 young people in 19 states who spent time in solitary confinement while under age 18, as well as with jail and/or prison officials in 10 states.

You can read the report, watch a video, listen to a podcast and find out what’s happening in your state here.

The young people I interviewed for the report repeatedly described how solitary confinement compounded the stress of being in jail or prison. They spoke about cutting themselves with staples or razors while in solitary confinement, having hallucinations, and losing touch with reality. Several said they had attempted suicide multiple times in solitary.

Those allowed outside described only being allowed to exercise in small metal cages, alone, a few times a week. Several said they could not get books, magazines, paper, pens, or pencils, or attend any classes or programming. For some, the hardest part about solitary confinement was being denied visits and not being able to hug their mother or father.

As the report details, normal human contact is essential for the rehabilitation of child offenders. Based on my findings, the ACLU and HRW recommend that kids should never be held in adult facilities, but when they are, they should be held in separate areas with other kids, and never locked in solitary confinement. Positive reinforcement, small group living, and immediate and proportional interventions, as well as interactive treatment programs, are more successful at preventing problem behaviors and addressing mental health problems in youth than isolation. Solitary confinement actually provokes or worsens these problems.

We should be focused on rehabilitating child offenders so that they can become productive members of society, not treating them in a way that can cause them long-term damage.

Ian Kysel is the Aryeh Neier fellow with the ACLU and Human Rights Watch. He is the author of the report “Growing Up Locked Down: Youth in Solitary Confinement in Jails and Prisons Across the United States.”