How Do We End Racism in Policing? 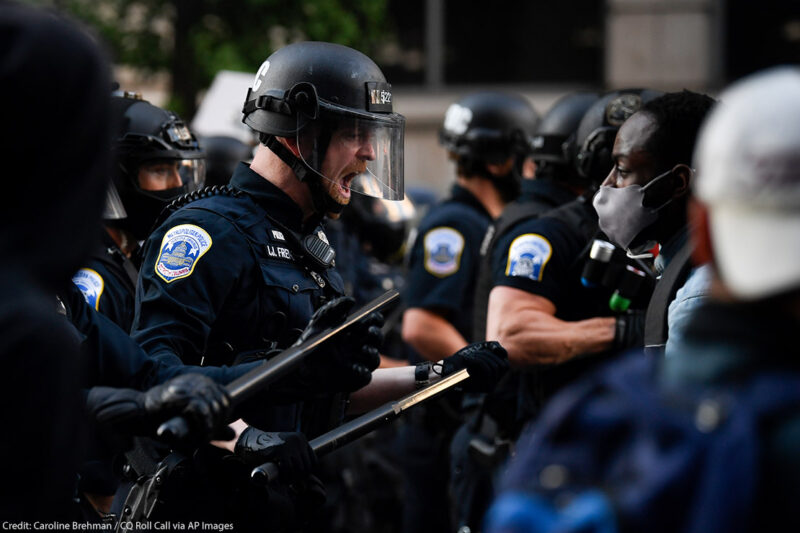 The murder of George Floyd last year was another wake-up call for many Americans about racism in policing. It was also a reminder that past efforts to address racist police practices have failed repeatedly. At the time of Floyd’s death, the police department of Minneapolis, Minnesota was attempting to reconcile and rebuild trust with the Black community, using some of its enormous $193 million budget to fund trainings on implicit bias, and other tools and tactics to reduce police violence against people of color. Yet none of this stopped Minneapolis police officers — including one of the very officers responsible for training new recruits — from murdering Floyd.

Incremental, piecemeal reforms to policing have not worked. Reducing police violence requires taking bold steps that lead to transformational change. In a town hall this week, ACLU Deputy Legal Director Jeff Robinson leads a discussion on the past, present, and future of policing with fellow ACLU policing experts Paige Fernandez and Carl Takei. The following are some key takeaways from that conversation.

What is the ACLU’s position on policing?

The ACLU is following the lead of Black-led grassroots organizations in calling for divestment from police and reinvestment in communities of color. In the past, calls for action were often limited to internal policies and training, and required investing even more money in police departments. This approach has failed repeatedly. The conversation has since shifted toward broader, big picture questions about why police play such an outsized role in the lives of Black and Brown people, and how we can change that. The vast majority of arrests are not related to the most serious offenses such as rape or homicide; they are about mental health crises, domestic disputes, quality of life offenses, and other situations that do not require police action. If we redirect resources from law enforcement to social services and other programs, we can reduce violence by reducing the role of the police in our lives.

How did the policing system become racist?

The U.S. policing system has been racist since its inception during the slavery era. The first municipal police department in the country was in Charleston, South Carolina, and it was conceived as a slave patrol to monitor and surveil the Black enslaved population and prevent them from planning any resistance efforts to achieve freedom. In the same state, a riot by enslaved people in 1639 led to the passage of a law requiring enslaved people be kept in “due subjugation and obedience.” Legislators in Virginia passed a law removing felony penalties for the murder of enslaved people who resist masters. Laws like these may not be on the books anymore, but they are still in effect when it comes to policing Black communities — from the way in which policing operates as an occupying force in these communities to the legal barriers against holding police accountable when they kill community members.

Police brutality and the resulting protests recurred throughout the 20th century. Again and again, commissions convened to examine why police brutality sparks unrest have come to the same conclusion: We must address the poverty and systemic racism that go hand in hand with policing communities of color.

What do we need to do now to reform policing?

The most urgent step the Biden administration must take is to support and sign legislation to abolish qualified immunity, a legal defense which allows police officers to engage in unconstitutional and illegal acts and escape liability except when the officer’s legal violation was so obvious that it could only have been committed by “the plainly incompetent or those who knowingly violate the law.”

President Biden must also set a federal lethal force standard in which officers can only use lethal force when absolutely necessary to prevent serious bodily injury or death, and after exhausting all de-escalation techniques. Lethal use of force should be a last resort, not the first tactic officers rely on.

In the long term, we must plan and institute alternatives to policing, particularly in situations where the usual tools of police — guns and handcuffs — are likely to make the situation worse. Communities should not be forced to rely on the police to respond to every social problem. Broader state and federal funding will bring all of these alternatives to scale.

Are there any examples of alternate models of policing in action?

In Eugene, Oregon, one in five 911 calls are addressed by CAHOOTS, a program designed to respond to severe behavioral health crises in place of the police. The program dispatches two-person teams of medics and crisis workers to provide immediate stabilization and support, as well as longer-term services including counseling, suicide prevention and intervention, and treatment for substance abuse. Not only does CAHOOTS reduce police intervention, but it saved the city of Eugene $14 million in ambulance and emergency hospitalization costs in 2019.

What lessons can we learn from the police response to the Capitol riot on Jan. 6?

The Capitol riot is an example of white supremacy at work in multiple ways — not only in fueling the rioters, but in the response from law enforcement. Despite numerous, public warnings of a violent insurrection in the days prior, Capitol Police failed to prepare for such an insurrection because they discounted the risk that a largely white crowd would attempt to storm the Capitol. This was a continuation of what we saw this past summer, when police responded with aggressive, militarized force to Black Lives Matter protesters even as they ignored or encouraged white supremacist militias that showed up as counter-protesters. The Capitol riot showed us plainly the white supremacy at the root of our policing system, and we must acknowledge it in order to truly transform the role and place of policing in American society.