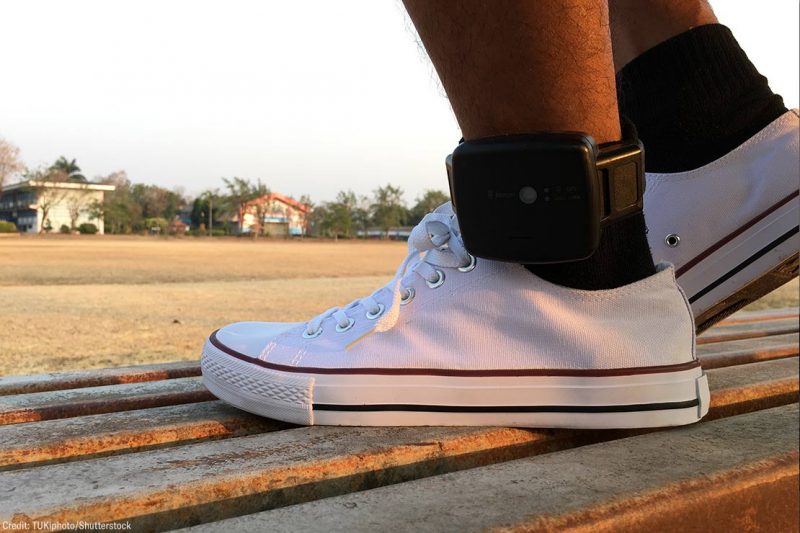 Abolishing restrictive monitoring is the next frontier of criminal, economic, and racial justice.

Kevin Jones* is sitting in a jail cell because of a faulty battery. Jones, a Black man, was released on a pending criminal charge and probation supervision and ordered by officials in Oakland County, Michigan to wear an electronic location monitoring device while he awaited further hearings in his cases. Yet, through no fault of his own, the device (called a “tether” in Michigan) failed to keep a charge due to an inexplicable malfunction. In November 2020, Jones was sleeping in his home when police officers broke in, woke him up, and arrested him for violating the conditions of his release. The violation? A dead battery.

Jones grew up in Canton, Michigan with a single mother who worked tirelessly as an EMT. He is a father of three young children who live in Ohio. When his children were newborns, he would often drive hours to pick them up, bring them back to Michigan, and keep them for two to three months at a time. His mother, Ms. Jones, recalls, “He would bring them by and asked me to babysit them and I would give him a time to get back to pick the kids up, because I have a strict bedtime regimen. If I told my son to be at my house by 9:00 p.m. to pick up the children, he would show up at 8:58 p.m., always on time.” Now that he is incarcerated, Jones’ children are missing a father. This past Father’s Day weekend, they were not able to enjoy quality time with their dad.

Jones recounts the day it all happened — the day that triggered his loss of freedom:

“My tether died when I was asleep … Police came to my home to verify that I was there, and they woke me up. I looked [and realized that] the tether had died and [so I] charged the tether back up. A week or two later, I went in for a violation hearing and the judge said they were revoking my bond, even though I was at home [where I was supposed to be] when the police found me.”

Unfortunately, that was not the last time Jones had charging difficulties. The judge gave him two weeks after the violation hearing to turn himself in. During that two-week period, the same tether died a second time, in late December 2020. Then, despite diligent his efforts to charge it, the ankle monitor died a third time, the day before Jones was supposed to turn himself in.

Throughout the various instances of battery failure, Jones kept in touch with the tether company and cooperated with authorities, informing them about the device’s malfunctions and explaining the charging problem. Despite his efforts to comply with the terms of his pretrial release, it was abruptly terminated, and he was sentenced to two years in jail without having a chance to speak at the violation hearing.

To make things worse, Jones was moved from the Oakland County Jail — a facility the ACLU has sued for its mismanagement of the pandemic — to a prison in Jackson, Michigan. Following the transfer in March 2021, Jones contracted COVID-19. Jones has underlying conditions, including asthma and a heart murmur, that make catching COVID-19 particularly dangerous. Since catching the virus, Jones reports suffering from “major headaches, coughing, and scratchy throats.” The conditions of his incarceration are poor; Jones says after employees move infected people out of the general population, “they don’t clean the cells that we were in before we were moved to the COVID-19 unit.”

Throughout this ordeal, Jones was set up to fail: ordered to wear a faulty device, and punished when the battery died — not only with incarceration, but with a deadly virus. Prior to the battery failure, Jones was merely a man on pretrial release. He was not convicted of his pending firearms charge — he was merely accused of a crime while trying to navigate the terms of his probation. Yet the repeated battery failures landed him in prison, making it all but impossible for Jones to lodge an effective defense against his pending charge.

Restrictive pretrial monitoring should alarm us all for several reasons. First, it infringes due process rights, because monitoring is often imposed by judges who do not consider whether the accused person poses a risk of failing to appear for court, or otherwise poses a danger to the community. Second, it undermines the presumption of innocence until proven guilty. Third, monitoring creates an unchecked privacy intrusion by private companies (often working at the behest of, or in partnership with, the government), and amounts to an unreasonable, warrantless search. Fourth, it impedes movement, freedom, and autonomy — preventing people from obtaining employment, finding housing, and participating in everyday social and family life. In short, once a person is accused of a crime and released on a pretrial electronic monitor, they are treated as if they committed the alleged offense, and are stripped of fundamental rights and freedoms.

As with all aspects of the criminal legal system, these burdens are disproportionately imposed on Black and Brown people. Unfortunately, Jones’ story is not an outlier: Across the nation, malfunctions areBlack Lives Matter activist Jeremy “Mohawk” Johnson has documented, via TikTok, that his ankle monitor falsely reported him away from home more than 60 times while he awaited trial in Chicago. Johnson emphasized that monitors make it difficult to find jobs, attend medical appointments, go grocery shopping, take care of family, and sleep (sometimes the device emits voice alerts in the middle of the night).

Abolishing restrictive monitoring is the next frontier of criminal, economic, and racial justice. Once touted as a reform or alternative to incarceration, the use of ankle monitors is instead helping to fuel mass incarceration and expand its reach. Ankle monitors both create circumstances where people feel pressured to plead guilty, and subject people to a long list of onerous technical violations. In many places, individuals have to pay for their own monitoring, racking up considerable costs or facing incarceration if they can’t afford them. And there is no evidence that these devices confer any benefit to public safety or prevent flight. No wonder experts like Michelle Alexander call such monitoring “the newest Jim Crow” and “e-carceration.”

Despite their considerable harms, the use of electronic monitoring is on the rise, and has increased 140 percent in the U.S. between 2005 and 2015. If this is where criminal legal reform is headed, we need all hands on deck. That’s why the ACLU is fighting to reduce reliance on electronic monitoring, to ensure broader protections for people subjected to its restrictions, and for a world in which no one is subjected to the nightmare Jones is living through.

*Names have been changed to protect the privacy of those who shared their stories.