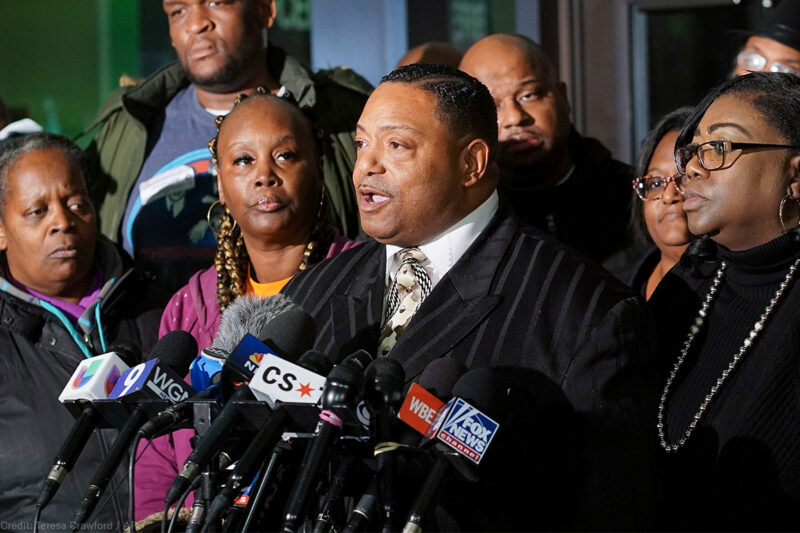 Jeffery Robinson, Executive Director, The Who We Are Project
Share This Page
January 23, 2019

Last October, a jury convicted Chicago police officer Jason Van Dyke of second degree murder and aggravated assault for killing 17-year-old Laquan McDonald. Prosecutors asked for between 18 and 19 years in prison. On Friday, however, the judge in the case, Vincent Gaughan, sentenced Van Dyke to less than seven years in prison.

In response to these events, activist William Calloway, who fought for the release of the video of the killing and related police reports, said what many Black Americans felt: “We are devastated, we’re heartbroken, but we’re not deterred… 81 months in the Illinois department of corrections, that’s a slap in the face to us and a slap on the wrist to him.”

The same week, police officers Joseph Walsh and Thomas Gaffney and Detective David March — who were charged with obstruction of justice, official misconduct, and conspiracy for lying in statements and police reports to protect Van Dyke — were found not guilty of all charges by Cook County Associate Judge Domenica Stephenson in a trial without a jury. The judicial decisions surrounding the McDonald case send a clear message: Black lives matter, they just matter less than those of white law enforcement.

While Van Dyke was charged with murder, Walsh, Gaffney, and March were accused of lying by saying McDonald was approaching Van Dyke instead of moving away from him when Van Dyke fired. The issue in both cases came down to this: Is the video of the murder an accurate depiction of what happened, or is it possibly inaccurate because it was shot from a different perspective than the one the four officers had? How did they all explain the video that shows McDonald walking away from Van Dyke and not toward him? Van Dyke’s only explanation, and the only one offered by the other three officers, was that the video did not show their perspective.

Snoop Dogg wrote, “Resident evil, it is all on camera and they still don’t believe you…” Watch the video and believe your eyes. Perspective cannot make a Black man walking away from officers look like he is running toward them. If you watch the video, your eyes will tell you Laquan McDonald was moving away from officers, and specifically away from Van Dyke. And within six seconds of leaving his car Van Dyke started firing. And 14 seconds later he had fired 16 times, and McDonald was dead.

Perspective is definitely a factor, not in terms of the location from which a person saw something but in terms of attitudes and biases a person brought to the situation. Our courts have had a perspective on the value of Black lives that has not been admirable. American courts have stripped Black lives of value going back to Dred Scott and Plessy v. Ferguson. The lynchings that occurred from after the Civil War to the late 60s were largely not investigated, and the very few prosecutions resulted in even fewer convictions. We currently have a death penalty system where the race of the victim is one of the most significant factors in whether or not a death sentence is imposed. Judicial acquiescence to the devaluing of Black lives is nothing new.

Prosecutors called Van Dyke’s sentence a “significant” one and commented on the not guilty verdicts for the other officers, said(saying), “We of course, disagree with the ruling but we respect the ruling,” adding, “we do hope that this has been a crack in the wall of the code of silence” and that officers would “think twice” before engaging in a future cover-up.

The special prosecutor did the right thing and vigorously pursued these cases, but suggesting that the results will cause officers to “think twice” before engaging in similar behavior goes too far.

First, they relate to a police department with a particularly ugly culture and history. In the 70s, under the leadership of Detective Jon Burge, CPD tortured almost 120 people into giving false confessions. The “system” tolerated that behavior until 1993 when he was fired for mistreatment of a suspect. He was not convicted of any crime until 2010.

This is also the police department that tortured Joseph Lopez for four days in the summer of 2000 until he confessed to a murder he did not commit. This is the department that sought to cover up the 2007 beating of Karolina Obrycka. In 2014, the organization We Charge Genocide submitted a report to the United Nations Committee Against Torture demonstrating that Black residents in Chicago are 10 times more likely than whites to be shot by a Chicago police officer and that in 2014 only 2 percent of 1,509 excessive force complaints resulted in a penalty of any kind.

This is the culture of the Chicago Police Department, and one the judiciary allows to persist. Van Dyke’s modest sentence for second-degree murder and the outright acquittals for Gaffney, Walsh, and March sends a message to police — hang together and officers can walk away from almost anything without too much trouble, even if it’s on video.

Excessive sentences are wrong for everyone regardless of race. But no one should try to paint Van Dyke’s sentence as the start of a new era in Chicago where people who commit murder will be treated more leniently. This is an example of how white lives are valued over Black lives. That is an injustice as large as any other one in the entire criminal legal system.

The case of Laquan McDonald reminds those of us who need reminding why there is a Black Lives Matter movement — because this nation does not value Black and white lives in the same way. We never have, and the question that sits with us now is: Will we ever?