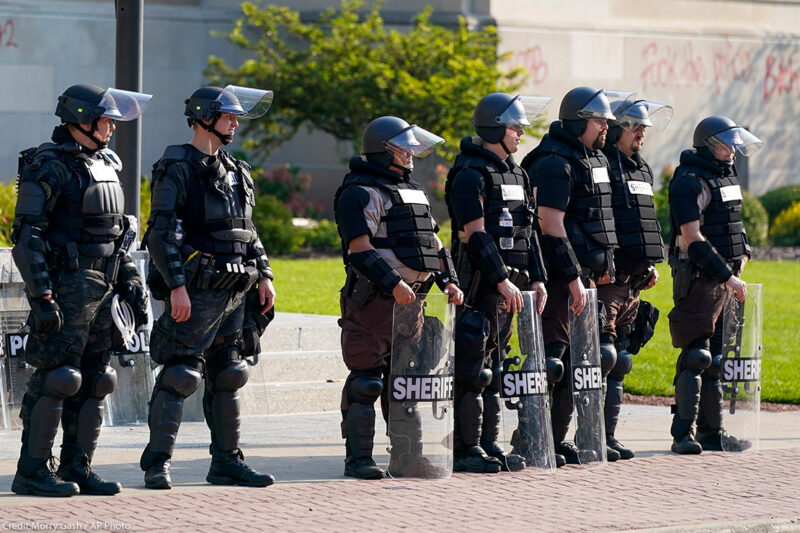 The massive show of force from 40 law enforcement agencies in Kenosha didn’t make anyone safer.

For two weeks, we’ve heard trial testimony and seen evidence of the events that occurred on August 25, 2020 — the night that Kyle Rittenhouse shot and killed two people and injured another during a Black Lives Matter protest in Kenosha, Wisconsin. While Rittenhouse was not found guilty, he was not the only one whose conduct on that deadly night should be scrutinized. The actions — and inaction — of the Kenosha Police Department and the Kenosha County Sheriff’s Department in the preceding 72 hours played a critical part in the tragic events that took place.

As we reflect on that night, we must remember what ignited these protests. Two months after the murder of George Floyd, on August 23, 2020, Kenosha Police shot a Black man, Jacob Blake, in the back multiple times, paralyzing him. Faced with this latest manifestation of law enforcement’s systemic mistreatment and disregard for the lives of Black and Brown people, people took to the streets of Kenosha. Kenosha County Sheriff David Beth oversaw law enforcement’s response to these protests, including the coordination of over 40 local, state, and federal agencies.

On the night of August 25, law enforcement not only failed to protect protestors calling for police accountability and more humane treatment of Black people, but actively put them in harm’s way. Officers enabled and encouraged predominantly white, right-wing armed civilians and militia groups that night, creating a situation in which tensions escalated and people were killed.

Following the violence in Kenosha, an investigative team at the ACLU filed approximately 40 public records requests to local, state, and federal law enforcement agencies; reviewed more than 800 records and 50 hours of video footage; and conducted over 40 in-depth interviews with community members to better understand what happened in Kenosha and how we can avoid these tragedies in the future. Here is what we found:

Kenosha law enforcement was aware of the threats that these armed civilians and militia groups posed to protestors exercising their First Amendment rights. Mathewson asked Sheriff Beth and Kenosha Police Chief David Miskinis to deputize these armed civilians and militia groups, noting that more than 3,000 people accepted the online invitation to “protect” the city. In addition to this correspondence, community members in Kenosha contacted law enforcement with concerns for their safety after reading this online vitriol. Meanwhile, the Department of Homeland Security told local law enforcement that the Boogaloo Bois, a right-wing group with a history of violence, were planning an event in Kenosha on August 24. The Federal Bureau of Investigation also warned that the conflicting ideologies of protestors and these armed civilians and militia groups could “potentially be a flashpoint for violence” the next day.

Despite the obvious safety threats, law enforcement embraced the incendiary presence of armed civilians and militia groups. In a widely seen video, law enforcement thanked and even offered water to the armed civilians and militia groups attending the protests, as they instructed those protesting police brutality to leave. In text messages retrieved through our public records requests, after someone circulated a video of the Rittenhouse shootings, a Waukesha County Sheriff’s Department officer commented “nice video” in a message to colleagues and added that he was “[l]istening to gunfire. Such a nice night.”

In fact, it appears Kenosha law enforcement coordinated an effort to push protestors south on Sheridan Road, towards armed civilians and militia groups. Ryan Thomas Balch, an armed civilian affiliated with the Boogaloo Bois, was recorded saying on the night of the shootings, “Do you know what the cops told us today? They were like, ‘We’re gonna push them down by you, because you can deal with them, and then we’re gonna leave.’” In an August 26, 2020 written statement, Balch added, “K[enosha] P[olice] D[epartment] made a conscious decision to abandon the people of Kenosha to people they felt justified in using machines and weapons of war against. And were going to piss them off and drive them at us and let the chips fall where they may.”

The Kenosha County Sheriff’s Department, led by Sheriff Beth, commanded law enforcement agencies to clear Civic Center Park and push protestors south towards the danger that lay multiple blocks from the park at the intersection of 60th and Sheridan. Multiple law enforcement officers documented their knowledge that armed civilians and militia members were concentrated in that direction, near 60th and Sheridan. Officers from various law enforcement agencies described the use of armored vehicles, foam bullets, tear gas, and flash bangs to herd protestors from the park toward the intersection, and to prevent the return of protestors to the park. After pushing the protestors south for over an hour, Kenosha law enforcement took a strategically timed break, consistent with Balch’s description. These efforts were well documented in the records our investigative team obtained:

First, entrenched racism contributed to the events that unfolded. Make no mistake, the shooting of Jacob Blake and the related protests and fatalities stem from the deep-seated white supremacy that pervades our criminal legal system. Police officers brutalizing people of color who are protesting that very brutality and leaving people of color and their supporters at the mercy of armed white vigilantes is a pattern that recalls the origin of American police in slave patrols. These patrols sought to capture and return formerly enslaved people to the violence of enslavement, and their later connections to white supremacist agitation during the Civil Rights movement are echoed in the violence seen in Kenosha. In today’s world, Black and Brown people are not only targeted by police and frequently treated as presumptively guilty, but white people brandishing weapons of war are given the benefit of the doubt and even encouraged by officers of those same police agencies.

Second, law enforcement must not be permitted to weaponize the presence of armed civilians and militia. Jacob Blake’s shooting and the subsequent tragic, fatal shootings by Rittenhouse should usher in a significant wave of change, not only in Wisconsin but across the nation. Kenosha is not even the latest example of this pattern of police ignoring (at best) or facilitating (at worst) white mob violence: Following the January 6 insurrection, it was revealed that over 30 off-duty police officers attended the rally, and several joined the mob that stormed the Capitol. We must reexamine the roles and powers of police in American society, and listen to the communities of color in Kenosha and elsewhere that are calling for new approaches to public safety that protect all people, regardless of the color of their skin.

Finally, more officers and weapons do not increase safety. Law enforcement should play no role in protests, unless it is to protect our First Amendment rights, and they should not use violence to control the crowd or silence those they disagree with. Beyond the context of protests, there is little evidence that police effectively prevent or reduce violence, while there are many alternatives to policing that do make communities safer.

As our investigation illustrates, approximately 40 local, state, and federal law enforcement agencies responded to the protests in Kenosha, utilizing various forms of force against protestors. This massive show of force failed to keep people safe — and in fact facilitated grave harm by pushing protesters into close proximity with Kyle Rittenhouse and other armed white civilians. The violence that night is a further reminder that well-resourced law enforcement agencies are failing to protect and even harming the communities they are sworn to serve. It’s time to acknowledge this failure and invest in measures that actually keep communities safe.