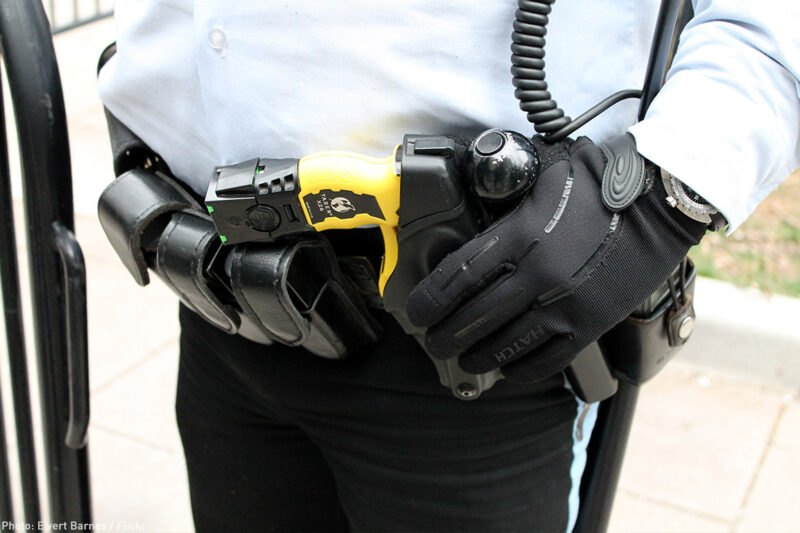 When West Milwaukee police killed Adam Trammell, a Black resident of the city, he was unarmed and alone in his locked apartment, just taking a shower. The police came because a neighbor had called them and reported that Trammel was acting “oddly.” Police arrived to do a “wellness check,” already knowing Trammell had schizophrenia. Trammell was not wanted for a crime. He was not a threat. But he wound up dead at the hands of law enforcement.

Footage from a police body camera shows what happened.

Police called out to “Brandon” — the wrong name. They got no answer, so officers broke down his front door. They found Trammell showering in the bathroom, pulled back his shower curtain, and told him to come out of the shower. When he did not respond immediately, they tased him. Trammell screamed, fell down in the shower, and passed out. As soon as he came to, police again began demanding that he exit the shower. When he sat there rocking, they tased him again. He screamed again. Over the next 30 minutes, the police tased him 18 times.

Trammell died on his living room floor. He was 22.

When police know — or should know — that they are interacting with a person with a disability, police have a legal obligation to proceed in ways that take into account the person’s disability. Most such changes are simple: recognize that it may take time for the person to understand what is happening, create a calm environment, have one person communicate simply and clearly, allow time for the person to respond to questions or instructions, and exercise patience.

In Mr. Trammell’s case, police did the opposite, escalating the situation beyond measure. And now local officials will not hold the officers accountable. The Milwaukee County district attorney, John Chisholm, decided not to charge the police officers with any crime. The chief of police, Dennis Nasci, has said he does “not see any discipline coming down for what they did.”

First, police — who carry guns and are hired and trained to enforce criminal laws — should not be the first responders for people who are having a mental health crisis. Our first choice should be mental health professionals. They are trained and equipped to interact with people in a crisis.

There are examples of this at work in select cities, where local government has chosen to employ mobile crisis patrols with people specifically trained to work with, deescalate, and help people in crisis. Eugene, Oregon, has implemented a program that dispatches teams of crisis counselors and non-police first responders — EMTs, paramedics, or nurses — to respond to emergency mental health crisis calls instead of armed officers.

Barring the availability of mobile crisis patrols, when no firearm is involved, firefighters or EMTs would be better choices than police to do ‘wellness checks’ or to engage with people in a mental health crisis. These responders do not come equipped with a gun or Taser, and their training includes interacting with people who are in crisis.

Second, for the situations when police officers actually must be involved, they need different training — not additional training. It shouldn’t be a one-week training to learn how to work with people with disabilities or a way for police to get more resources while desperately needed community services — including mental health treatment — go without. We need different police training altogether from the ground up, starting at the police academy.

In their groundbreaking report, “30 Guiding Principles on Use of Force,” they highlight the need for different training as well as a different policing culture. Nationally, police academies spend an average of 58 hours on firearm training but a mere 8 hours on de-escalation or crisis intervention. The PERF report explains that police culture emphasizes a “command and control” approach to every situation. But they point out that — absent an active shooter or a crime in progress — such an approach is likely to endanger lives. Taking time, assessing the situation, and responding calmly and appropriately are not just better for the public, it is better for the officers as well.

Third, we need accountability. When police unlawfully take a life, district attorneys need to file charges. If they do not file charges, we need to vote them out. Police chiefs need to provide training, guidance, and policies so that officers are trained to assess situations, de-escalate problems, and keep themselves and the public safe. Police chiefs need to remove officers who react with violence instead of calm, whose fear or bias provokes irrational and dangerous responses to people in crisis and people of color.

The crisis of police killings will not abate if officials refuse to enact these simple, obviously needed solutions. People with disabilities will continue to have their rights violated, and they will continue to die, if police can enter their homes, drag them from their showers, and kill them without consequence.