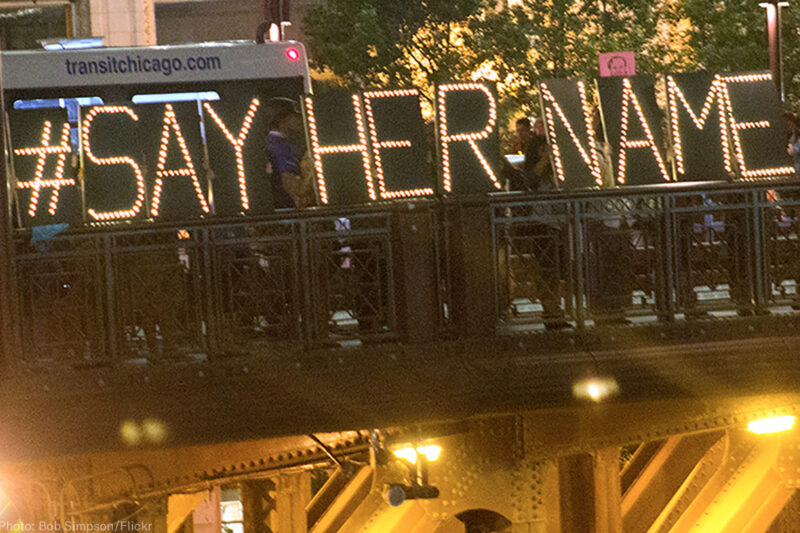 “Put a copy of your driver’s license, registration, and insurance on the dashboard.” That’s what I tell my guy friends when they make their 300-mile road trip for homecoming. “Stay on the sidewalk and keep out of the alley.” That’s what I tell the boys in the neighborhood as they consider a shortcut to the park.

These are survival tactics that Black men and boys have incorporated into their everyday lives. These are precautions to take so that summer play and fall traditions are not compromised by incidents with the police. Black women — mothers, sisters, daughters, friends, and partners — have offered and echoed this advice (and experienced the trauma that comes from giving this advice) for years.

We haven’t been giving ourselves the same advice, however. And though the Black Lives Matter movement was started by three Black women, we’ve largely been left out of the national narrative on police violence. Police violence impacts Black women and other women of color just as it does Black men. So sadly, we too need survival tactics for our teen girls attending pool parties and our girlfriends eating at the Waffle House.

We need advice on how to handle encounters with the police that can quickly turn violent and even deadly. Black women, like Charleena Lyles in Seattle, were pregnant when killed by police. They were experiencing mental health crises, like Shukri Ali in Georgia and Deborah Danner in New York. They were hanging out with friends, like Rekia Boyd in Chicago. They had merely taken a wrong turn while driving, like Mya Hall in Maryland and Miriam Carey in Washington, D.C. And Black girls, like Aiyana Stanley-Jones in Detroit, were doing nothing more than sleeping when killed by police.

We must also consider other forms of police violence that impact Black women and women of color, like sexual assault. Sexual abuse is the second most reported form of police misconduct after use of excessive force. The conviction of an Oklahoma City officer for the rape and sexual assault of 13 Black women represents some of the anecdotal evidence of how Black women experience sexual violence by police.

Police violence continues to happen to Black women and girls. As Andrea Ritchie describes it, “Black women’s mere presence, speech, and protest of mistreatment … [are] a threat that officers meet with physical or even deadly force.” This must be acknowledged. This must be part of the national discourse. We need this understanding to change the laws, policies, and practices that govern policing.