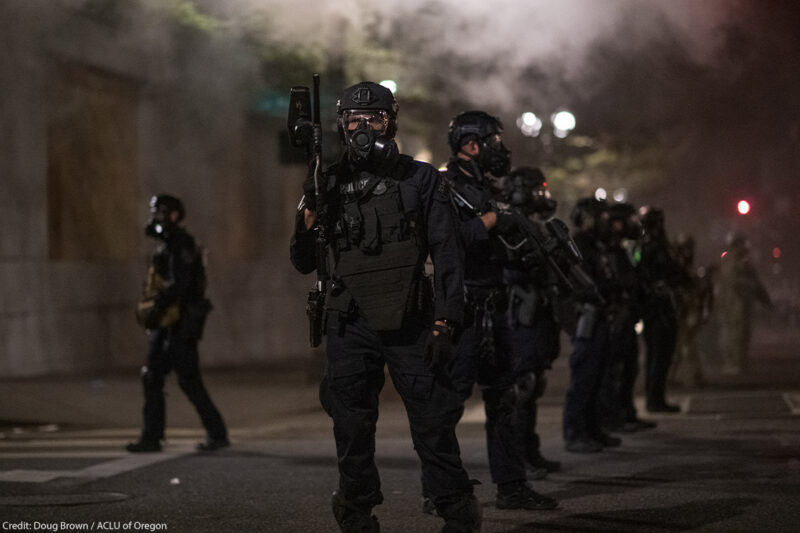 Day after day, night after night, protesters have been taking to the streets since the police killing of George Floyd. Led by local Black activists and grassroots groups, they’re chanting, singing, shouting, kneeling, marching, and even laying on the ground to demand justice for the many Black lives that have been taken by police. Everyone — from parents, grandparents, kids, and more — are showing up.

But Donald Trump from day one has expressed extreme hostility towards the Black Lives Matter movement. He has called on NFL owners to retaliate against players who dared to kneel in protest, said it was “terrible” to ask why Black Americans are still dying at the hands of law enforcement in this country, compared police killing and injuring Black people to golfers who “choke,” and has called for law enforcement to “dominate” protesters demanding that our legal system value Black lives. He has even encouraged police to abuse people in their custody.

As the movement and calls for change gain broader support from more Americans and people around the world, protesters are being met by even more brutality — in many cases by the same police departments whose racism and brutality they are protesting. Police and federal agents are spreading fear and panic in communities, threatening lives, and relentlessly attacking people simply exercising their First Amendment right to protest police racism and brutality. Law enforcement at all levels haven’t even spared U.S. military veterans, journalists, legal observers, and medics. This assault on the First Amendment has only escalated tensions, and emboldened white supremacists to spread terror and hate.

The ACLU is taking to the streets, legislatures and courts nationwide to demand an end to police violence and accountability for rights violations. Here is just a partial running list of federal and local law enforcement abuses against individuals exercising their First Amendment rights in Portland, Oregon:

Our client Christopher David, a US Navy veteran, asked federal agents in Portland why they weren’t upholding their oath to the Constitution.

They beat and gassed him in response.

He’ll now have to get his answer in court.

A police officer runs ahead of his line, tackles a protester, and starts punching them on the ground

We’re witnessing similarly alarming and dangerous tactics being deployed in Kenosha, Wisconsin as people take to the streets to demand accountability and transformational change within the police and sheriff’s departments. This comes after police attempted to murder Jacob Blake by shooting him seven times in the back, fraternized with heavily-armed white supremacist militias during protests, and then let a white man who shot and killed two protesters walk away from the scene of the shooting.

There are multiple reports of law enforcement in unmarked vehicles with tinted windows and officers making arrests in Kenosha without identifying themselves or wearing insignia to identify their law enforcement agency. Kenosha police have also indiscriminately fired chemical and other weapons, including tear gas, pepper spray, rubber bullets, and pepper balls at protesters. We’re also receiving reports of protesters being arrested for violating curfew, and having possessions, like their cell phones, confiscated and not returned to them.

Notably, all of this is taking place in a county that has a history of severe racial disparities in policing; Black people in Kenosha County are 6.9 times more likely to be arrested for marijuana possession than white people — almost double the national racial disparity in such arrests.

This is a fight for our democracy. The answer to protests over police brutality cannot be more brutality. We are unleashing the full firepower of the ACLU to defend our rights — in Portland, in Kenosha, and nationwide. We won’t be silenced.