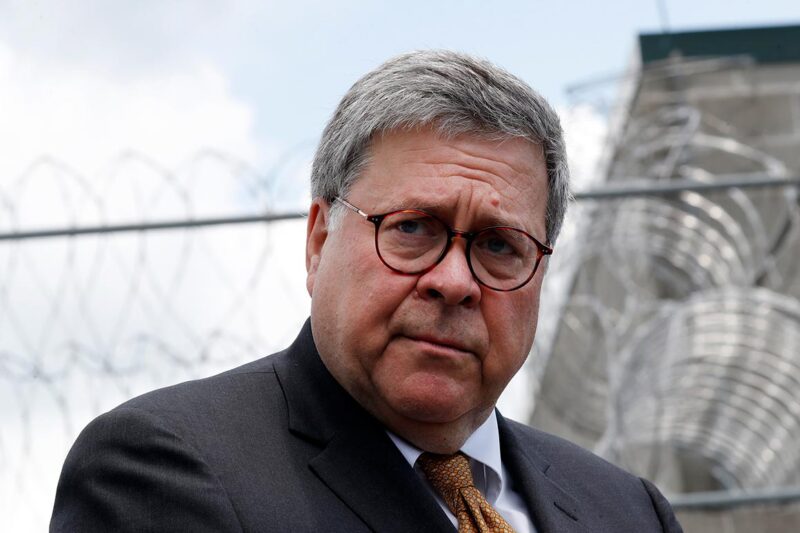 Almost five years to the day of the fatal police shooting of Michael Brown in Ferguson, Missouri, Attorney General William Barr descended on New Orleans to deliver a major policy address. His speech dismissed police violence and espoused a dangerous vision for America — one in which ‘90s era tough-on-crime politics shape policies and pro-civil rights attitudes are derided as “anti-police.”

Speaking to the Fraternal Order of Police (FOP), Barr used war analogies to describe the work of police officers, painting opponents of police brutality as a “vocal minority that regularly attacks the police.” He minimized the type of police violence and racism — like that which took Michael Brown’s life — as being the result of “a few bad apples.” This phrase has been used as code to distract from deeply systemic issues that protect and perpetuate the devaluing of Black and brown lives in the criminal legal system.

Barr suggested that the problem of police violence is with the victims for not complying with police demands — an assertion recognized as odiously false by those who followed the murders of Philando Castile and many others. He went on to disparage the new wave of reform-oriented prosecutors who won elections by espousing fair and smart justice policies as “anti-police” and “dangerous to public safety.”

Yet, to those who have seen the epidemic of police abuse and the devastating impact of mass incarceration, we know that Barr is wrong. His speech was a slap in the face to families who have suffered from police violence and to voters who have organized around and elected prosecutors committed to tackling mass incarceration.

It should come as little surprise that Barr advocates for the death penalty and even greater mass incarceration. In 1992, while serving his previous term as AG, Barr published a report titled, “The Case for More Incarceration,” arguing for more prisons and longer sentences. The report was a major boost to mass incarceration in America as it provided the Justice Department stamp of approval. Based on this week’s speech, little has changed in Barr’s views since 1992.

Barr delivered his speech before a friendly crowd of FOP officers because he knew that his rhetoric wouldn’t fly with a general audience. Polls consistently show that Americans on both the left and right prefer smart justice policies: Three-quarters of voters say they would vote for a candidate committed to criminal justice reform; eighty-nine percent of voters support prosecutors who want to cut mass incarceration.

The reform-oriented prosecutors derided by Barr ran on sensible policies of using incarceration only as a last resort. They ran on the commonsense idea to offer rehabilitation services to people suffering from drug addiction, rather than incarceration. They promised to end the criminalization of poverty and predatory practices like cash bail and fines and fees that lead to incarceration because of inability to pay.

Barr would have you believe that reform policies negatively impact public safety, but decades of data show that, actually, the opposite is true: Between 2007 and 2017, 34 states have reduced both incarceration and crime. Keeping families together and people out of prison and jail is key to building healthy, safe communities. Yet more is needed, as the United States continues to imprison its people at rates much higher than comparable countries.

The policies espoused by Attorney General Barr created today’s mass incarceration crisis, disproportionately locking up people of color and poor people. The War on Drugs and a tough-on-crime mentality have devastated communities across the nation, and have led to the United States being the world’s biggest jailer, with 2.3 million people incarcerated on any given day. In fact, the state where Barr delivered his speech, Louisiana, has the second-highest incarceration rate per capita in the world. Until the implementation of recent bipartisan reforms, which Barr would have almost certainly opposed if in office, Louisiana had the highest incarceration rate in the world.

Barr’s speech before a conference room of police officers was not about public safety. It was about creating a climate of fear, where police officers are “manning the ramparts” between — as he put it — “chaos and carnage on the one hand, and the civilized and tranquil society we all yearn for,” and incarceration is the primary solution to all of society’s problems, including mental illness, poverty, and drug addiction.

What scares Barr the most is that the politics of mass incarceration are beginning to change. Fear-mongering rhetoric no longer resonates with voters in the ways that it did in the ‘80s and ‘90s. Americans have been influenced by movements like Black Lives Matter, and understand the devastating impact that mass incarceration has had on millions of lives. Voters recognize that the War on Drugs and Broken Windows policing have failed: Seventy-eight percent are more likely to vote for a candidate who supports criminal justice reform, including 71 percent of Republicans.

Americans are ready for change. We are not proud of the fact that we have less than five percent of the world’s population, yet more than 20 percent of the world’s prisoners. This is why in 2018 alone, criminal justice reform won in the ballot box, and 122 criminal justice reform bills passed in state legislatures that will result in thousands of fewer people incarcerated.

Attorney General Barr is stuck in the 1990s. But Americans have moved forward, and we are ready for fewer prisons and more dignity and humanity in our justice policies, not to mention the safety that comes along with it.