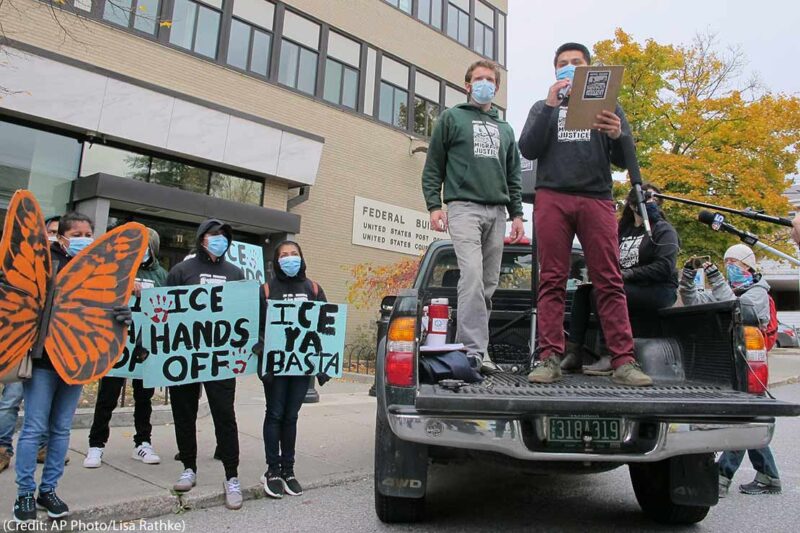 This blog is the third in a series outlining a reimagined, just, and humane immigration system for the United States.

Last year I met with a woman while she was jailed in an immigration detention site near Miami, Florida. She told me about her 5-month-old baby, whom she hadn’t seen in three months. She said that her husband, a U.S. citizen, had been driving her to Walmart when local police questioned them during a random traffic stop. She was not accused of a crime, and she was in the process of petitioning for residency based on her marriage to a citizen. Despite this, police took her to a local jail and detained her for Immigration and Customs Enforcement (ICE) — even though it was unlawful to do so.

When local police act as ICE’s force multipliers, an ordinary police encounter like the one above can ruin a person’s life and tear a family apart. That is why millions of people across the country live in fear of encountering police or other law enforcement as they go about their daily lives. Immigrants, their family members, and their friends are all less likely to come forward as witnesses, provide crime tips, or seek police protection for fear of immigration enforcement. That means everyone is less safe.

The Biden administration must dismantle the federal programs that are to blame. By doing so, the Biden administration will signal to cities and counties across the country that they are right to redirect local resources to pressing needs — like the pandemic — and away from local police taking on federal immigrant enforcement.

The Trump administration drastically increased the number of 287(g) agreements, from 34 at the end of 2016 to 151 as of November 2020, including a new form of the agreement called the Warrant Service Officer program. President-elect Biden has already pledged to “[e]nd the Trump administration’s historic use of 287(g) agreements” because they “undermine trust and cooperation between local law enforcement and the communities they are charged to protect.” He must follow through on that commitment.

The Biden administration should also end the use of ICE detainers, which are requests for non-ICE law enforcement agencies to jail people for an additional 48 hours after when the person is legally entitled to be released from criminal custody, for instance, after posting bail or having charges dropped, so that ICE can pick them up. Detainers are check-box forms developed and issued by ICE agents. They are not judicial warrants, and they are never reviewed by a judge or anyone outside of ICE. They are often based on unreliable information, including inaccurate databases. As a result, the ACLU and other organizations have documented thousands of cases of U.S. citizens erroneously held based on ICE detainers.

The Trump administration vilified communities that opted out of collaboration with immigration enforcement as part of its anti-immigrant push against so-called “sanctuary cities.” It even threatened to block state and local governments’ access to COVID-19 resources unless they agreed to aid federal immigration enforcement. Using taxpayer money, ICE launched billboard campaigns in swing states just before the presidential election.

Those billboards spotlighted “at-large immigration violators who may pose a public safety threat” for whom there was an ICE detainer. In reality, the most recent available data shows that only 26 percent of detainers target people with any criminal conviction, when traffic violations and marijuana possession violations are excluded. Further, a person who completed their criminal sentence should not be treated as an ongoing public safety threat; nor should a person be treated as dangerous based solely on the fact of their arrest.

The Trump administration’s public safety warnings about so-called “sanctuary cities” have no evidentiary basis. An October 2020 Stanford University study confirms that “sanctuary” policies have not led to an increase in crime.

Local law enforcement agencies face tremendous financial liability for honoring ICE detainers, as numerous cases and settlements show. In October 2020, Los Angeles County settled a class action lawsuit for $14 million. Yet state legislatures around the country have passed laws forbidding local officials from opting out of detainers or immigration enforcement more generally. The Biden administration can’t undo these state laws, but by ending the use of detainers it can prevent this federal program from being weaponized against communities that are trying to create a welcoming space for immigrants.

The Biden administration should also end the Secure Communities program. Right now, when local police arrest an individual and share fingerprint information with the FBI, it’s also shared with ICE and can trigger an ICE detainer — even if the arrest was illegal or if the criminal charge is ultimately dismissed. By ending Secure Communities, the Biden administration would be honoring the choices of local governments not to participate in this deportation pipeline.

Dismantling these programs will send a powerful signal to immigrant communities: the Biden administration will not continue Trump’s agenda of xenophobia and abuse.