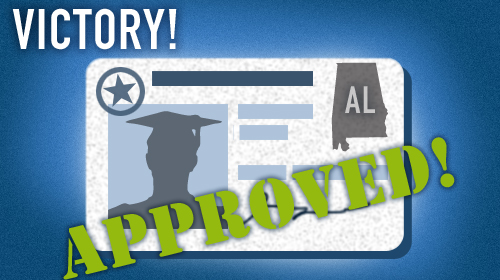 Alabama officials have announced that young immigrants who came to the country as children—also known as DREAMers—will be allowed to apply for state driver’s licenses. The decision affects an estimated 10,000 to 20,000 DREAMers who stand to benefit from the federal government’s Deferred Action for Childhood Arrivals (“DACA”) program.

The decision is a huge victory for young immigrants like Victor Palafox, a community organizer and aspiring history teacher who lives in the suburbs of Birmingham. Born in Mexico City, he was raised in Alabama, and is actively involved with helping organize communities throughout the state. Alabama’s decision will help Victor and DREAMers like him get on with their daily lives—drive to work, go to church, buy groceries, and attend school—and make even greater contributions to their communities.

Check out the video of Victor taken last year for Time magazine, before he was granted DACA, here.

With its decision, Alabama joins the chorus of states that have gotten with the DACA program and decided to let the DREAMers drive. Like Alabama, many states limit driver’s licenses to immigrants who can show they are “authorized” or “legally present” in the United States. Consistent with guidance from the federal government, overwhelming majority of states have rightly acknowledged that immigrants granted DACA are legally authorized to be in the country, and thus eligible for driver’s licenses.

Today’s announcement reaffirms that states have no business denying someone like Victor a license on the theory that he somehow isn’t allowed to be here. Indeed, only two states—Arizona, where the ACLU has filed suit, and Nebraska—remain committed to these discriminatory restrictions. Indeed, everyone has an interest in making sure that young drivers have passed the proper tests and are licensed to be on the road. Licensing promotes public safety and reduces insurance costs. And states have every incentive to adopt policies that welcome, rather than marginalize, immigrant communities.

For more information on how individuals granted DACA can apply for driver’s licenses in Alabama, visit the Alabama Coalition for Immigrant Justice.