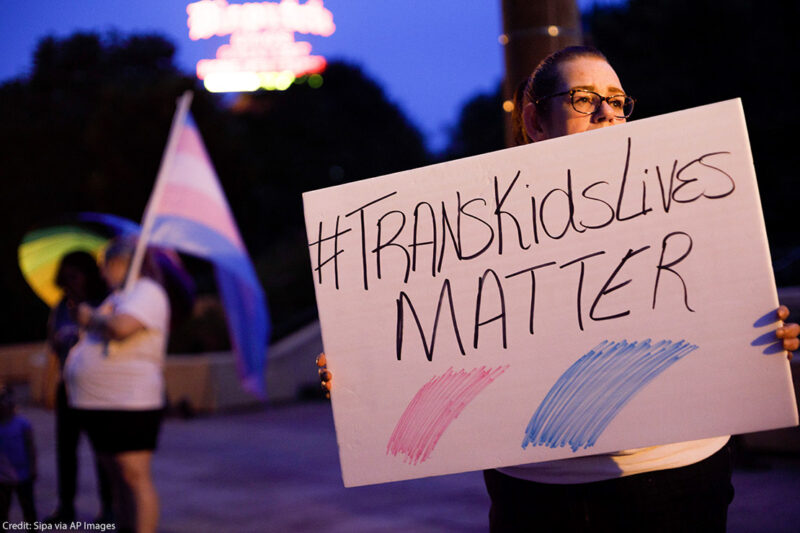 Their daughters are among the transgender people in Alabama who will be denied care under a new law that makes providing gender-affirming care to trans youth a felony.

Although they have never met one another, Jeff Walker and Jeff White have a lot in common. Both have called Alabama home for decades and have built their lives around raising a family there. Both were unsure about what to do when each of their daughters said, “I’m transgender.” But both of them, along with their wives, Lisa Walker and Christa White, refused to give into fear. They listened to their daughters, they learned from them and others, and above all else they continued to love and support their children.

Now, both dads fear they might have to leave their home state to do what’s best for their kids.

That’s because earlier this month, Alabama has made it a felony, punishable with up to 10 years in prison, to provide medically necessary care to trans youth. But rather than be driven out, these families are choosing to courageously challenge this unjust and harmful law.

We recently sued in Alabama on behalf of the White and Walker families to stop this law from going into effect. This is the seventh challenge to an anti-trans law we have brought since 2020, along with our lawsuit blocking Texas Gov. Greg Abbott’s directive to investigate families with trans kids for child abuse.

Even when a bill doesn’t pass or is blocked by courts, we know the consequences are grave. A leading suicide prevention organization says “the escalation of state policies that are harmful to LGBTQ people will only heighten and intensify experiences of rejection and discrimination and could lead to an increase in suicidal ideation.” Another organization reports increases in messages by LGBTQ+ youth to their crisis prevention hotline when anti-trans bills are introduced in the youth’s state. Trans youth, their parents, their doctors, and their teachers around the country are living in fear of being forced out of their state or their job.

We will continue to fight in state legislatures and courts, but the true measure of our work must be preventing these laws from being introduced in the first place.

We want more people to learn what Jeff Walker and Jeff White learned: that the medical care their daughters are receiving has been prescribed to cisgender adolescents for decades; that providing this care to transgender youth is supported by every major medical association; that this medical care is safe and effective; and when transgender youth are denied this care, it is more likely they will experience depression, struggle in school, and consider suicide.

Ultimately, like so many parents, these families decided to love their children and ensure that they are able to thrive.

The families report that when their daughters started to work with doctors, the team of health care providers were respectful, informative, and supportive. The providers assessed the girls to learn about their individual and unique needs. They gave the families truthful and unbiased information about what research has shown to be safe and effective medical care for young trans people. The families asked questions. The healthcare teams patiently answered. And, in the end, these two families decided on the best course of action to take for their kids.

Since accessing medical care, their daughters have grown more confident and are performing better in school. They are still the same people that they have always been — H.W. continues to love politics, and C.W. continues to love video games. But now, they are able to live more openly as their true selves and have become more connected with their families.

Jeff, Lisa, Jeff, and Christa are not alone. Parents around the country have spoken up in support of their transgender kids in the wake of the political and legislative attacks.

If our litigation doesn’t succeed, some families with the means to do so will move out of state to protect their kids. But many families with trans kids won’t have that option. For them, this lawsuit will determine whether they can continue to get the care they need, or whether they will be barred from accessing that care until 19, the age of majority in Alabama.

Trans youth need adults to speak up and say these attacks must end. If you want to speak up but don’t know what to say, we have a guide to talking about attacks on trans youth.