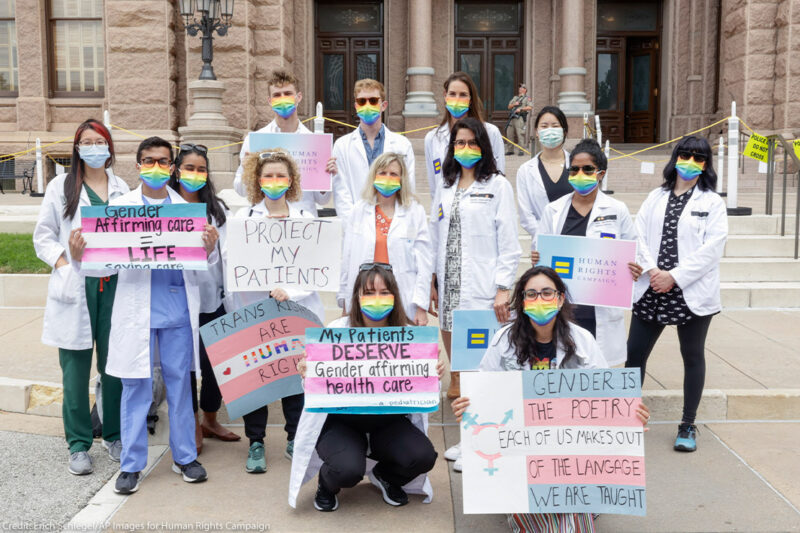 Families in Texas are worried that supporting their transgender kids will lead to a report of child abuse. We are already seeing families being investigated. Gender-affirming care is medically necessary, saves lives, and shouldn’t be the subject of an investigation.

Texas Gov. Greg Abbott and Attorney General Ken Paxton told trans youth in Texas last week that they considered their health care to be a form of child abuse. This is dangerous, dehumanizing, and terrifying to trans youth and their supportive families. The declaration will have devastating consequences — and we are already seeing them. Abbott and Paxton, along with the Texas Department of Family and Protective Services, want to investigate families simply for following best practice medicine and supporting their trans kids through lifesaving, medically necessary health care. Texas political leaders lack the legal authority to enforce this declaration and separate trans youth from their families. But that hasn’t stopped investigations from starting.

That’s why we are in court asking for a temporary restraining order to prevent Texas from investigating families for supporting their trans kids and to prohibit requiring professionals who work with youth to report these families.

In addition to being outside of the scope of their authority and clearly motivated by partisan politics, this policy is wrong and is opposed by health care professionals and child welfare experts. It also isn’t isolated — while particularly extreme and cruel, Texas politicians are part of a coordinated effort to shame, dehumanize, and attack trans kids. The end result won’t be that fewer kids grow up to be trans, it will be that fewer kids grow up.

While dozens of states have proposed laws similar to what became law in Arkansas — including some like Alabama that have proposed criminal penalties for providing gender-affirming care to youth — Texas is the only state saying that providing this lifesaving care could lead to a child being removed from their family and placed in the foster care system.

No one should have to fight this hard for lifesaving care. Rather than making medical care more affordable and accessible to people who need it, Texas is adding yet another barrier, one that will land hardest on Black and Indigenous families. These Texas families are already over-policed and surveilled by the so-called child welfare system, and other governmental policing apparatuses will have the most immediate impact on them.

Many trans youth and their families are already facing scrutiny. They fear this move will lead to more calls to child protective services about parents who are simply trying to love and support their children and keep them alive and well. There are many problems with how the child welfare system — or as some call it the family regulation system — works and this shouldn’t be added to those lists.

According to our clients, this has already begun. At least one family had a child welfare investigator show up on their doorstep last week. Reports are coming in from across the state that investigations are ramping up.

Doctors and medical and mental health associations have spoken out against these actions by Texas officials, as well as the many bills advancing across the country that would ban gender-affirming care. Child welfare professionals are also speaking out, explaining that these actions from Abbott and Paxton do nothing to protect kids and strain the existing child welfare system.

Many trans kids and their parents already live in fear.

Many families in Texas already keep folders of their medical records and doctor recommendations with them out of concern of being reported to authorities for supporting their trans kids. Families in Texas aren’t alone — with dozens of states attacking trans youth, including some which have proposed criminalizing medical care, it is an unfortunately common practice. No one should have to pick up their family and move just to support their kid and access medical care. And while families in Texas are considering this, they are all asking where is safe for them as 39 states have introduced legislation attacking trans youth this year.

Anytime a policymaker spreads the lies and misinformation about trans people and our medical care, it’s dangerous. It tells trans people that our existence isn’t real, that we should be ashamed, and that we should be fearful. It also tells our families and communities to reject us and report us to the state — only escalating the interpersonal violence that too many trans people face.

Trans youth need you to speak up across the country.

All of these reasons and more are why we have asked courts to immediately block Texas from investigating families simply for loving and supporting their trans kids. But because these attacks aren’t limited to Texas, we need to take action around the country.

As attacks have escalated in recent years, and especially in these last few weeks, we are tired. Trans youth need you to take the fury you have over what’s happening in Texas and share it with lawmakers in every state that is trying to make it harder for trans youth to live.

Around the country we see laws that aim to make being trans shameful by removing any mention of our existence in books and schools. We see laws that try to push trans youth out of schools by banning us from bathrooms and sports teams. And we see the laws trying to criminalize our medical care. It’s not by chance that we are seeing these attacks on multiple fronts at the same time — this is a coordinated, dangerous effort that is leading to an increase in calls to suicide lines for youth.

If you don’t know what to say, check out this video with my friend Miss Peppermint and fellow ACLU attorney Taylor Brown. Donate to local trans-led organizations and find your local ACLU affiliate for ways to take action in your state. Share resources like TX Trans Kids so more people know their rights and how to provide support. Ask those running for office what they are going to do to protect trans youth — and tell them their answer matters to you.