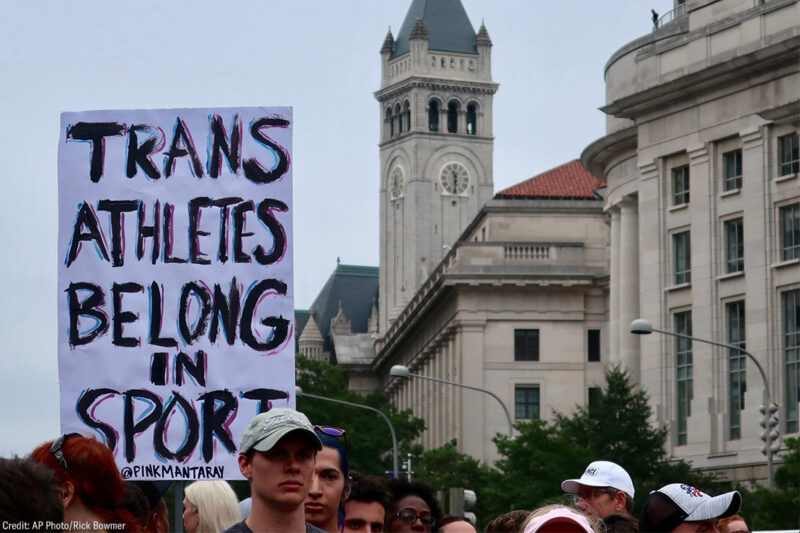 For years state lawmakers have pushed legislation attempting to shut trans people out of public spaces. In 2020, lawmakers zeroed in on sports and introduced 20 bills seeking to ban trans people from participating in athletics. These statewide efforts have been supported through a coordinated campaign led by anti-LGBTQ groups that have long worked to attack our communities.

Before the COVID-19 pandemic shut down most state legislatures, Idaho became the first state to pass a sweeping ban on trans people’s participation in athletics from kindergarten through college. We, along with our partners, immediately sued. Advocates across the country are gearing up to continue the fight against these harmful bills in legislatures when they reconvene. In Connecticut, the ACLU is defending the rights of transgender athletes in a lawsuit brought by cisgender athletes seeking to strike down the state’s inclusive policy.

Though we are fighting every day in the courts and in legislatures, upholding trans rights will take more than judicial and legislative action. It will require rooting out the inaccurate and harmful beliefs underlying these policies. Below, we debunk four myths about trans athletes using the expertise of doctors, academics, and sports psychologists serving as experts in our litigation in Idaho.

FACT: Including trans athletes will benefit everyone.

Many who oppose the inclusion of trans athletes erroneously claim that allowing trans athletes to compete will harm cisgender women. This divide and conquer tactic gets it exactly wrong. Excluding women who are trans hurts all women. It invites gender policing that could subject any woman to invasive tests or accusations of being “too masculine” or “too good” at their sport to be a “real” woman. In Idaho, the ACLU represents two young women, one trans and one cis, both of whom are hurt by the law that was passed targeting trans athletes.

Further, this myth reinforces stereotypes that women are weak and in need of protection. Politicians have used the “protection” trope time and time again, including in 2016 when they tried banning trans people from public restrooms by creating the debunked “bathroom predator” myth. The real motive is never about protection — it’s about excluding trans people from yet another public space. The arena of sports is no different.

On the other hand, including trans athletes will promote values of non-discrimination and inclusion among all student athletes. As longtime coach and sports policy expert Helen Carroll explains, efforts to exclude subsets of girls from sports, “can undermine team unity and also encourage divisiveness by policing who is ‘really’ a girl.” Dr. Mary Fry adds that youth derive the most benefits from athletics when they are exposed to caring environments where teammates are supported by each other and by coaches. Banning some girls from athletics because they are transgender undermines this cohesion and compromises the wide-ranging benefits that youth get from sports.

FACT: Trans athletes do not have an unfair advantage in sports.

Women and girls who are trans face discrimination and violence that makes it difficult to even stay in school. According to the U.S. Trans Survey, 22 percent of trans women who were perceived as trans in school were harassed so badly they had to leave school because of it. Another 10 percent were kicked out of school. The idea that women and girls have an advantage because they are trans ignores the actual conditions of their lives.

Trans athletes vary in athletic ability just like cisgender athletes. “One high jumper could be taller and have longer legs than another, but the other could have perfect form, and then do better,” explains Andraya Yearwood, a student track athlete and ACLU client. “One sprinter could have parents who spend so much money on personal training for their child, which in turn, would cause that child to run faster,” she adds. In Connecticut, where cisgender girl runners have tried to block Andraya from participating in the sport she loves, the very same cis girls who have claimed that trans athletes have an “unfair” advantage have consistently performed as well as or better than transgender competitors.

“A person’s genetic make-up and internal and external reproductive anatomy are not useful indicators of athletic performance,”according to Dr. Joshua D. Safer. “For a trans woman athlete who meets NCAA standards, “there is no inherent reason why her physiological characteristics related to athletic performance should be treated differently from the physiological characteristics of a non-transgender woman.”

MYTH: Sex is binary, apparent at birth, and identifiable through singular biological characteristics.

There is no one way for women’s bodies to be. Women, including women who are transgender, intersex, or disabled, have a range of different physical characteristics.

“A person’s sex is made up of multiple biological characteristics and they may not all align as typically male or female in a given person,” says Dr. Safer. Further, many people who are not trans can have hormones levels outside of the range considered typical of a cis person of their assigned sex.

When a person does not identify with the sex they were assigned at birth, they must be able to transition socially — and that includes participating in sports consistent with their gender identity. According to Dr. Deanna Adkins, excluding trans athletes can be deeply harmful and disruptive to treatment. “I know from experience with my patients that it can be extremely harmful for a transgender young person to be excluded from the team consistent with their gender identity.”

FACT: Trans people belong on the same teams as other students.

Trans people have the same right to play sports as anybody else. “For the past nine years,” explains Carroll, “transgender athletes have been able to compete on teams at NCAA member collegiates and universities consistent with their gender identity like all other student-athletes with no disruption to women’s collegiate sports.”

Excluding trans people from any space or activity is harmful, particularly for trans youth. A trans high school student, for example, may experience detrimental effects to their physical and emotional wellbeing when they are pushed out of affirming spaces and communities. As Lindsay Hecox says, “I just want to run.”

According to Dr. Adkins, “When a school or athletic organization denies transgender students the ability to participate equally in athletics because they are transgender, that condones, reinforces, and affirms the transgender students’ social status as outsiders or misfits who deserve the hostility they experience from peers.”

Believing and perpetuating myths and misconceptions about trans athletes is harmful. Denying trans people the right to participate is discrimination and it doesn’t just hurt trans people, it hurts all of us.