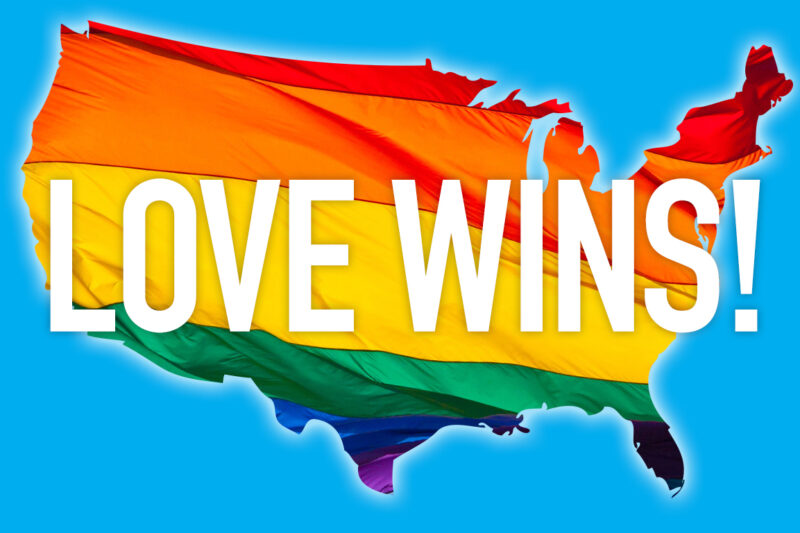 In Obergefell v. Hodges, on this day, marriage equality comes to the entire nation.

“The nature of injustice is that we may not always see it in our own times. The generations that wrote and ratified the Bill of Rights and the Fourteenth Amendment did not presume to know the extent of freedom in all of its dimensions, and so they entrusted to future generations a charter protecting the right of all persons to enjoy liberty as we learn its meaning. When new insight reveals discord between the Constitution’s central protections and a received legal stricture, a claim to liberty must be addressed.”

Today the Court determined our constitutional guarantees of due process and equal protection prohibit states from excluding same-sex couples from marriage.

Citing the Massachusetts Supreme Judicial Court’s opinion from nearly 12 years ago in Goodridge, the Court today affirmed that by fulfilling “yearnings for security, safe haven, and connection that express our common humanity, civil marriage is an esteemed institution, and the decision whether and whom to marry is among life’s momentous acts of self-definition.”

Of course, so many fought so hard to make today’s historic decision happen.

It was only nine years ago that, in a devastating opinion, New York’s highest court upheld the state’s exclusion of same-sex couples from marriage, concluding that “[t]he Legislature could rationally believe that it is better, other things being equal, for children to grow up with both a mother and a father.”

That argument – that kids fare worse when raised by same-sex couples – has since been discredited at trials in Arkansas, Florida, California, and, most recently, in Michigan. Sociologist and expert for the states, Mark Regnerus, tried to revive this theory in recent years, particularly in the aftermath of United States v. Windsor. The position was dealt a final blow and abandoned after trial in DeBoer v. Snyder, a case brought by a team of Michigan lawyers, during which the ACLU’s own Leslie Cooper demolished him on cross-examination. The District Court in DeBoer concluded that Regnerus’s testimony regarding the welfare of children raised by same-sex couples was “entirely unbelievable and not worthy of serious consideration.”

Courts around the country shared that view, striking down marriage bans, affirming the dignity of same-sex couples, and paving the way to today’s decision.

Judge Posner of the United States Court of Appeals for the Seventh Circuit ruled that: “The challenged laws discriminate against a minority defined by an immutable characteristic, and the only rationale that the states put forth with any conviction—that same-sex couples and their children don’t need marriage because same-sex couples can’t produce children, intended or unintended—is so full of holes that it cannot be taken seriously.”

But for far too long, far too many people took these arguments seriously.

As Judge McShane of the United States District Court for the District of Oregon wrote in Rummel v. Kitzhaber, striking down Oregon’s marriage ban last May:

“I believe that if we can look for a moment past gender and sexuality, we can see in these plaintiffs nothing more or less than our own families. Families who we would expect our Constitution to protect, if not exalt, in equal measure. With discernment we see not shadows lurking in closets or the stereotypes of what was once believed; rather, we see families committed to the common purpose of love, devotion, and service to the greater community.”

Indeed, that is what the Court recognized today.

“No union is more profound than marriage, for it embodies the highest ideals of love, fidelity, devotion, sacrifice, and family. In forming a marital union, two people become something greater than once they were. As some of the petitioners in these cases demonstrate, marriage embodies a love that may endure even past death. It would misunderstand these men and women to say they disrespect the idea of marriage. Their plea is that they do respect it, respect it so deeply that they seek to find its fulfillment for themselves. Their hope is not to be condemned to live in loneliness, excluded from one of civilization’s oldest institutions. They ask for equal dignity in the eyes of the law. The Constitution grants them that right.”

Our work is by no means done. We have always fought for more than marriage. As we prepare for the work ahead, let us take this moment to celebrate this historic collective victory.