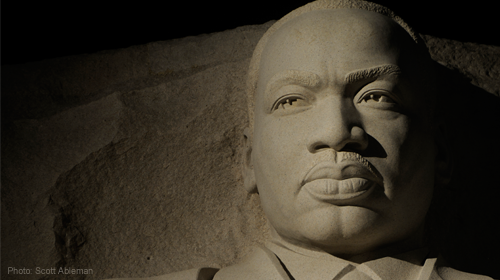 Newly sworn in FBI Director James Comey has ordered all new FBI agent trainees to visit the Martin Luther King, Jr. Memorial in Washington, DC, so they can reflect on the FBI’s infamous history of hounding the civil rights leader and recognize “the dangers in becoming untethered to oversight and accountability.”

It is an interesting choice of words, given that just last month the ACLU published Unleashed and Unaccountable: The FBI’s Unchecked Abuse of Authority, which describes the myriad ways the FBI is currently using its broad post-9/11 authorities to violate Americans’ constitutional rights based on race, religion, and ethnicity. Comey’s nod to the past is certainly appropriate and appreciated, but he can do much more to rein in real-time, ongoing FBI practices that infringe on the rights of a new generation of political activists and religious groups modeled on the advocacy tactics of Martin Luther King, Jr.

First, Director Comey can end the FBI’s racial and ethnic mapping program, which relies on crude racial stereotypes about what types of crimes people of different races and ethnic backgrounds commit to justify collecting demographic information to identify and map these communities so they can be targeted for further investigation and intelligence collection. The ACLU obtained FBI documents showing agents mapped Chinese and Russian communities in San Francisco on the theory that Chinese and Russians were sometimes involved in organized crime; Latino communities in New Jersey and Alabama because the street gang MS-13 had Latino members; Muslim and Middle Eastern-Americans in Michigan because there were terrorist groups in the Middle East and Southeast Asia; and the African-American population in Georgia to assess the “Black Separatist” threat. The FBI has refused to release the actual maps, despite ACLU Freedom of Information Act litigation, but even the redacted versions paint an ugly picture of official discrimination against innocent communities based entirely on their race, ethnicity and religion.

This ongoing FBI program is as antithetical to Dr. King’s message of respect for the dignity of all people as was J. Edgar Hoover’s misguided surveillance. Attorney General Eric Holder has the power to simply ban this practice and all other forms of unconstitutional profiling by amending the Justice Department Guidance Regarding the Use of Race in Federal Law Enforcement, as the ACLU and others have long requested. Attorney General Holder, President Obama, and FBI Directors Robert Mueller and James Comey have all repudiated racial profiling as wrong and unconstitutional, but so far none of them have taken the steps necessary to reform the Bush-era racial profiling guidance that affirmatively allows it.

Second, the FBI can stop spying on political activists and conducting aggressive raids and grand jury investigations aimed at suppressing political activity. The easiest way to accomplish this is for Director Comey to work with Attorney General Holder to amend the Attorney General Guidelines to require reasonable, articulable suspicion of criminal activity before the FBI can initiate investigations. These guidelines were first established after the FBI surveillance of Dr. King was exposed, but they have been eviscerated after 9/11, opening the door for renewed spying on domestic advocacy groups, as documented by the ACLU and confirmed by the Justice Department Inspector General. After the 2002 changes to the guidelines, the FBI was caught spying on groups like People for the Ethical Treatment of Animals, Greenpeace, Catholic Worker and the Thomas Merton Center for Peace and Justice. The rules were significantly loosened again in 2008, and the new authorities were employed to intimidate American Indian Movement activists opposing a local bear hunt. Requiring reasonable evidentiary standards to justify FBI investigations will reduce the chances that such wasteful and unconstitutional investigations take place.

Third, the FBI can stop treating American Muslims as a suspect community, infiltrating them with informants and agents provocateur and spying on Mosques and community groups through faux outreach programs. Community groups deserve to meet with the FBI to air grievances without worrying whether their personal information will be collected in intelligence databases. It should also end its unconstitutional policy of publicly disparaging and selectively ostracizing the largest American Muslim civil rights organization, the Council on American-Islamic Relations, in violation of its First and Fifth Amendment rights. Finally, the FBI can stop its increasing misuse of the No Fly list to pressure people into becoming informants in Muslim communities.

We have many other examples of abuse and recommendations to reform FBI practices in our report. We wish to commend Director Comey for at least acknowledging that the FBI has a history of overstepping the law and violating the rights of Americans who dare to challenge the status quo. But recognizing that there is new generation of advocates out there agitating for social change who need to be protected from unwarranted surveillance and investigation is essential for preserving a robust democracy. They are continuing Martin Luther King’s struggle for a more just and equal society. Honoring his legacy requires more than remembering FBI’s history of “abuse and overreach,” it requires ending current practices that have the same effect.