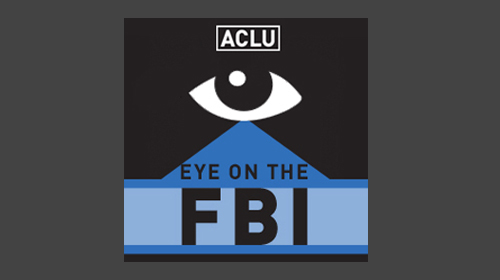 FBI documents the ACLU is releasing today reveal that from 2004 through at least 2008, the San Francisco FBI conducted a “mosque outreach” program through which it compiled intelligence on American Muslim religious organizations and their leaders’ and congregants’ constitutionally protected beliefs and activities, without any suspicion of wrongdoing. The ACLU previously disclosed that the FBI turned its “community outreach” programs into a secret and systematic domestic intelligence-gathering initiative. Now, FBI documents obtained by the ACLU of Northern California, the Asian Law Caucus, and the San Francisco Bay Guardian through a Freedom of Information act lawsuit show that the FBI used the similar guise of “mosque outreach” to gather intelligence on mosques and Muslim religious organizations.

The documents also show that the FBI categorized information about American Muslims’ First Amendment-protected and other entirely innocuous activities, as well as mosque locations, as “positive intelligence” and disseminated it to agencies outside the FBI. As a result, the agency wrongly and unfairly cast a cloud of suspicion over innocent groups and individuals based on their religious beliefs and associations, and placed them at risk of greater law enforcement scrutiny as potential national security threats. None of the documents indicate that the FBI told individuals interviewed that their information and views were being collected as intelligence and would be recorded and disseminated.

The FBI’s targeting of American Muslim religious organizations for secret intelligence gathering raises grave constitutional concerns because it is an affront to religious liberty and equal protection of the law. The bureau’s use of outreach meetings to gather intelligence also undermines the trust and mutual understanding necessary to effective law enforcement. Additionally, the FBI’s retention of information gathered through “mosque outreach” in its intelligence files violates federal Privacy Act prohibitions against the maintenance of records about individuals’ First Amendment-protected activity.

Here are some examples of what the FBI documents show (a larger list is available here):

• The FBI visited the Seaside Mosque five times in 2005 for “mosque outreach,” and documented congregants’ innocuous discussions regarding frustrations over delays in airline travel, a property purchase of a new mosque, where men and women would pray at the new mosque, and even the sale of date fruits after services. It also documented the subject of a particular sermon, raising First Amendment concerns. Despite an apparent lack of information related to crime or terrorism, the FBI’s records of discussions with mosque leaders and congregants were all classified as “secret,” marked “positive intelligence,” and disseminated outside the FBI.
• The FBI met with members of the South Bay Islamic Association four times (1, 2, 3, & 4) from 2004 to 2007. FBI agents documented as “positive intelligence” and disseminated outside the FBI an individual’s complaint of travel delays during the Hajj pilgrimage caused by the No Fly list, as well an individual’s conversation about the Hajj, “Islam in general,” Muslims’ safety in the U.S., and community fears regarding an FBI investigation of imams in Lodi, Calif. Two memoranda from 2006 and 2007 contain no descriptive information apart from the name and location of mosques contacted by the FBI, which might be appropriate to record in a normal community outreach context, but these documents were instead classified as “secret,” labeled “positive intelligence,” and disseminated outside the FBI.
• Two 2008 FBI memoranda described contacts with representatives of the Bay Area Cultural Connections (BAYCC), which was formerly the Turkish Center Musalla. The first describes the history, mission, and activities of the BAYCC, the ethnicity of its members and its affiliation with another organization. The second memorandum indicates the FBI used a named meeting participant’s cell phone number to search LexisNexis and Department of Motor Vehicle records, and obtained and recorded detailed information about him, including his date of birth, social security number, address and home telephone number. Both memoranda were classified as “secret.”

The San Francisco FBI documents bear titles such as, “Mosque Outreach Liaison,” “Mosque Outreach Contacts,” or “Mosque Liaison Contacts.” Some of these documents indicate that the FBI begins its “outreach” with questions about possible hate crimes against the Muslim community, but none of the documents appear connected to a mosque protection effort initiated after 9/11 by the FBI Civil Rights Unit to guard against anti-Muslim hate crimes. That effort operated under a “44” FBI case file number (see for example, this 2007 San Francisco FBI memorandum). In contrast, the file numbers on the “mosque outreach” documents were redacted, and many were classified “secret,” which indicates this effort was conducted under the FBI’s national security-related investigative and intelligence authorities. Although sometimes heavily redacted, all of the documents make clear that the FBI used its outreach meetings to document religious leaders’ and congregants’ identities, personal information (1 & 2), and religious views, practices (1 & 2), affiliations, and travel, as well as the physical locations and layouts of mosques.

Freedom of religion is a foundational element of American democracy, guaranteed by the First Amendment to our Constitution. In order to protect Americans’ religious freedom and other First Amendment rights, Congress passed the Privacy Act of 1974, which prohibits the government from collecting or retaining information about individuals’ First Amendment activities in all but very limited circumstances. The FBI’s documents demonstrate that it is ignoring these mandates and is misusing outreach to mosques and religious organizations to collect intelligence on American Muslims’ religious beliefs and activities. The FBI’s conduct, exposed in its own documents, threatens to chill American Muslims’ religious rights, exploits the good faith of Muslim groups and their members, and undermines community support for the government’s legitimate community outreach efforts.

In the ACLU’s previous “Eye on the FBI” alerts, we called on the FBI to stop using community outreach for intelligence purposes, to be honest with community organizations regarding what information is collected and retained during community meetings and to purge all information collected improperly. The latest revelations make the need for these reforms even more urgent. We also again call on the Department of Justice Inspector General to investigate Privacy Act violations within the FBI’s San Francisco Division, and to initiate a broader audit of FBI practices throughout the nation, to determine the scope of the problem and identify solutions. Finally, the Department of Justice must amend its 2003 Guidance Regarding the Use of Race by Federal Law Enforcement Agencies to ban profiling based on religion in all of its investigations.