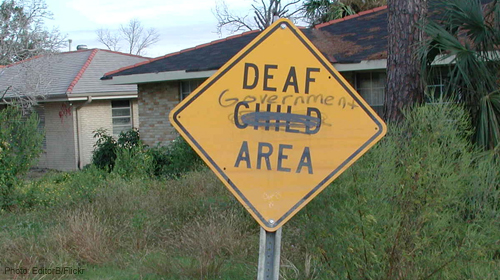 These are the most recent additions to the long list of deaf people who have been brutally assaulted by police officers for what has been described by officers as failure to respond to officers’ verbal commands, aggressive hand signaling or resisting arrest.

Two years ago, Robert Kim pulled over to fix a flat tire just before slipping into a diabetic episode. He was seated on the grass when a police officer arrived. Kim tried to make the officer aware that he was deaf, that he had trouble speaking, and that he was in diabetic shock. Instead of contacting paramedics, this officer and others beat and tasered Kim for failing to respond to their verbal orders. Doctors at the hospital where Kim was subsequently taken assessed his condition as life-threatening.

This January, Pearl Pearson, a 64 year-old deaf man, was attempting to show patrolmen a placard saying “I am deaf” when they pulled him from his car, brutally assaulted him, dislocating his shoulder and swelling his eyes. Immediately following Pearson’s assault, the officers’ dashboard camera reveals officers cursing after they run a quick check of his license and find out that he is deaf. The district attorney announced that the patrolmen involved would not be charged for this brutal attack on the same day that he charged Pearson—who has two sons who are police officers—with resisting arrest.

And last February Jonathan Meister was carrying his belongings from his friend’s home when officers mistook him for a burglar, determined that his attempts to use sign language were aggressive, and began beating, tasering and choking him to the point of unconsciousness.

These stories highlight the woeful lack of training about — and awareness of — Deaf culture and communication within police departments across the nation. They illustrate the urgent need for systemic change.

Perhaps as alarming as the frequency and severity of these assaults, is the infrequency and leniency of formal charges against the officers responsible. Deaf survivors of police brutality and family members of deaf homicide victims tend to prevail in lawsuits against police, costing taxpayers dearly, but officers are rarely formally charged or dismissed for their actions.

The Americans with Disabilities Act makes clear that officers must take appropriate steps to communicate effectively with deaf people. This obligation includes providing sign language interpreters and auxiliary aids. But beyond this, there is a clear need for police officers to understand how to communicate with members of the deaf community.

Many deaf people use their eyes and hands to communicate, as opposed to hearing people who more often rely on their ears and voice. Body language and facial expression are key components of sign language. As such, it is not uncommon for people who communicate through sign to create a bit of space between themselves and the other person to ensure that the receiver has full view of the hands, body and face. Officers who misunderstand these and other key components of Deaf culture and communication, may feel threatened and choose to retaliate against a deaf person. When police departments ensure that officers are aware of and sensitive to varied modes of communication used by deaf people, this will not only protect the deaf community, but also increase the safety of officers.

The ACLU, HEARD and Marlee Matlin have teamed up to create a forthcoming sign language video to ensure that deaf people know their rights when interacting with police officers (so stay tuned for details). But deaf people can only do so much. It is the responsibility of police departments to ensure that their officers are adequately trained.