Too Many Cops Are Told They’re Soldiers Fighting a War. How Did We Get Here? 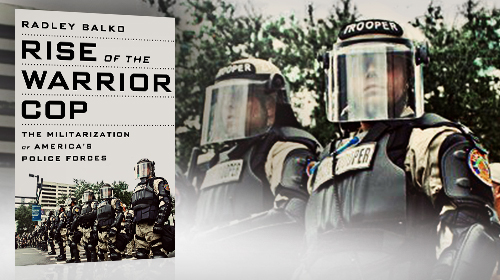 This post is the first in series on the militarization of policing. Check back this week from more from Radley Balko.

I want to thank the ACLU for asking me to guest blog this week to coincide the release of my new book, Rise of the Warrior Cop: The Militarization of America’s Police Forces.

I suppose I should start by telling you what the book is all about. Between about the early 1980s and today, American police forces have undergone some substantial changes. Most notable among these is the ascent of the SWAT team. Once limited to large cities and reserved for emergency situations like hostage takings, active shooters, or escaped fugitives, SWAT teams today are primarily used to serve warrants on people suspected of nonviolent, consensual drug crimes.

Today, the use of this sort of force is in too many jurisdictions the first option for serving search warrants instead of the last. SWAT teams today are used to break up poker games and massage parlors, for immigration enforcement, even to perform regulatory inspections.

Troubling as all of this is, the problem goes beyond SWAT teams. Too many police departments today are infused with a more general militaristic culture. Cops today are too often told that they’re soldiers fighting a war, be it a war on crime, on drugs, on terrorism, or whatever other recent gremlin politicians have chosen as the enemy. Cops today tend to be isolated from the communities they serve, both physically (by their patrol cars) and psychologically, by an us and them mentality that sees the public not as citizens police officers are to serve and protect, but as a collection of potential threats.

These are all generalizations, of course. Certainly there are great cops, great police chiefs and sheriffs, and there are plenty of police agencies that have healthy relationships with the public. But whether it’s with the ubiquity of these SWAT raids, stop-and-frisk, or the default geared-up, Robocop response to political protest, the relationship between police and the public on the whole is growing increasingly antagonistic — and oddly, this comes during a period when both crime and on-duty police deaths are at historic lows.

So my book looks at how we got here. It begins with a look at some of the fundamental concepts of liberty that I believe are threatened by these developments, including the Fourth Amendment, the Castle Doctrine (that the home should be a place of peace and sanctuary), and the Third Amendment, which is really a statement of the Founders’ broader aversion to militarism and standing armies. But the book’s real narrative begins in the mid-1960s, when police departments across the country were struggling to find ways to respond to protest, civic unrest, and outright rioting. It covers the birth of the SWAT team and the war on drugs, then explores the policies, events, and personalities that got us where we are today.

I’ll have more on the book in later posts. But in my first post, I also wanted to give some due praise to my hosts, the ACLU, for the organization’s campaign to unveil the real extent of police militarization in America. (I wrote about the campaign last March for Huffington Post.)

Back in the late 1990s, the criminologist Peter Kraska sent surveys to police departments across the country, then published several studies documenting the proliferation of SWAT teams. But since then, there’s been no real, comprehensive effort to quantify just how militarized America has become. One of my frustrations in covering this issue as a journalist has been the lack of data. Some states have decent enough open records laws to request this sort of information, but many police departments simply don’t want to say how often they use their SWAT team, and for what purposes. One ongoing scandal in the criminal justice world, for example, is the fact that there’s no reliable data on how often police officers fire their weapons at citizens. The federal government is supposed to collect these figures, but for whatever reason, it simply hasn’t done so.

So I applaud the ACLU’s efforts, here. Once we have some reliable figures, then we can begin to have a more informed debate about costs, benefits, and appropriate uses of this sort of force.

More on the Rise of the Warrior Cop: The Militarization of America’s Police Forces.

For more on the ACLU’s investigation of the militarization for policing in America, click here.