Living with HIV in an Alabama Prison 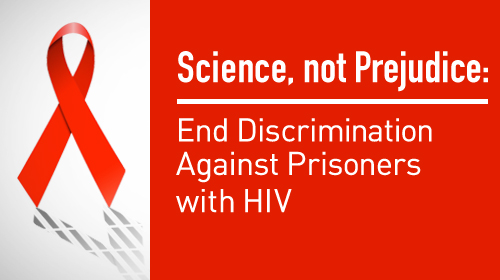 In 2011, the ACLU and the ACLU of Alabama sued the Alabama Department of Corrections for discrimination against inmates living with HIV. Alabama is one of only two states, along with South Carolina, that continue to segregate inmates living with HIV in separate housing units and otherwise restrict their access to prison programs. We are awaiting a decision. You can read more about it here.

I found out that I was HIV-positive while I was in prison in Alabama, and right away they locked me up in segregation until they could send me off to Limestone Correctional Facility where the other prisoners with HIV were kept. I hadn’t even done anything to get disciplinary action, and yet they locked me up in solitary right away. When I was let out of my cell, the guards would always say “dead man walking” loud enough for the other prisoners to hear. That’s when I realized this was going to be a weird, weird time.

Soon they sent me to Limestone to live in the HIV-positive unit. Alabama and South Carolina are the only two states where they still segregate positive inmates – all the other states stopped doing it when they realized it was unnecessary.

One day I was at SAP when they called for lunch. One of the inmates without HIV invited me to eat with him and some of the other prisoners. I felt honored that they invited me, so I just lined up, sat down for 15 minutes to eat with them, and then went back to class. It felt really good just to feel like a regular inmate during those 15 minutes.

That afternoon an officer approached me and said she heard I had eaten lunch with the non-positive prisoners. I said that was true, and the next thing I knew they put me in solitary confinement and locked down the whole facility. It turned out they were trying to find my particular spoon and plate. I’m not sure why, since you can’t transmit HIV this way.

They gave me a disciplinary ticket for being in an unauthorized area and causing a health hazard. I was in solitary confinement – which we call seg – for several weeks. I can’t remember exactly how long because it’s impossible to keep track of the time while you’re in there, but it was close to a month. The officers in seg were very sympathetic toward me, because they said they didn’t think I had done anything wrong.

When you’re in the segregated housing for prisoners with HIV, you don’t get the opportunity to participate in the full range of special training and work programs that the Department of Corrections offers. I would have liked to be able to study cooking – I really like to cook and I would have been really good at that. I would have loved to be able to work so I could have saved some money to help me land on my feet when I got out of prison. Instead, I couldn’t make any money. The prison loses out too, since they get part of the pay when prisoners are allowed to work.

Prisoners with HIV also don’t get the opportunity to transfer to a facility closer to their family, like other prisoners. That’s too bad – being able to work and to see your family really help to make the transition back to regular society easier. If prisoners with HIV could do these things, they might have a more successful re-entry into the real world when they get out.

Prisoners in the segregated HIV housing are made to wear a white armband, and prison officials tell everyone what that means. You can spot it from a mile away. People judge you instantly. I would have liked to be able to tell people on my own terms, but I didn’t have a chance.

I joined the ACLU lawsuit because I feel like it’s not right for us to be punished just because we have a disease. I’m not asking for special treatment – all I want is to be treated the same as other inmates. I believe that you do the crime, you do the time – but you should have the chance to better yourself while you’re doing the time.

There is no reason whatsoever for HIV-positive prisoners to be segregated, but unfortunately prison officials in Alabama are not educated in the ways of transmitting the disease. Hopefully, the court will rule against this ongoing discrimination, and Alabama will have to do the right thing. If something isn’t working, you have to change it. You have to change with the times.