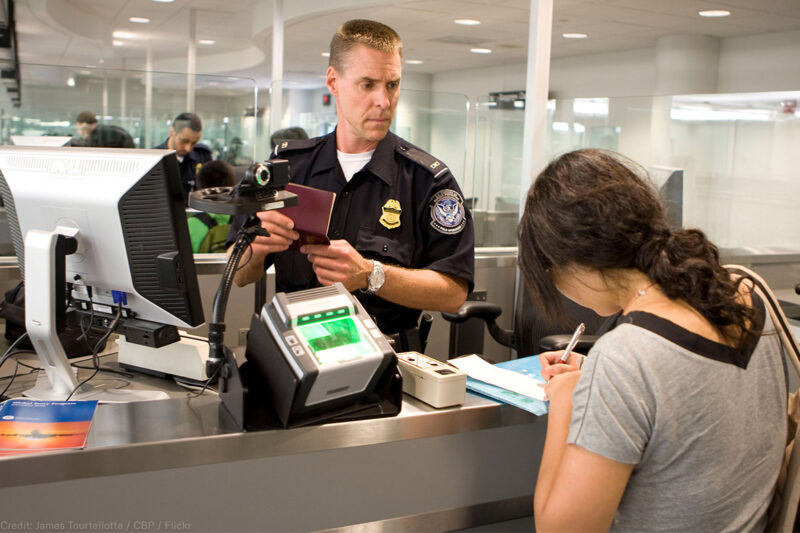 In September 2017 we, along with the Electronic Frontier Foundation, sued the federal government for its warrantless and suspicionless searches of phones and laptops at airports and other U.S. ports of entry.

The government immediately tried to dismiss our case, arguing that the First and Fourth Amendments do not protect against such searches. But the court ruled that our clients — 10 U.S. citizens and one lawful permanent resident whose phones and laptops were searched while returning to the United States — could move forward with their claims.

Since then, U.S. Customs and Border Protection and U.S. Immigration and Customs Enforcement have had to turn over documents and evidence about why and how they conduct warrantless and suspicionless searches of electronic devices at the border. And their officials have had to sit down with us to explain — under oath — their policies and practices governing such warrantless searches.

What we learned is alarming, and we’re now back in court with this new evidence asking the judge to skip trial altogether and rule for our clients.

The information we uncovered through our lawsuit shows that CBP and ICE are asserting near-unfettered authority to search and seize travelers’ devices at the border, for purposes far afield from the enforcement of immigration and customs laws. The agencies’ policies allow officers to search devices for general law enforcement purposes, such as investigating and enforcing bankruptcy, environmental, and consumer protection laws. The agencies also say that they can search and seize devices for the purpose of compiling “risk assessments” or to advance pre-existing investigations. The policies even allow officers to consider requests from other government agencies to search specific travelers’ devices.

CBP and ICE also say they can search a traveler’s electronic devices to find information about someone else. That means they can search a U.S. citizen’s devices to probe whether that person’s family or friends may be undocumented; the devices of a journalist or scholar with foreign sources who may be of interest to the U.S. government; or the devices of a traveler who is the business partner or colleague of someone under investigation.

Both agencies allow officers to retain information from travelers’ electronic devices and share it with other government entities, including state, local, and foreign law enforcement agencies.

Let’s get one thing clear: The government cannot use the pretext of the “border” to make an end run around the Constitution.

The border is not a lawless place. CBP and ICE are not exempt from the Constitution. And the information on our phones and laptops is no less deserving of constitutional protections than, say, international mail or our homes.

Warrantless and suspicionless searches of our electronic devices at the border violate the Fourth Amendment, which protects us against unreasonable searches and seizures – including at the border. Border officers do have authority to search our belongings for contraband or illegal items, but mobile electronic devices are unlike any other item officers encounter at the border. For instance, they contain far more personal and revealing information than could be gleaned from a thorough search of a person’s home, which requires a warrant.

These searches also violate the First Amendment. People will self-censor and avoid expressing dissent if they know that returning to the United States means that border officers can read and retain what they say privately, or see what topics they searched online. Similarly, journalists will avoid reporting on issues that the U.S. government may have an interest in, or that may place them in contact with sensitive sources.

Our clients’ experiences demonstrate the intrusiveness of device searches at the border and the emotional toll they exact. For instance, Zainab Merchant and Nadia Alasaad both wear headscarves in public for religious reasons, and their smartphones contained photos of themselves without headscarves that they did not want border officers to see. Officers searched the phones nonetheless. On another occasion, a border officer searched Ms. Merchant’s phone even though she repeatedly told the officer that it contained attorney-client privileged communications. After repeated searches of his electronic devices, Isma’il Kushkush, a journalist, felt worried that he was being targeted because of his reporting, and he questioned whether to continue covering issues overseas.

Crossing the U.S. border shouldn’t mean facing the prospect of turning over years of emails, photos, location data, medical and financial information, browsing history, or other personal information on our mobile devices. That’s why we’re asking a federal court to rule that border agencies must do what any other law enforcement agency would have to do in order to search electronic devices: get a warrant.