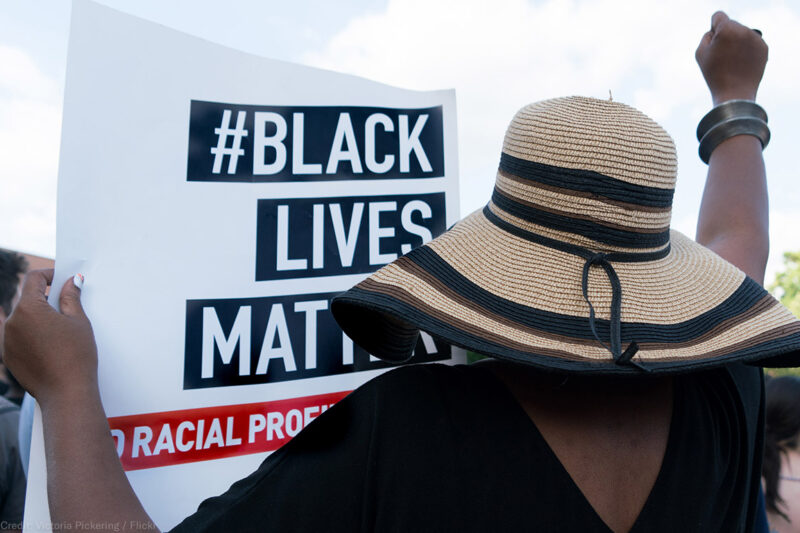 At a time when violence by white supremacists is on the rise, the FBI appears to be targeting Black people in a secret intelligence program concerning so-called “Black Identity Extremists”— an inflammatory term for a group that doesn’t even exist. The bureau’s practice echoes earlier, shameful government surveillance programs that sought to discredit civil rights and Black power activists who were critical to advancing racial equality — and it echoes modern-day spying that impacts immigrants and Arab, Middle Eastern, Muslim, and South Asian (AMEMSA) communities.

That’s probably why the government doesn’t want us to get information about this program. It is also why the ACLU and the Center for Media Justice are taking the FBI to court.

In August 2017, the FBI issued an intelligence assessment that designated “Black Identity Extremists Likely Motivated to Target Law Enforcement Officers” a new domestic terror threat. Disseminated to more than 18,000 law enforcement agencies, the intelligence assessment claims, without evidence, that Black people involved in unrelated police killings shared an ideology that motivated their actions. It also focuses on Black people who, in the bureau’s own words, “perceive[] racism and injustice in American society.”

The intelligence assessment is built on anti-Black racial stereotypes. It is so deeply flawed and of such “poor analytic quality” that even some law enforcement acknowledge that no group of so-called “Black Identity Extremists” even exists.

The intelligence assessment sparked an avalanche of concern from elected officials, Black activists, and Black-led organizations, including the Center for Media Justice and Color of Change. The dissemination of a racialized threat label to law enforcement nationwide holds the potential to spark baseless police harassment of Black activists who protest police and state violence. And we know that programs that diminish already weakened mechanisms for police accountability can lead to harm and death for Black people stopped by police. There are too many stories of Black men, women, and transgender people that underscore this truth.

In 2018, the Center for Media Justice and ACLU filed a Freedom of Information Act request for records to inform the public about how the “Black Identity Extremist” label is being used. Still, the FBI continues to keep critical information secret without any valid justification, and it has even refused to search for entire categories of records.

And we aren’t the only ones wanting more information about government surveillance of Black activists. Color of Change and the Center for Constitutional Rights submitted earlier records requests with the FBI and Department of Homeland security.

Today, we filed Center for Media Justice v. FBI, to get these FBI records. As a Black-led organization and the nation’s largest racial-justice network for media and technology rights, access, and representation, the Center for Media Justice represents organizations vulnerable to FBI surveillance under the BIE label. CMJ and ACLU stand together to demand answers about why and how the FBI is targeting Black people based on racial stereotypes rather than true security threats based on evidence.

The fabrication of a “Black Identity Extremist” threat is the latest example in a sordid history of efforts to harass, discredit, and disrupt Black activists who dare to use their voices to call out white supremacy. At the turn of the 20th century, law enforcement targeted Ida B. Wells and Marcus Garvey as “race agitators.” The FBI’s Counterintelligence Program (“COINTELPRO”) deployed covert activities against Martin Luther King, Jr., the Student Nonviolent Coordinating Committee, the Black Panther Party, el-Hajj Malik el-Shabazz (previously known as “Malcolm X”), and Ella Baker in the 1950s and 1960s. In the late 1960s and 1970s, the FBI surveilled and investigated Black-owned bookstores on the grounds of targeting purported centers of extremism.

But progress toward racial justice has been made precisely because Black people have bravely raised their voices to hold America accountable to our principles of equality and liberty. Black activism was central to breaking the hold of chattel slavery and legalized racial segregation, and it paved the way for greater power and freedoms for immigrants, women, and AMEMSA and LGBTQ communities, as Black people are part of every one of these groups. These are precisely the voices we need now to dismantle 21st century barriers to racial equality in the criminal legal system, the economy, education, housing, and every aspect of our society that bears the mark of more than 200 years of the forced servitude of Black people, followed by 90 years of Jim Crow.

There has been no sign that the FBI has retracted its flawed “Black Identity Extremist” threat label despite calls to do so from the Congressional Black Caucus and some law enforcement. Meanwhile, violent white supremacists pose increasing threats as recognized by a 2017 joint intelligence bulletin and the tragic killings of Black people, Jews, Muslims, and anti-racist protestors across the country.

The FBI must turn over documents shedding light on the creation and use of the “Black Identity Extremist” label. If the FBI refuses to provide this information, Congress should use every tool at its disposal to ensure the records are made public.

Knowing is only the beginning. Freedom from the mass profiling, policing, and punishment of Black bodies requires that the FBI stop targeting Black people because of their race and protected speech. Government crackdowns on Black protest were wrong in the past and have no place in our present. That is why, despite the chilling effect of the FBI’s racialized designation for Black activists, we continue to organize to the beat of an old civil rights song, “We shall not be moved.”