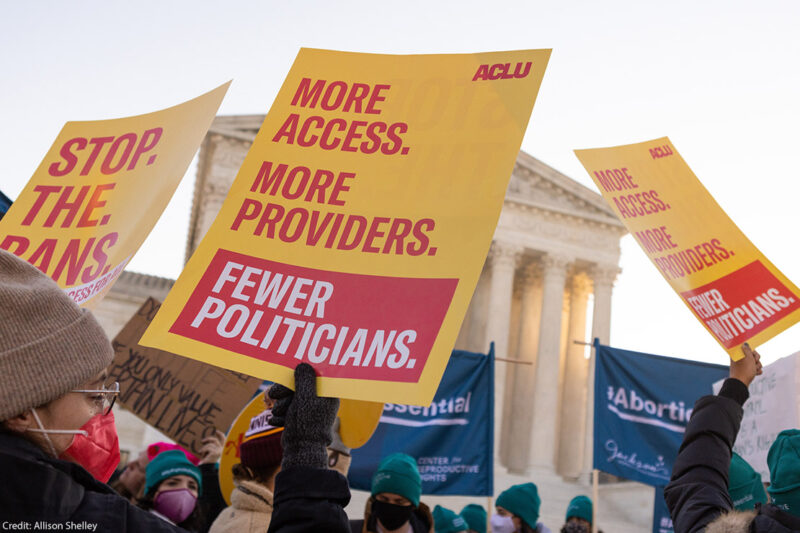 What is happening in Texas is not an anomaly, but a harbinger of what may come across the United States.

For more than six months, people in Texas have been unable to access abortion in the state beyond the earliest weeks of pregnancy. The state’s extreme, privately-enforced abortion ban, SB 8, has cut off health care for millions — but it didn’t have to be this way. Before the law took effect, we helped Texas abortion providers and abortion support networks bring a legal challenge in federal court that presented the U.S. Supreme Court with the opportunity to protect pregnant Texans and their families by exercising its power to block SB 8. Instead, the court refused to act, allowing the law to take effect while the litigation proceeded. Subsequent decisions by both the U.S. Supreme Court and the Supreme Court of Texas have ended the possibility of any relief from our lawsuit. Unfortunately, this means that SB 8 will likely remain in effect for the foreseeable future.

On the ground, SB 8 is wreaking havoc. Although the law has prohibited access to most abortions in the state, Texans continue to need and seek abortion care. Those with the resources to do so have been forced to flee the state. Individuals with the means to take time off work, find childcare, and pay for transportation have made long journeys to clinics in other states in order to access abortion. Providers thousands of miles away now report seeing Texas patients, and neighboring states — such as Louisiana, Arkansas, and Oklahoma — are overwhelmed with Texas patients. The influx of patients has caused weeks-long wait times in appointments for both traveling Texans and local patients alike. Even for those who are able to access care, SB 8’s delays from travel and wait times are pushing them later into pregnancy. Although abortion is very safe, and much safer than childbirth, each week of unnecessary delay increases the risks of the procedure.

For pregnant Texans beyond six weeks’ gestation who cannot overcome the difficult and costly barriers to leaving the state, SB 8 forecloses access to legal abortion and forces them to continue their pregnancies. The devastating impacts of forced pregnancy will be felt most by already marginalized communities, including people of color and low-income families. For example, undocumented immigrants in South Texas may fear interstate travel due to internal immigration checkpoints, and young people may be unable to take time away from school to get medical care far from home. And it is Black women who will suffer the brunt of the sometimes-deadly effects of forced pregnancy: Texas has a severe maternal mortality crisis, and Black women are three times more likely than white women to die during pregnancy or as a result of childbirth. Abortion bans hurt pregnant people and their families.

To help individuals avoid state-imposed forced pregnancy, abortion providers, funds, and practical support networks have stepped up to assist as many Texans as possible in accessing care in state before six weeks or traveling out of state. Clinics have expanded hours to offer more appointments, abortion funds have increased financial support to help cover the cost of more abortions, and practical support networks have ramped up helping individuals with the costs and logistics of travel, lodging, and childcare.

While these efforts are nothing short of heroic, they are not necessarily sustainable long-term or on a larger scale. Conservative legislatures in other states have been emboldened by the fact that the U.S. Supreme Court allowed SB 8 to take effect, and many are now considering passing their own versions of the Texas law. This could immediately stop some or all abortion access in other states, potentially including neighboring Oklahoma — hurting more individuals and families by not only cutting off care in those states but also eliminating places for Texans to travel for care and pushing people of those states into travel or forced pregnancy.

Unfortunately, SB 8 is only the beginning: What is happening in Texas is not an anomaly, but a harbinger of what may come for reproductive rights in the United States. The Supreme Court recently heard Dobbs v. Jackson Women’s Health Organization, a case about Mississippi’s 15-week abortion ban where the state asked the court to overturn Roe v. Wade, the landmark decision that recognized abortion as a constitutional right. A decision is expected in a few short months, and many have taken the court’s inaction on Texas’s SB 8 as a sign that the court will gut or completely eliminate the constitutional right to abortion.

The court could allow states to ban abortion after 15-weeks of pregnancy, which would cut off weeks of legal care in various states, including in states like Tennessee and Arkansas where challenges are pending to abortion bans at different points in pregnancy, and in states like Arizona and Florida that will likely enact 15-week bans this legislative session. Or the court could eliminate the federal constitutional right to abortion entirely, which would mean that about half the states in the country would likely ban abortion altogether, leaving 36 million people without access. This would be disastrous, enlarging the abortion deserts that already exist, and forcing people across the country to carry pregnancies against their will. As with SB 8, the effects of this patchwork landscape would be felt the most by those who are already marginalized.

No matter what the Supreme Court does with Roe, the court already let SB 8 take effect, which means that for Texans the right to abortion currently exists largely in name only. The inability to access abortion beyond the earliest weeks of pregnancy has been and will continue to be devastating for pregnant people in Texas and their families. Sadly, that is precisely the intent of SB 8’s architects and supporters, and whether through copycat bills, 15-week bans, or total abortion bans, courts and legislatures appear prepared to release this devastation on countless more people. But we won’t give up the fight — we will do everything we can to protect the right to abortion, rebuild the right if the Supreme Court dismantles it, and ensure that people can get the care they need.