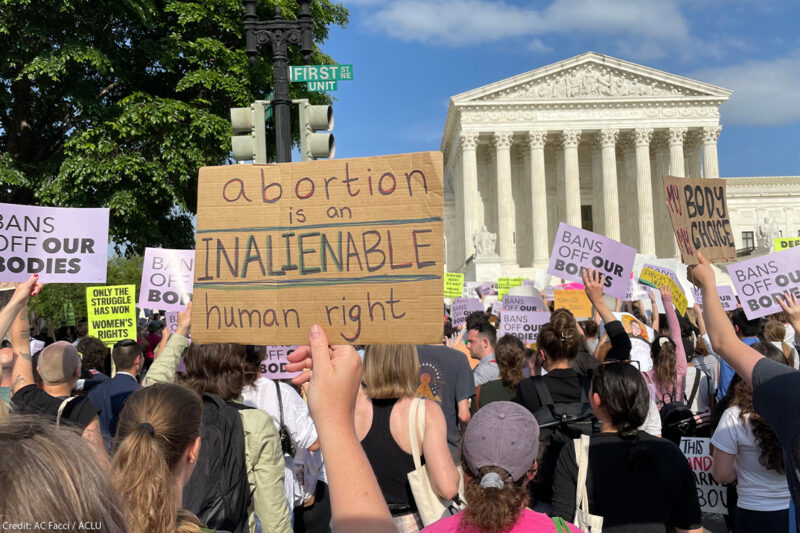 We don’t know what the final opinion will look like, but here’s what we do know about abortion access nationwide.

Update: On June 24, 2022, the U.S. Supreme Court issued a shameful ruling overturning Roe v. Wade. Learn more about how the ACLU continues to fight for abortion access and what steps you can take here.

There are some things we don’t know about the leaked Supreme Court opinion in Dobbs v. Jackson Women’s Health Organization, which indicated the court is ready to overturn Roe v. Wade, the case that recognized a federal constitutional right to abortion. We’re still waiting on the final decision to be released, which should come by the end of June, and with that wait comes uncertainty and fear.

But even without that final decision, there is a lot we do know.

We know that approximately half the states are poised to ban abortion if the Supreme Court lets them. Thirteen states have “trigger bans,” which are designed to go into effect as soon as the court grants states the authority to ban abortion. While some of those laws might face delays in implementation, others will go into effect immediately.

Nine states have pre-Roe bans that were never repealed and could be revived if Roe is overturned, which is why they are sometimes called “zombie bans” because of their potential to come back from the dead. There are also nine states that have passed abortion bans since Roe that were temporarily blocked in court but could be re-litigated and allowed to go into effect if federal precedent changes.

Lastly, there are a handful of states that currently have “firewall” protections – a legislative chamber that will kill hostile bills, a governor who will veto bans, or a state supreme court that will strike down restrictions – but are just one election away from a political environment in which abortion could be banned.

We know that abortion opponents won’t stop with overturning Roe. Already, states like Missouri have signaled an intent to apply their abortion laws outside their own state borders. Indeed, we know anti-abortion activists and politicians won’t rest until they have secured a nationwide ban. And the same politicians coming for abortion will also attack our right to get birth control and marry who we love. Our fundamental rights are under attack.

We know what happens when abortion is banned. Texas has already given us a preview with SB 8, a six-week ban that has now been in effect for more than nine months because of a private enforcement mechanism that made it difficult to block in court. The effects have been devastating, cutting the number of abortions in Texas by half and multiplying the number of patients seeking abortion in bordering states.

We know that the people harmed the most by abortion bans are those who already face the most barriers to health care overall, including people of color, low-income people, immigrants, youth, people with disabilities, LGBTQ+ folks, and those who live in rural communities.

We know that those who are able to travel out of state are the lucky ones and that as more states – primarily across the South and Midwest – ban abortion, traveling to another state to obtain care will be an option for fewer and fewer people. That’s not how fundamental rights work anyway. No one should have to leave their home state to obtain essential, time-sensitive health care. Our rights shouldn’t depend on our zip code.

We know that those who can’t marshal the resources to travel to get an abortion elsewhere will be forced to continue a pregnancy against their will – a potentially deadly prospect for Black women in particular, who face a maternal mortality rate that is more than three times the rate for white women in this country.

We know that some states aren’t waiting for the Supreme Court to act. For instance, although Oklahoma already has multiple abortion bans on the books, it recently enacted a Texas copycat law that has cut off abortion care after six weeks of pregnancy and may still pass a total ban on abortion that will be hard to block in court.

Several states, including Tennessee, have advanced restrictions on medication abortion this year, in an attempt to cut off access to abortion pills despite their stellar safety record. And Louisiana is considering a bill that would classify abortion as murder and allow criminal charges to be brought against providers and patients.

But we also know that we are not powerless. We will keep fighting in the courts, in the statehouses, and in the streets. And we will vote like our rights depend on it, because they do.

Several state legislatures are working hard to protect and expand access to abortion care. In the past month or so, Maryland authorized qualified clinicians like nurse practitioners to provide abortion care, established a fund to train and diversify the abortion workforce, and plugged gaps in public and private insurance coverage for abortion care. Connecticut also ensured clinicians can provide abortion care and instituted several measures that seek to protect providers, patients, and helpers from the overreach of states that are hostile to abortion. And Colorado codified the right to abortion and other reproductive health care in state law.

Moreover, in four states this year, abortion will literally be on the ballot – folks in Kansas and Kentucky are working to defeat measures that would take the right to abortion our of their state constitutions, while those in Michigan and Vermont will be fighting to enshrine the right to abortion and other reproductive freedoms in theirs.

In the meantime, abortion funds continue to scale up the existing infrastructure that has worked for decades to connect patients to care and fill the gap between rights and access. And mass mobilizations are being planned around the country. The path forward won’t be quick or easy, but we know we won’t give up our rights without a fight.