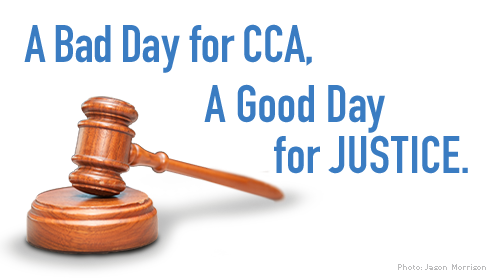 Yesterday, a federal judge in Idaho issued a scathing decision finding the Corrections Corporation of America (CCA) in contempt of court – illustrating, yet again, that handing control of prisons to for-profit companies is a recipe for abuse, neglect, and misconduct.

CCA is the nation’s largest owner and operator of for-profit prisons, with annual revenues topping $1.7 billion. The company runs the Idaho Correctional Center (ICC), a for-profit prison so violent that prisoners call it the “Gladiator School” – a study by the Idaho Department of Correction (IDOC) in 2008 found it had higher levels of violence than Idaho’s seven other prisons combined. In 2010, the ACLU filed suit against CCA for turning a blind eye to the epidemic violence at ICC, and in 2011, the parties agreed to settle the lawsuit after CCA promised to make a number of improvement, including hiring all the guards required in its contract with IDOC plus three additional guards.

But then CCA broke that promise – and lied about it. Repeatedly.

In April of this year, CCA issued a press release claiming that based on “an extensive internal investigation,” it had found there were “some inaccuracies” in staffing records over a seven-month period in 2012, and that the company regretted “decisions made by certain ICC staff members.” The press release said nothing about the number of hours that had been falsely reported as having been filled. In a separate press release issued by IDOC, however, it was disclosed that there were approximately 4,800 hours of time during those seven months where CCA employees had falsified records to indicate a correctional officer was staffing a security post, but the post was actually left vacant.

In response, the ACLU asked the judge to find CCA in contempt of court, forced CCA to turn over more records, and called CCA employees to testify. As the judge noted in his decision, these additional records and testimony showed “the non-compliance was far worse than the report of about 4,800 hours would lead one to believe.”

First, CCA’s “extensive internal investigation” only examined vacancies in the night shift, not the day shift – even though CCA knew that day-shift posts were also going unfilled. Second, the investigation only covered a seven-month period from April 2012 to October 2012 – even though there was no reason to believe that the falsified records began as late as April or stopped as early as October. Third, until very recently, CCA’s poor recordkeeping and lax internal monitoring made it difficult to identify when an employee was listed as staffing two different posts at the same time.

As the judge emphasized, CCA’s pattern of lies raises further questions: “For CCA staff to lie on so basic a point – whether an officer is actually at a post – leaves the Court with serious concerns about compliance in other respects, such as whether every violent incident is reported.” CCA stood to make thousands of dollars in undeserved profits from the falsification of its staffing logs. In fact, once its deception was discovered, CCA offered to return more than $100,000 to Idaho. The state refused to accept this amount and instead hired an accounting firm to determine how much is actually owed.

In finding CCA in contempt, the court found “a persistent failure” by CCA to fulfill its duties under the 2011 order, falsification of official documents, and lying by CCA staff. As the court noted, a state criminal proceeding is currently on-going to determine whether any CCA staff should be prosecuted for these actions. For now, the ACLU intends to ensure that the 2011 court order is fully implemented.

To remedy CCA’s breach of the agreement, the judge extended the period of court supervision of CCA’s compliance, ordered the appointment of an independent monitor, and set prospective fines of $100 per hour for each mandatory posts left unstaffed in the future. In response to CCA’s protest that hourly fines could lead to millions of dollars in liability for the company, the judge noted that CCA can avoid the fines by “living up to their promise in the Settlement Agreement. If a prospective fine leads to $2.4 million in penalties, CCA has no one to blame but itself.”

Similarly, the State of Idaho has no one to blame but itself if it continues to hand over its prisons to unscrupulous companies like CCA. Although the state Board of Correction announced earlier this year that it would not renew CCA’s contract to run ICC, it is inexplicably refusing to evaluate whether the state Department of Correction could do a better job than a for-profit company. Given the horrific track records of CCA’s major competitors, that’s a big mistake.