Happy Birthday to the Corrections Corporation of America? Thirty Years of Banking on Bondage Leaves Little to Celebrate 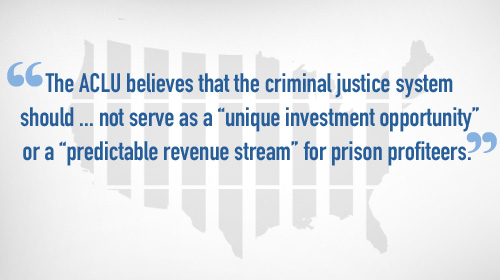 CCA essentially admits that their current profitability depends on high rates of incarceration. In their 2011 10-K report, filed publicly with the Securities and Exchange Commission, CCA stated:

“The demand for our facilities and services could be adversely affected by the relaxation of enforcement efforts, leniency in conviction or parole standards and sentencing practices or through the decriminalization of certain activities that are currently proscribed by criminal laws.”

Specifically, “any changes with respect to drugs and controlled substances or illegal immigration” could “potentially reduc[e] demand for correctional facilities,” as would “mak[ing] more inmates eligible for early release based on good behavior,” the adoption of “sentencing alternatives [that]…could put some offenders on probation,” or “reductions in crime rates.”

As detailed in a 2011 ACLU report, massive increases in overall incarceration rates from the 1970s onward created a fertile environment for the growth of for-profit imprisonment. From 1970 to 2005, the U.S. prison population increased by approximately 700% – far outpacing crime rates and the growth of the general population. Today, more Americans are deprived of their liberty than ever before – unfairly and unnecessarily, with little benefit to public safety. Many of them are in private prisons: the latest figures from the federal Bureau of Justice Statistics show that for-profit companies presently control about 18% of federal prisoners and 6.7% of all state prisoners, and the most recent federal survey of correctional facilities revealed that private prisons accounted for nearly all of the new prisons built between 2000 and 2005.

The growth of for-profit prisons also coincided with a dramatic increase in immigration detention. Thanks to a 1996 law mandating detention of many categories of people in deportation proceedings, and ever-increasing resources devoted to immigration enforcement after 9/11, the number of immigrants detained at any given time swelled from 6,423 in 1991, to 20,192 in 2001, to 32,095 in 2011. CCA and other private prison companies have profited enormously from this growth. According to the nonprofit Detention Watch Network, nearly half of all of the immigrants detained by the federal government are detained in for-profit prisons.

Although CCA insists that it does not engage in “lobbying or advocacy efforts that would influence enforcement efforts, parole standards, criminal laws, and sentencing policies,” the company spends heavily on both campaign contributions and lobbying. In 2011, CCA gave $710,300 in political contributions to candidates for federal or state office, political parties, and 527 groups (PACs and super-PACs). That same year, CCA spent $1.07 million lobbying federal officials and an undisclosed amount lobbying state officials. Additionally, as NPR reported two years ago, CCA was for many years involved in the American Legislative Exchange Council (ALEC), an organization of state legislators and corporations that drafted the basis for Arizona’s anti-immigrant SB1070 and that has consistently advocated for harsh sentencing and detention laws.

So, on its thirty-year anniversary, what is CCA’s vision for the future? AMarch 2012 CCA investor presentation boasts that incarceration “creates predictable revenue streams,” and cites the demographic trends in CCA’s favor: Nearly half of all individuals released from prison end up returning to prison within three years, one in every 100 U.S. adults are currently in prison or jail, and the U.S. population is projected to grow by approximately 18.6 million from 2012 to 2017. If these trends continue unchanged, then prison populations will continue to grow by an average of 13,000 additional prisoners each year. Add to this the increasing overcrowding of federal prisons and rising rates of immigration detention, and CCA concludes that prison privatization – which it euphemistically calls “partnership corrections” – represents a “Unique Investment Opportunity.”

The ACLU believes that the criminal justice system should keep communities safe, treat people fairly, and use fiscal resources wisely – not serve as a “unique investment opportunity” or a “predictable revenue stream” for prison profiteers. In 2013, we’ll be working hard to stop CCA’s desires from becoming reality. This means reducing the U.S. prison population, curbing immigration detention, and continuing our fight against the private prison industry’s efforts to bank on bondage.