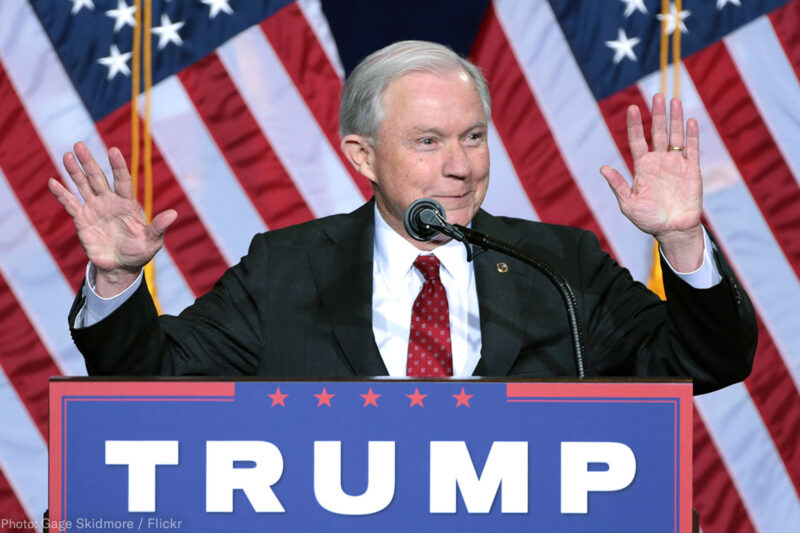 Jeff Sessions is in denial. Despite all the evidence, he refuses to believe that this country’s decades-long War on Drugs has been a colossal failure. The drug war is a public health menace, racially biased, and an economic disaster that has not curbed drug abuse or made anyone safer. All this is lost on Sessions, who insists on turning back sensible change in drug policy around the country and going against the will of the majority of Americans.

On Thursday, Sessions moved to rescind several memoranda issued by the Obama administration that expressed respect for the states whose voters had chosen more progressive marijuana policies. That earlier guidance from the Justice Department included directing federal resources away from enforcing federal drug laws against people who use and cultivate marijuana for personal and medical use in compliance with state laws and leaving undisturbed states that had decided to legalize marijuana through closely enforced regulatory systems.

These policies recognized the rights of states to formulate their own approaches to marijuana use. They also represented a smarter and more scientific approach to federal drug policy and reflected an understanding that states can forge successful approaches for the rest of the country to follow. They were right, and Jeff Sessions is wrong.

That Sessions would ignore science, history, and public health should not be surprising from someone who has said, “good people don’t smoke marijuana.” By thumbing his nose at sensible practices, Sessions is ignoring popular reform at the local level. That reform is the result of states and communities recognizing the enormous damage done by the misguided War on Marijuana, particularly to communities of color. As the ACLU documented in 2013, Blacks are almost four times more likely to be arrested for marijuana possession as whites, despite comparable usage rates. But these effects seem to be of no concern to Sessions, who is not bothered by police departments that racially profile, policies that criminalize the poor, or charging practices that increase mass incarceration and have a disparate impact on people of color.

Fight back against Sessions’ outdated policies

Not only have millions of people, disproportionately people of color, suffered the degradation of being arrested and thrown in jail for nothing more than possessing marijuana, many have had to contend with the debilitating collateral consequences that flow from such contact with the criminal punishment system, including negative impacts on student financial aid eligibility, employment opportunities, child custody decisions, and public housing.

The majority of Americans are in favor of legalizing marijuana. Even more support allowing the use of marijuana as medicine. They are not fooled by recycled drug war propaganda of a throwback drug warrior like Jeff Sessions. Republicans, Democrats, libertarians, and independents recognize that the criminalization of marijuana and people who use it has been a waste of time, money, and lives. Even some local prosecutors in states where marijuana possession is illegal are calling for fewer arrests and supporting legalization.

Not Jeff Sessions. Against all evidence, he’s driving federal policy backwards, even as 29 states have legalized marijuana in some form, and more are likely to follow suit.