Not Having a Roof Over Your Head Can Mean Jail Time: The Criminalization of Homelessness 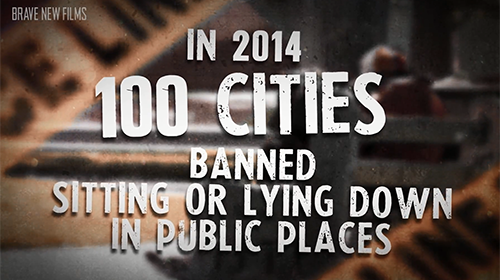 Kilee Lowe was sitting in a park when cops picked her up and booked her into jail overnight.

After she got out the next morning, she returned to the park. The same officer who had thrown her into a cell not 24 hours before had booked her again. It was back to jail for Kilee.

Kilee has been cycling in and out of the criminal justice system for years. After three-and-a-half years in prison, she’s been homeless for a little more than a year now.

“Just because I don’t have a credit card in my pocket,” she says, “does not make me a criminal.”

Kilee lives in Salt Lake City, Utah. It’s one of hundreds of American cities that has criminalized homelessness. Sometimes the “crime” is loitering. Sometimes it’s panhandling. In 2014 alone, 100 American cities have banned sitting or lying down in public places. Wherever it happens, the fallout is frustratingly similar. 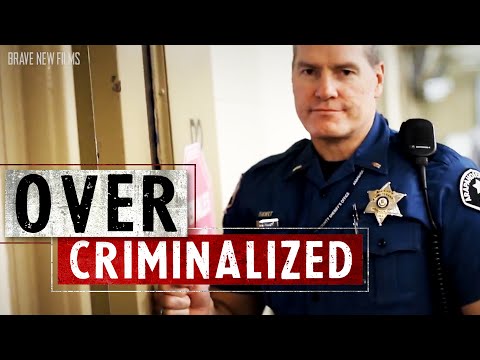 Not having a roof over your head means living in a continual crisis. The stress of not knowing where you’ll sleep at night, whether your family will be safe, and if you’ll be able to eat can suck up all your energy and your will. Regular stints in jail can only make it more difficult to find stability.

Not only that, but they drain tax dollars that could be put to much better use.

Salt Lake City crunched the numbers, and the prescription was clear. The city was spending $20,000 per homeless resident per year – funding for policing, arrests, jail time, shelter, and emergency services. Homelessness was not going down. Instead, for $7,800 a year through a new program called Housing First, the city could provide a person with an apartment and case management services.

In the latest video in the “OverCriminalized” series – produced in partnership with Brave New Films and The Nation – we spoke to people whose lives have been greatly improved by the Housing First program. One man told us that he was homeless because he was trying to run away from problems. He had been molested as a child and struggled with drug addiction as an adult. Recovery was hard and other programs would throw him back on the street if he relapsed, continuing the destructive cycle. After moving into stable housing, the unending stress of being homeless has dissolved. He’s been able to focus on sobriety and recovering. It’s worked.

Housing First hasn’t reached everyone like Kilee but that doesn’t mean the program isn’t improving people’s lives. More could be done to reach out to the very people that desperately need programs like these.

For the last 40 years, this country has continually ratcheted up the number of people behind bars and expanded the reasons we put them there. Social problems – like homelessness, drug addiction, and mental illness – have been sucked into a criminal justice system ill-equipped to handle them. The problems haven’t been solved. Instead, we’ve locked too many people away and wasted money that could have been spent on interventions that could actually change the course of people’s lives. And as has always been the case with excessive correctional control, communities of color have been hardest hit.

But it doesn’t have to be this way. America can safely reduce our reliance on incarceration. Several states have reduced their prison populations while crime rates have dropped.

Salt Lake City’s Housing First program is an important step in the right direction, a much more humane and fiscally responsible approach than criminalization. Other cities should follow suit. It’s time to end mass criminalization.

“OverCriminalized,” a new series produced Brave New Films in partnership with the ACLU and The Nation, profiles three promising and less expensive interventions that may actually change the course of people’s lives. It’s time to roll back mass criminalization and focus on what works.