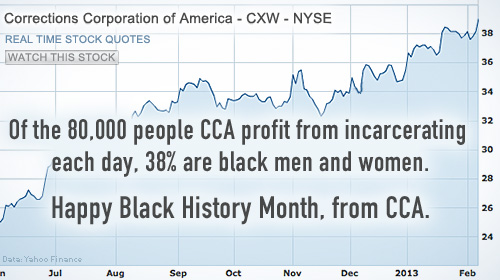 We can honor Dr. King’s legacy by embracing his dream of equality for all people – regardless of race, creed or color. We can also make a decision to be of service – to take actions that improve our communities and, ultimately, our society.

That quote comes from a short message from Mr. Hininger entitled, “Celebrating Black History Month.” It’s a fine sentiment that would be unobjectionable but for the fact that it’s utterly incompatible with the fundamental mission of the Corrections Corporation of America (CCA), which profits from the incarceration of over 80,000 men and women each day, whom they variously describe as a “revenue stream” and “unique investment opportunity.”

Nowhere in Mr. Hininger’s message is it mentioned that 38 percent of CCA’s “revenue stream” consists of black men and women, or that his company spends millions of dollars each year to influence campaigns and lobby elected officials to keep that revenue stream flowing into CCA’s prisons. His message is also silent on the tragic realities that result from the laws and practices that make his business possible:

Indeed, there is nothing about the modern criminal justice system that promotes equality for all people. As of 2004, more African American men were disenfranchised by felon disenfranchisement laws than in 1870, the year the Fifteenth Amendment was passed to prohibit laws that explicitly deny the right to vote on the basis of race. Spending time in prison means a lifetime of higher unemployment, lower income, and minimal social mobility; because such a high percentage of black men are incarcerated, we’re actually seeing widening racial income inequality. These are the consequences of CCA’s business.

What’s most unsettling about Mr. Hininger’s missive is that it’s so completely unconscious of the reality that his company supports and depends upon a system of mass incarceration that has devastated the black community, and that has done more than anything since Jim Crow to perpetuate a racial caste system in America. CCA might celebrate Black History Month, but no part of Black History Month celebrates CCA.