Refusing to Disappear: Prisoners at Tamms and their Families Conducted a Sustained Advocacy Campaign to Shut this "Supermax" Down 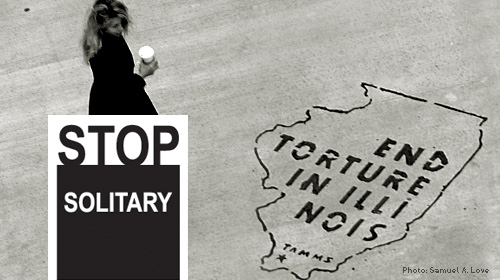 This post is the second part in our series on the closing of Tamms Supermax Prison.

Put simply, men were sent to Tamms to disappear.

Tamms was sold to the public as necessary to control the “worst of the worst” prisoners in Illinois. Yet when it opened in 1998, the majority of prisoners had virtually no disciplinary history at all. Rather, Tamms was populated by men who had sued the Department, filed grievances, and otherwise complained about illegal conduct by prison officials—wardens were looking for a way to get rid of these headaches. Other men transferred to Tamms had long histories of mental illness—which had never been treated in prison. Many were sent to Tamms because someone had claimed, at some point in the past, that they were gang leaders—even though most had never been found guilty of any gang activity. When the Uptown People’s Law Center challenged the placement of our clients in Tamms, we were told that these men were not entitled to a hearing, and would not be told why they had been sent to Tamms.

Some of these men have spent the last 15 years in complete and total solitary confinement at Tamms.

Tamms officially closes its doors today, first and foremost because the men sent there did not disappear. Rather than buckle under the extreme psychological pressure of solitary confinement, they banded together, fought back, and reached out and educated and organized their families and friends.

Let me tell you how they did it.

Like other “supermax” facilities, Tamms was designed to ensure that prisoners could be housed in complete isolation—never coming in contact with another prisoner, and only rarely coming in contact with staff. There is no dining hall; there is no chapel; there is no library; there are no classrooms; there is no yard. Breakfast, lunch and dinner are brought to prisoners in their cells—passed through a slot in a steel door. Medical and mental health care is generally provided through the cell door—with no privacy, and minimal ability for medical professionals to examine or even conduct a meaningful conversation with the men they are supposed to be caring for.

In a brave act, the men at Tamms initiated a prison-wide hunger strike in 2000. They asked for such simple things as shoes to wear outside that would protect their feet; the right to clean their own showers; and for other activities to productively occupy their time. The vast majority of prisoners refused meals the first day; dozens refused meals for a week; three lasted over 30 days.

The Uptown People’s Law Center reached out to the family and friends of the men at Tamms, and helped them form the Tamms Committee. Initially this was a support group—they arranged bus trips to visit men at Tamms (it is impossible to get to Tamms by public transit). In 2008, the Tamms Committee joined with other activists and became the Tamms Year Ten campaign. Once the families started meeting together, it became clear that the problem wasn’t the men at Tamms; the problem was that Tamms was torture. The Law Center joined this initiative, and together we pitched a statute that would prohibit the transfer of mentally ill men to Tamms; provide due process hearings to everyone sent to Tamms; and provide a clear path out of Tamms.

Alongside this impressive advocacy, the Law Center was litigating a class action to aid those imprisoned at Tamms (Westefer v. Snyder). On July 20, 2010, the District Court issued its opinion, finding that every prisoner who had been transferred to Tamms since it opened had been denied a hearing which complied with the minimum requirements of due process. The court ordered that every man be given a hearing, and a written explanation of the reason he was sent to Tamms. Hearings were held, and many of the men who had spent years at Tamms were finally transferred out. These hearings also forced the Department to reexamine who was at Tamms, and why they were still there. The answer turned out to be that most did not need to be at Tamms at all.

All of this hard work culminated in 2012, when Governor Quinn announced his budget for the coming year—and included no money to operate Tamms.

Through the combined efforts of all of these individuals and groups, and most importantly, the resistance of the men at Tamms, we were able to capture the attention of the public, legislators, and the Governor and get this torture chamber closed.

Two of the last men out in December, 2012, were also two of the first men to arrive at Tamms in March, 1998. They survived almost 15 years in total isolation. While closing Tamms is a tremendous victory, we cannot forget the terrible price paid by human beings as a result of this 15 year experiment in torture.