Tamms "Supermax" Prison, with its Inhumane and Ridiculously Expensive Solitary Confinement Practices, is Officially a Thing of the Past! 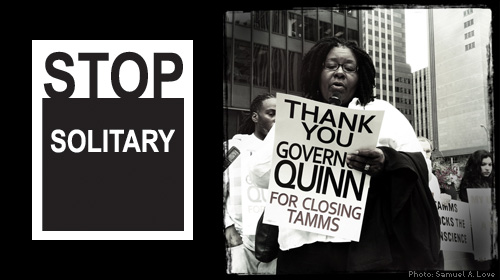 This post is the first part in our series on the closing of Tamms Supermax Prison.

Here’s to starting the New Year right. The notorious Tamms Correctional Center in Illinois, with its practice of housing human beings alone in cells for 22-24 hours per day with little or no human interaction or outside stimulus, officially shut its doors today.

Tamms, known as a “supermax” prison, symbolized the ever more punitive, dehumanizing, and ineffective state of our criminal justice system where entire institutions are built to hold prisoners in extreme solitary confinement.

The closing of Tamms is a major victory first and foremost because of the abhorrent and terrifying psychological consequences of such extreme and continuous solitary confinement. Spending over 22 hours a day alone in a cell has a negative psychological impact on all inmates, but is especially devastating for mentally ill persons, who are disproportionately represented in “supermax” prisons. Indeed, the American Psychiatric Association says that prisoners with serious mental illness should not be placed in segregation except in the rarest of circumstances and then only with special clinical supports. Unfortunately, at Tamms and other “supermaxes,” seriously mentally ill prisoners have been placed in solitary for months, years, and even decades. Before Tamms closed, an estimated 25% of the “supermax” prisoners had been in continuous solitary confinement for over ten years. But today, the years of suffering in “supermax” are over for the men held at Tamms.

Closing Tamms also means that state lawmakers are beginning to recognize that the exorbitant costs associated with “supermax” facilities are an unjustifiable drain on public resources. According to the Illinois Department of Corrections, “[o]ne of the reasons Tamms was chosen for closure is because it is by far the most expensive facility to operate” – indeed, closing Tamms will mean millions of dollars in savings for the state and its taxpayers. Data shows that Tamms was the least cost-effective of all Illinois’ facilities. Research from around the country tells the same story as in Illinois: solitary confinement is the most expensive form of incarceration and it neither deters violent behavior in prisons nor prevents recidivism.

The closure of Tamms is yet another example of states re-examining priorities and trying to do better with less. Indeed, Illinois Governor Pat Quinn intends to shift the cost-savings from Tamms’ closure to increase funding for important child protective services.

Illinois’ decision to close Tamms did not happen in isolation; there is a larger criminal justice dialogue taking place across the country about the need for reform. Spurred by growing budget deficits, costly litigation arising from unconstitutional treatment, and the public’s objection to inhumane conditions, several states are changing their prison systems to limit the use of long-term solitary confinement. Some selected highlights:

There is still more to be done, but every victory means we are one step closer to stopping solitary.

Let’s celebrate that we rounded an important bend today in Dr. Martin Luther King’s view of the moral universe, the arc of which is “long, but it bends towards justice.” And throughout 2013, we can help bend that arc a little more towards justice by ensuring that our leaders and our communities recognize that the devastating human impacts of solitary confinement, scarcity of public dollars, and concerns for public safety demand that we take a second look at the practice of solitary confinement and implement more effective and humane alternatives.