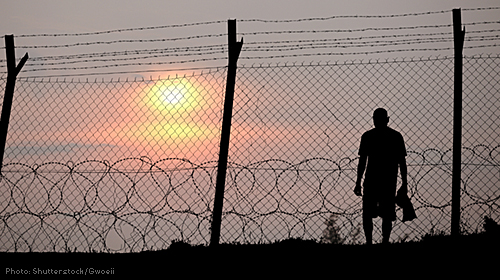 On March 11, a 39-year-old man held in detention at the Stewart Detention Center, a federal Immigration and Customs Enforcement (ICE) facility in southwest Georgia, died at a hospital in Columbus.

To this day, the immediate cause of Roberto Martinez Medina’s death remains unclear (a press release pronounced the cause of death as “apparent natural causes”).

The DOC has not released additional information about the death of Odom, due to an ongoing investigation by the Georgia Bureau of Investigation.

What sets apart the deaths of these two men held at CCA-operated facilities is the difference in official responses.

In the case of the death at the immigration detention facility, there have been no further explanations regarding what may have prompted the death — much less an official investigation by Immigration and Customs Enforcement, which was created as a part of Homeland Security in 2003 to consolidate immigration enforcement.

Medina’s tragic death marks the latest in the mounting number of immigrant deaths in the custody of CCA, the largest corporation in the business of for-profit detention.

From October 2003 through Feb. 7, 2009, 18 people died in immigration detention custody in facilities operated by CCA alone, according to information from The New York Times.

Yet ICE has failed repeatedly to hold CCA accountable. Instead, the federal agency continues to reward CCA with additional contracts, most recently for operation of the North Georgia Detention Center in Hall County.

The CCA’s track record should come as no surprise to those who read the report issued in April by Georgia Detention Watch, a coalition of several organizations and individuals advocating an end to unjust and inhumane immigration detention and local enforcement practices.

The report was based on interviews with 16 detainees during a humanitarian visitation coordinated by Georgia Detention Watch in December 2008. The report uses ICE’s own Performance Based National Detention Standards to evaluate conditions at Stewart.

Even compared to ICE’s own nonbinding standards, conditions at the CCA-operated facility can best be described as grossly inadequate.

Members of Georgia Detention Watch and partner organizations have requested on several occasions to meet with ICE to discuss the findings of the report, but have gotten no response.

Georgia Detention Watch is not alone in demanding answers and accountability for immigrant deaths in U.S. detention.

The United Nations Expert on Extrajudicial Killings, Philip Alston, who toured the United States on a fact-finding mission in June 2008 on a mandate to investigate killings in violation of international human rights and humanitarian law, recently released a report demanding greater transparency and swift and public investigations for deaths in immigration detention.

Today marks three months since the death of Medina. ICE has yet to provide any answers regarding why this man died in detention.

Neither have Georgia Detention Watch members been provided with an opportunity to meet with ICE representatives to discuss the mounting concerns regarding the treatment of immigrants at the CCA-run Stewart.

With the prospect for yet another CCA-run immigrant detention facility in Hall County, these concerns become especially urgent.

If ICE’s oversight of the CCA operation of Stewart is any guide, we can expect yet another facility funded by taxpayers held to no standards at all.

I will join others in front of the ICE office in downtown Atlanta today to honor the memory of Medina and other immigrants who have died in CCA custody.

Georgia Detention Watch members will wear black T-shirts reading: “Why Did Roberto Martinez Medina Die in Detention?” Our message is clear: The era for impunity is over. ICE must hold CCA to account.