Has your employer, school, or volunteer program ever required you to disclose all the medications you are taking – including birth control and antidepressants? Have you been asked if you saw a counselor or if you visited a hospital in the last five years?

Shockingly, AmeriCorps requires this information – and many more medical details – of all applicants to the National Civilian Community Corps (NCCC), the federal service program for young people ages 18 to 24. Even worse, it rescinds offers it has given based on the information it receives, even when the applicant is qualified to serve.

This is what happened to Susie Balcom, who applied to join AmeriCorps NCCC during her last year of college. With a 4.0 GPA, two successful terms with the state AmeriCorps program, and a demonstrated commitment to public service, she received multiple offers from AmeriCorps in April 2017. She accepted a one-year position to serve as a Support Team Leader, which would require her to coordinate logistics and trainings for corps members from the AmeriCorps office in Mississippi, starting in June. Thrilled to be able to serve her country, she made plans to move and postponed the start of her graduate studies. 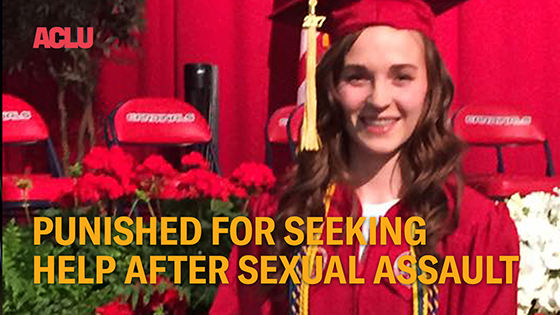 But in May, Susie was contacted by an AmeriCorps counselor about the health information form she was required to submit. On the form, along with listing medical visits for strep throat and dehydration, Susie disclosed that she had gone for three sessions of counseling for anxiety. The counselor asked her why she had experienced anxiety. Susie explained that she had been sexually groped by a co-worker several months earlier and that she had sought out counseling to ensure her own well-being. Susie continued to thrive in her academic and professional life following the incident. Two weeks later, AmeriCorps notified Susie that she was disqualified from service.

More about the case

We investigated AmeriCorps NCCC’s health screening process and learned that thousands of applicants every year are required to fill out the intrusive and unnecessary health information form. AmeriCorps NCCC also uses guidelines that discriminate against people with disabilities, including people it regards as having disabilities. For example, the guidelines state that applicants must be deferred from service if they began therapy for anxiety within the past six months, and this was used against Susie. But people with mental health issues should not be punished when they seek therapy, because they often are fully capable of service.

Other institutions that engaged in similarly broad health screenings have been found liable for discrimination. For example, a federal court concluded that the Peace Corps violated the Rehabilitation Act’s prohibition on disability discrimination when it used one-size-fits-all mental health screening guidelines, instead of examining individual circumstances to determine whether an applicant is qualified to serve.

Courts also have ruled that state bar associations, which grant licenses to attorneys, violate civil rights law when they asked questions like, “Have you within the past five years been treated or counseled for a mental, emotional, or nervous disorder?” These questions impose burdens on applicants with disabilities that people without disabilities do not endure. Health inquiries should instead be narrowly tailored to find out whether applicants have an existing condition that would actually interfere with their current ability to participate in the program.

Today, we filed a complaint on behalf of Susie with the Corporation for National and Community Service, the federal agency that operates AmeriCorps NCCC. We are calling on the agency to recognize that its health screening process is discriminatory and must be changed. In the meantime, we want to hear from other AmeriCorps applicants who believe they were treated unfairly in the health screening process. Please share your story with us.

AmeriCorps NCCC does important work around the country. But to truly empower communities, AmeriCorps must give everyone a fair chance to serve.