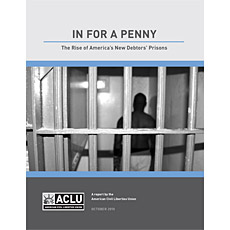 NEW YORK – Poor defendants are being jailed at increasingly alarming rates for failing to pay legal debts they can never hope to afford, according to two new reports released today by the American Civil Liberties Union and the Brennan Center for Justice.

The reports detail how states across the country, in the face of mounting budget deficits, are more aggressively going after poor people who have already served their criminal sentences, and in so doing undermining re-entry prospects, paving the way back to prison or jail and burdening the public with yet more costs.

“Incarcerating people simply because they cannot afford to pay their legal debts is not only unconstitutional but also has a devastating impact upon men and women, whose only crime is that they are poor,” said Eric Balaban, senior staff attorney with the ACLU National Prison Project.

The ACLU report, “In for a Penny: The Rise of America’s New Debtors’ Prisons,” and the Brennan Center report, “The Hidden Cost of Criminal Justice Debt,” show how the resurgent phenomenon of imprisoning people who are unable to pay fines and court fees is in fact counterproductive. States and counties, hard pressed to find revenue to shore up failing budgets, see a ready source of funds in defendants who can be assessed financial penalties above and beyond their criminal sentences that must be repaid upon pain of imprisonment.

“We are undermining the integrity of our criminal justice system and creating a two-tiered system of justice in which the poorest among us are punished more harshly than those with means, at a great cost to taxpayers,” said Vanita Gupta, Deputy Legal Director for the ACLU. “The rise of these debtors’ prisons also has a disproportionate impact on people of color, who are overrepresented in the criminal justice system.”

Kawana Young, a 25-year-old single mother of two in Michigan, accumulated a few minor traffic infractions for which she was given fines that she could not afford to pay. She attempted to pay off her debt by doing community service, was told after the fact that her service at an elderly living center would not count because the center was not a non-profit and, as a result, has been jailed five times for failing to pay her debt.

“I just need a chance to do right,” Young said. “It doesn’t make sense to jail people when they can’t pay because they definitely can’t pay while they’re in jail.”

There is nothing to suggest that aggressively seeking to collect unpaid legal debt actually makes any money – incarcerating indigent defendants for failing to pay their legal debts in fact ends up costing states and counties much more than they can ever hope to recover. In one two-week period last May, for example, 16 men in New Orleans were sentenced to serve jail time for failing to pay legal debts. Their incarceration cost the city of New Orleans over $1,000 more than their total unpaid debt. A man in Washington State was jailed for two weeks for owing $60 in debt and an Ohio woman was jailed for a month because of an unpaid legal debt of just $250.

Yet because so many court and criminal justice systems are inadequately funded, judges view the collection of legal debt as a critical revenue stream. In New Orleans, for example, legal fines and fees make up nearly two-thirds of the criminal court’s general operating budget.

The imposition of court fines and fees also creates significant barriers for people seeking to rebuild their lives after a criminal conviction. Eight of the 15 states studied by the Brennan Center, for example, suspend driving privileges for missed debt payments, a practice that can make it impossible for people to work and that can lead to new convictions for driving with a suspended license. Seven states studied by the Brennan Center require individuals to pay off criminal justice debt before they can regain their eligibility to vote after a conviction. And in all 15 states, criminal justice debt and associated collection practices can damage credit and interfere with other commitments, such as child support obligations.

“People are emerging from the criminal justice process with significant debts that they cannot hope to repay,” said Rebekah Diller, Deputy Director of the Justice Program at the Brennan Center. “As a result, these fees are creating new paths back to prison for those unable to pay.”

A copy of the ACLU report “In for a Penny: The Rise of America’s New Debtors’ Prisons,” is available online at: www.aclu.org/prisoners-rights-racial-justice/penny-rise-americas-new-debtors-prisons

A copy of the Brennan Center report, “The Hidden Cost of Criminal Justice Debt,” is available online at: www.brennancenter.org/content/resource/criminal_justice_debt_a_barrier_to_reentry/