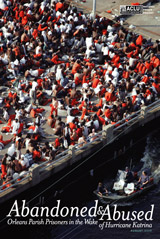 NEW ORLEANS — As the anniversary of Hurricane Katrina approaches, the American Civil Liberties Union’s National Prison Project today released Abandoned & Abused: Orleans Parish Prisoners in the Wake of Hurricane Katrina. The report documents the experiences of thousands of men, women and children who were abandoned at Orleans Parish Prison (OPP) in the days after the storm.

“The prisoners inside the Orleans Parish Prison suffered some of the worst horrors of Hurricane Katrina,” said Eric Balaban, a staff attorney for the National Prison Project. “Because society views prisoners as second-class citizens, their stories have largely gone unnoticed and therefore untold.”

In conjunction with the report’s release, the National Prison Project urged the president to direct the Department of Justice to evaluate OPP’s current evacuation plans in an effort to determine whether any meaningful improvements have been made over the past year. The ACLU also asked Congress to audit the jail’s emergency preparedness plans. The ACLU is calling for a full and immediate investigation into abuses at Louisiana correctional facilities during and after the storm and is also urging the DOJ to make the findings from such an investigation public and accessible to state and federal prosecutors.

The ACLU report describes a history of neglect at Orleans Parish Prison, one of the most dangerous and mismanaged jails in the country. This culture of neglect was evident in the days before Katrina, when the sheriff declared that the prisoners would remain “where they belong,” despite the mayor’s decision to declare the city’s first-ever mandatory evacuation. OPP even accepted prisoners, including juveniles as young as 10, from other facilities to ride out the storm.

As floodwaters rose in the OPP buildings, power was lost, and entire buildings were plunged into darkness. Deputies left their posts wholesale, leaving behind prisoners in locked cells, some standing in sewage-tainted water up to their chests.

“The sheriff’s office was completely unprepared for the storm,” said Tom Jawetz, Litigation Fellow for the National Prison Project. “The Louisiana Society for the Prevention of Cruelty to Animals did more for its 263 stray pets than the sheriff did for the more than 6,500 men, women and children left in his care.”

Prisoners went days without food, water and ventilation, and deputies admit that they received no emergency training and were entirely unaware of any evacuation plan. Even some prison guards were left locked in at their posts to fend for themselves, unable to provide assistance to prisoners in need.

The prisoners were finally evacuated by order of the state after days of fear and chaos. The report follows the prisoners as they were transferred to jails and prisons around Louisiana. Thousands of the men were first transported to the Elayn Hunt Correctional Center, where they were placed outdoors in a yard with inadequate food, medical care, and protection from other prisoners, many of whom were armed with makeshift weapons. According to the report, at several other facilities, prisoners were subjected to systematic abuse and racially motivated assaults by prison guards.

“Some prisoners at Hunt attacked other prisoners, and guards did nothing to prevent this from happening,” said Katie Schwartzmann, a staff attorney for the ACLU of Louisiana. “Guards threatened prisoners with guns when they were approached for help, and shot at one prisoner who had been stabbed by a group of other prisoners.”

Among the people profiled in the ACLU report are:

“These are the untold horrors of Hurricane Katrina,” Balaban said. “We must preserve these stories to create a record of the tragedy and to ensure that the mistakes detailed in this report are never repeated.”