I Was Six-Years-Old and Locked in Solitary

Solitary was the worst thing that's ever happened to me. I was in and out of jail while I was growing up, and every time I was in solitary confinement, it felt as horrible as the first time I was locked up and left alone.

The first time I'd ever experienced extreme isolation was when I was 6-years-old. My mother was a struggling drug addict and one day she took me out to see Jurassic Park. I've always wanted to connect with her because I didn't have a father. We had a wonderful night. She took me to this place – I didn't know where we were – and we were playing Connect Four at this table. I went to the bathroom and when I came back, my mother was gone. There were three or four men with latex gloves on and they said your mother's gone and you'll have to come with us. I was screaming inside. I didn't know who these guys were. They slammed me on the ground, restrained me. I was crying, kicking screaming. They end up taking me to what they call "quiet rooms." The rooms are cells, with linoleum floors and florescent lights.

For more on solitary confinement

They restrained me, they yanked down my pants, and they gave me a shot. It knocked me out. I woke up hours later, very confused. I did not know where I was or where my mom was and I was in so much pain. I start screaming and crying and kicking the door. They came back in and restrained me. It happened over and over again, for what felt like days. My mom came to see me two weeks later; my eyes were huge and black from all the medication they put me on. There was blood all over the floor, and I was on a mat on the ground in a gown. I'd been living like that for two weeks.

I was locked alone in a "quiet room" at Children's Hospital in Colorado. But this same type of treatment is happening in jails and prisons across the country. Every day, kids as young as 13 are locked in solitary confinement. It's something that should never happen because it derails kids.

After what happened to me when I was six, I was in and out of jail. I ended up in solitary again and again. One reason was because I became violent – not unprovoked, but if I saw another kid being restrained, I would freak out. I'd run over there and try to help get the kid out. The things you see when you're locked up – the physical abuse, the sexual abuse, the abuse of power – you get a chip on your shoulder.

When I was still a teenager, I was charged as an adult. So right off the bat they put me in solitary confinement again, because as a kid you are a security risk and they think putting you in solitary will protect you.

In solitary, your mind begins to deteriorate and you become your own worst enemy. I would wear out the concrete by how much I would pace back and forth in my tiny cell. People deal differently. Some people sleep all day. I tried to live in my mind, to take myself to a different place. The sensory deprivation you're going through, your mind begins to turn on you. The fluorescent lights begin to buzz louder. You can't sleep. When you do sleep, you have nightmares. Every day, when I woke up, I felt like something inside of me was dying – that's the worst feeling, feeling empty.

What could I do? I could get angry. I could punch the walls until my knuckles bleed. I could get the guards to come in here and maybe we'd fight – that would be better than no contact at all. I thought I'd spend the rest of my life in prison.

Most people don't come out of solitary unscathed. I don't think people come out as a whole person any more. Some people spend their entire lives trying to fix it. Your emotions become dim. You're trying to find your way through the dark. I wouldn't wish that on anybody – it's a form of torture. I kept pushing through the dark until I found myself.

And then I started talking. I made documentaries, performed poems, helped make a movie about my life, and started partnering with the ACLU. Kids should never be locked in solitary. People on the outside need to know the damage it can do.

James Burns will appear on the Dr. Phil Show today. He is also doing a Reddit AMA tonight at 7pm EST. Log on and ask him anything.

Everyday across the country, kids as young as 13 are held in solitary confinement – spending over 22 hours a day locked in a room the size of a parking spot. For young people who are still developing, the consequences are devastating. Click here to learn more about the ACLU's work to stop the use of solitary confinement on children.

First time I was locked up in solitary I was thirteen and didn't mind at all because no one was going to come in the door and beat me up or down. It was quiet most hours with exception of young girls screaming and refusing to leave their cells. I wondered if they too finally felt safe.

My heart is crying and I feel your fear. So sorry that this happened to you and so many others.

This is so sad and makes me so angry.

I was locked in closets, drawers and my room when I was a kid. Then I was threatened with both a billy club and a gun (my dad was a prison guard, but I don't know why he had a gun; I thought guards DIDN'T carry guns.)
I was also abused in humiliating ways and practically starved to death. I was starved long enough to contract iron-deficiency anemia. Plus I had my head banged into walls routinely which probably gave me mild traumatic brain injury, as it's known today.
The school nurse noticed something wrong and called children services, who started taking us out of the home one by one until only 3 children were left at home.
But other than that no damn body CARES what happened to me. The foster family said I was never allowed to discuss what had happened again, and this was 5 minutes after I started talking about it. They were already too emotionally distressed to ever hear another word about it.
I wonder if they can imagine how *I* felt, being that I'M the one who experienced all the physical and other types of pain.

It's amazing how people can get away with this. For what it's worth I'm very sorry for what happened to you. This would have traumatic for anyone let alone a six-year-old.

this all makes me cry. I am looking for a way to make a difference. my boyfriend is in prison for abusing me. I thought he might kill me more than once. what if I killed him in defense? would I be in prison too?

This is wrong,yet they do it. Prisons should not have solitary confinement,they should call in a doctor every week to check on inmate,put hem in a jail room open to outside and a window and bed and neccesities if they need to calm down. They will calm down,its sometimes calming to away to think but limit the time prisons can place them other to a week,make it a law and make it a rule they get medical treatment in that week of lock up.

We need some proactive ideas on alternatives. I think everybody involved is aware of how damaging "solitary confinement" (which is not always the same thing as segregation) is.

It's a problem that needs addressing, all right, but I've never heard any good answers. 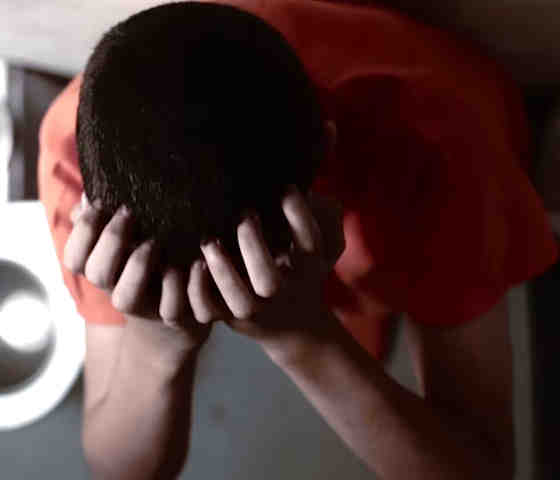