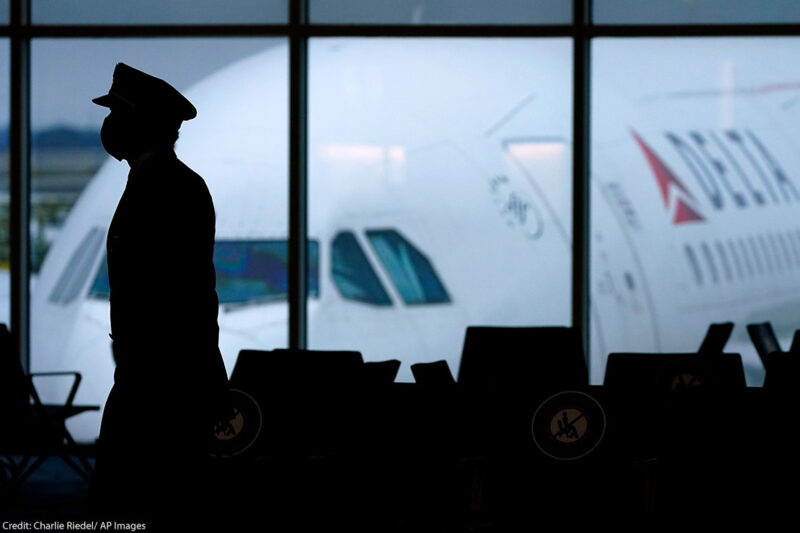 No-fly lists are already a civil liberties nightmare. Congress should not create another.

The CEO of Delta Airlines recently wrote a letter to the Attorney General, asking the Department of Justice to support a “no-fly” list of people convicted of “an on-board disruption” during flights. According to the CEO, Edward H. Bastian, “the rate of incidents with unruly passengers on Delta has increased nearly 100 percent since 2019.” Other airlines have been reporting a similar trend, and the industry has been pushing Congress to enact this kind of list for months. The existing no-fly list is a civil liberties nightmare, and expanding it should be a non-starter.

It’s not clear why rates of disruptive behavior on flights have been rising, though the politicized and false conviction of many that wearing a mask is useless, and therefore that being forced to do so is an incursion on personal freedom, has led to many incidents. The stresses of the pandemic may also have led to a general increase in free-floating hostility within the American population. But a significant element of most airlines’ business model is literally to intentionally make passengers feel uncomfortable during flights, and then sell minor comforts (as well as petty feelings of superiority) to those unhappy and/or affluent enough to pay for the privilege. If Congress wants to address bad behavior on aircraft, one thing it could do is take steps to make flying less miserable.

Regardless of the cause, we certainly have sympathy for flight attendants and other airline workers, who shouldn’t have to deal with passengers who are disruptive, unruly, or violent, no matter how infuriating flying can be at times. But this proposal raises a number of civil liberties issues.

The government has a terrible record of treating people fairly with regard to the existing no-fly list and other watch lists that are aimed at alleged terrorists. The key word there is “alleged,” because the government rarely provides any evidence to back up its watch-listing decisions, and seems to put fairness last when it comes to these bloated lists. My ACLU colleagues have been suing the government for years on behalf of innocent people who aren’t informed that they’re on the list, can’t find out why they’ve been put on it or what information their inclusion might be based upon, or how they can get their names removed. Getting information from the government about its treatment of these people, and getting the government to put in place some basic checks and balances against unfair treatment, has been like pulling teeth. It’s a battle we’re still waging, especially because lists like these are often prone to abuse. The FBI has put some people on the no-fly list just to pressure them to become informants and spy on their communities on behalf of the agency.

None of this inspires confidence around the creation of a brand new list.

Many questions remain over how such a list would be run. Who decides who goes on that list, how long they stay on it, and how they get off? How would cases of mistaken identity or other errors be handled? What offenses would land a person on the list? Aviation staff are only human — and being human, some will treat passengers badly and then, when those passengers become upset, seek to put them on the list. Anyone with the power to punish others needs to be subject to checks and balances.

Some proposals we’ve seen would include only those who have been convicted in court of breaking the law with their behavior on airplanes. That narrower approach would take care of some due process concerns, because it would require conviction in a court of law before this punishment would be meted out. But that would still raise problems. First, it would create a new punishment for things that are already illegal. If you commit assault, for example, whether on a plane or off, you can go to jail, and the Justice Department has already said it is stepping up punishment of such offenses. It has plenty of existing authority to do so, and one thing our criminal justice system does not need is more punishments. Experience shows they are likely to be over-used and unjustly applied.

In addition, these proposals would effectively make a ban on flying a new mandatory minimum punishment. Such sentencing schemes have many problems, including the fact that they remove discretion from judges over who is banned from flying and for how long. A person who only flies once a year might shrug off a flight ban, while for another person who depends on weekly travel to make a living, it could be a devastating and disproportionate punishment. And as travel expert Edward Hasbrouck points out, such a punishment would also disproportionately punish those who live in parts of our country that are on islands, including Hawaii, Puerto Rico, the U.S. Virgin Islands, Guam, and American Samoa, none of which have regular boat service to the mainland United States. Alaska residents also depend heavily on air travel. We have judges to take into account the particularities of each person’s situation and choose a punishment that fits. Mandatory minimums remove that power.

We don’t think creating an “abusive passenger no-fly list” is the right thing to do. When people commit crimes, we don’t punish them by cutting off their right to obtain electricity or water service. Airline travel should be in the same category. The right to travel is a human and constitutional right that can be crucial to people’s happiness (as when they need to fly to visit a dying loved one) and economic well-being. Loss of that right shouldn’t be added to the criminal justice system’s myriad punishments, at least absent extraordinary circumstances. There is a reason that airlines are legally classified as “common carriers.”

Individual airlines already maintain their own lists of passengers they’ve decided to ban; what they want is for there to be a unified one so people who are banned can’t use any airline. But these airline-maintained lists also raise due process concerns: It’s not clear what process if any airline personnel go through before banning a passenger, whether passengers have rights of appeal, and so forth. Of course, the consequences of any unfair bans are reduced if you can go to a competitor, but given the importance of airline travel to modern life as well as consolidation in the airline industry, it raises real issues if the airlines are banning people on their own whims.

It’s understandable that airlines, flight attendants, and others want to address what appears to be a growing problem of bad behavior, but, as is so often the case, seeking to punish our way out of the problem is unlikely to be effective. We shouldn’t create a new mandatory minimum punishment when there are other ways of addressing the problem without creating a new machinery of government that, experience strongly suggests, will introduce new injustices to American life.