School Is For Everyone: Celebrating Plyler v. Doe 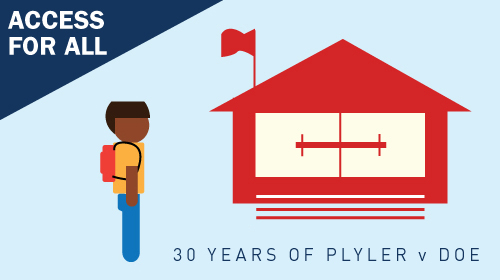 Jocelyn came to the United States when she was six years old, brought by a single mom who wanted her to go to school and have a better life than she did. Today, at age 14, Jocelyn is an honors student in Alabama, where she hopes to become the first in her family to graduate from high school, and to one day become a doctor. Jocelyn is striving to live the American Dream.

Thirty years ago, on June 15, 1982, the U.S. Supreme Court in Plyler v. Doe held that the Constitution guarantees all children, regardless of immigration status, equal access to a basic public education. This week on the ACLU Blog of Rights, we celebrate Plyler’s legacy in today’s struggles over access to education and immigrants’ rights.

At issue in Plyler was a 1975 Texas law withholding funds to educate kids who were not “legally admitted” into the United States, and allowing school districts to deny them enrollment. Some school districts took up the invitation to kick their students out of school, while others—like the district in Tyler, Texas—decided to charge them tuition (in Tyler’s case, a fee of $1000 per year). The fallout was immediate, as poor, Latino, and ESL students were driven from the classroom. The Mexican-American Legal Defense and Educational Fund (MALDEF) filed suit, and that case, which was consolidated with a similar lawsuit from Houston, ultimately went to the Supreme Court.

In a watershed decision, the Court struck down the law as violating the Equal Protection Clause of the Fourteenth Amendment. As the Court recognized, education was crucial to preventing a permanent underclass of undocumented immigrants in the United States and ensuring immigrants’ future membership in society. Citing Brown v. Board of Education, the Court recognized that “denying these children a basic education” would “deny them the ability to live within the structure of our civic institutions, and foreclose any realistic possibility that they will contribute in even the smallest way to the progress of our Nation.”

Plyler’s importance today cannot be understated. As Linda Greenhouse observed in the New York Times, but for Plyler, “public school systems all over the country would be checking papers and tossing away their undocumented students like so much playground litter.” But although Plyler remains the law on the books, Latino and immigrant children continue to face barriers to the schoolhouse door.

As documented by the ACLU, schools in New York, New Jersey, Arizona, and elsewhere routinely inquire into immigration status in the school enrollment process. Alabama’s anti-immigrant law goes even further, requiring public schools to determine the immigration status of children and many parents, and authorizing schools to report them to the immigration authorities. Alabama’s law—which, like Arizona’s infamous SB 1070, more broadly promotes rampant racial profiling of people presumed to be “foreign”—has wreaked havoc in Latino and immigrant communities, in many cases splitting up families, like Jocelyn’s, as parents are forced to make impossible choices about whether to suffer harassment and discrimination, or leave the state they call home.

Plyler has also set the stage for today’s battles over higher education, as immigrant youth fight to defend their ability to enroll in colleges and university; access in-state tuition and scholarships and financial aid; and secure passage of the DREAM Act’s path to citizenship for immigrants who came to the United States as children and graduate from high school.

But Plyler’s legacy extends beyond the classroom. Plyler—like many Supreme Court decisions before it—is also crucial today for its recognition that due process and equal protection apply to everyone in America—a principle that is central to combating anti-immigrant, racial profiling laws that discriminate so brutally against Latino and immigrant communities. As we await the Supreme Court’s decision on Arizona SB 1070, we should also remember the Court’s holding, thirty years ago, that the rights of all persons, including immigrants, are protected by the Constitution.