My Employer Shamed Me for Using Birth Control 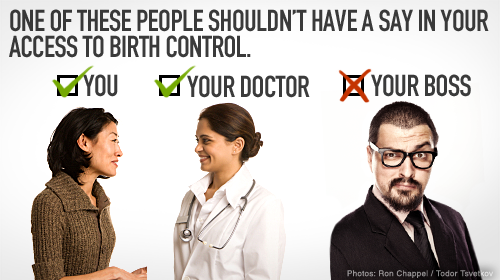 The Affordable Care Act makes effective birth control more affordable for millions of women by requiring employer-based health plans to include no-cost coverage for contraceptives. On March 25, the Supreme Court will hear arguments from companies that want to violate this law. Here is a story from one of the many women whose boss has tried to deny her birth control. For fear of losing her job, she requested to remain anonymous. Jessica is not her real name.

For the past three years, I have worked at the same Catholic university that I attended as a student. I love my job, and I can’t afford to lose it. But I’m afraid that I will be fired if I press my employer about whether contraception should be covered in our health plan. No one should be forced to choose between her job and her dignity, but that’s what I feel I’m being forced to do right now.

When I was first hired, the Human Resources secretary quickly told me that neither of the school’s two health insurance options covered birth control. But when I looked through the plan brochures, I noticed that contraception was not actually listed as something that was excluded. When I called the insurance companies myself, I found that they did both cover birth control—HR just didn’t want me to know it.

For over a year, I had no problem getting my birth control pills covered. I went off of birth control to have a child—a beautiful baby girl. After she was born, I went back on the pill because my husband and I weren’t yet ready for another child.

After the insurance company first denied me birth control, but before I learned that it was my employer who’d demanded they change their policies, I made an appointment with the university’s Human Resources director. I assumed it was a problem with the insurance company, and thought our HR Director would want to know. Boy, was I wrong. The HR director told me that birth control is something the university should never be expected to cover, and that I should be more responsible for my reproduction and “proud” of my child. Using birth control is the responsible decision for me and my family, and I was outraged that he would suggest that my family planning decisions somehow called into question my love for my daughter.

Ever since that conversation, the HR director gives me dirty looks whenever I pass him in the hallway. I discussed the situation with my boss, who was sympathetic, but advised me not to bring it up to anyone else in the University’s administration . . . because they might fire me.

I love my job and can’t afford to lose it, which is why I bite my tongue when I see the HR director, and why I’m not using my real name in this blog. But I should not have to choose between keeping my job and losing my dignity.