6 Things We Got Done On Reproductive Rights This Month 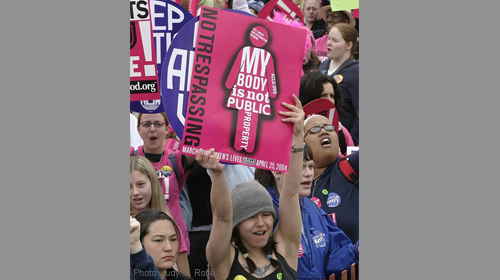 Politicians are comparing women’s health to cars, attempting to criminalize pregnancy, and singling out abortion providers for surprise, medically unnecessary inspections. But over the past month, reproductive rights supporters also found a few reasons to celebrate. While it’s undeniable that opponents continue their laser-like focus on ending abortion – legislators in 38 states have introduced more than 300 provisions seeking to limit women’s access to care this year – in some places your voices are being heard and policymakers are standing up for women’s health.

As we celebrate the 10th anniversary of the March for Women’s Lives, it’s fitting to reflect on our successes that show how our activism does pay off and that we can hold accountable those who let politics trump women’s health.

Extremist politicians are determined to continue to try to pass medically unnecessary laws that prevent women from getting the care they need. But these successes show that we are determined too. We’ll keep fighting to ensure that women can make the complex, personal decision about abortion with their families and their doctors – and without the interference of politicians.

With your help, we can make a difference.

Learn more about abortion and other civil liberty issues:Sign up for breaking news alerts,follow us on Twitter, andlike us on Facebook.