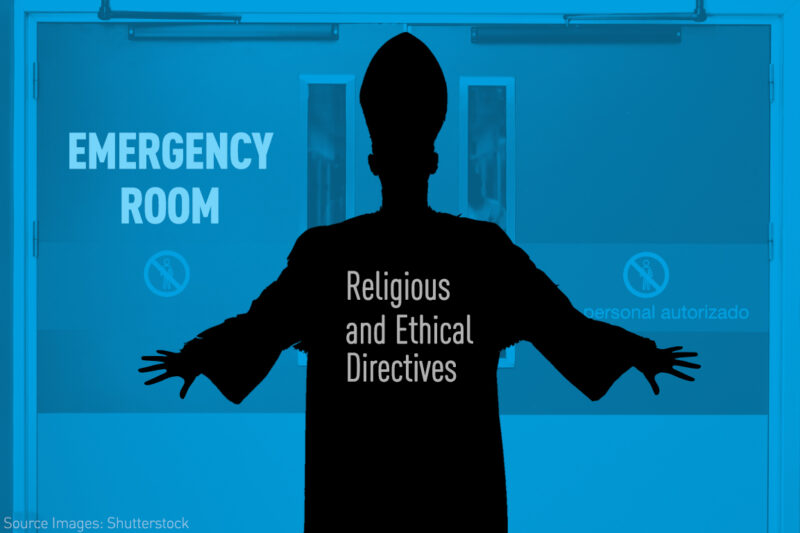 When you’re pregnant, what can go wrong is often the last thing you want to think about. Unfortunately, the unimaginable sometimes happens: you’re in the middle of your pregnancy when all of a sudden your amniotic fluid starts to leak. You’re in extreme pain. You start to bleed. You start to get a fever. You rush to the nearest hospital. You’d expect that any hospital emergency room would provide you the proper care. Right? Unfortunately, that’s not the case if you end up at a Catholic hospital.

Today we announced a lawsuit against one of the nation’s largest Catholic health care systems, for imposing religious rules on its staff that prevent doctors from performing an abortion in emergency cases involving miscarriage or other pregnancy complications—even when a woman’s life is at risk. We’re suing Trinity Health Corporation after discovering that it has repeatedly failed to provide women suffering pregnancy complications with appropriate emergency abortion care as required by federal law.

Trinity Health Corporation, which owns and operates more than 80 hospitals around the country, requires that all of its facilities abide by the Ethical and Religious Directives promulgated by the United States Conference of Catholic Bishops. These directives prohibit a doctor working at a Catholic hospital from terminating a woman’s pregnancy even when the failure to do so puts her health or life at risk.

These directives are written by Catholic bishops, not licensed medical professionals, and should not dictate how doctors practice medicine, especially when it violates federal law.

The failure to provide pregnant women appropriate emergency care, including an abortion when the circumstances warrant, violates a federal law called the Emergency Medical Treatment and Active Labor Act, known as EMTALA. A public health educator in Michigan discovered that at one of Trinity’s hospitals alone, at least five women who were suffering from miscarriages and needed urgent care were denied that care because of the Catholic directives.

Ten of the 25 largest hospital systems in the U.S. are Catholic-sponsored, and nearly one of nine hospital beds in the country is in a Catholic facility. The directives bar doctors at those hospitals from offering — or even discussing — certain reproductive health care services, even when those services are necessary to protect a woman’ s health. As U.S. hospitals become increasingly affiliated with religious organizations, the health of American women is threatened by the refusal to provide medically appropriate and often times lifesaving services.

In December 2013, we sued the United States Conference of Catholic Bishops on behalf of Tamesha Means, a woman who was denied appropriate medical treatment because the only hospital in her county is required by the bishops to follow religious directives that put women’s health at risk. That case is currently on appeal. Today, we are suing Trinity on behalf of all of our members in every state where Trinity operates to make sure this never happens again, and no woman is ever denied the emergency care she needs.

We all have a right to our religious beliefs, but that does not mean we should be able to use those beliefs to harm others. Legally and morally, saving a woman’s life and health must be every hospital’s first priority. Every pregnant woman who enters an emergency room should be guaranteed that she will get the care she needs.