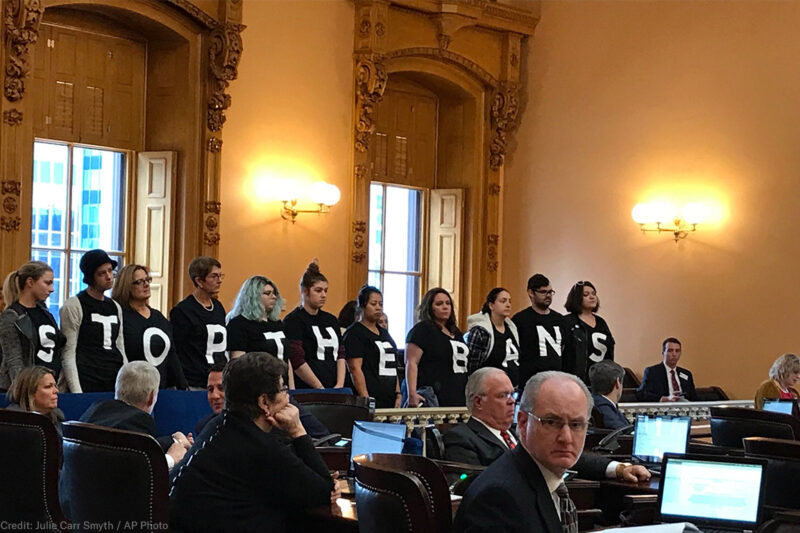 Today we filed a lawsuit challenging Ohio’s ban on abortion starting at six weeks of pregnancy. Our lawsuit comes a day after Alabama passed a similar law and weeks after Georgia, Kentucky, and Mississippi passed similar measures.

A ban on abortion starting at six weeks is a ban on almost all abortions. Before six weeks, most people do not even know that they are pregnant.

Legally, this case is straightforward. A ban on abortion is blatantly unconstitutional under more than 45 years of Supreme Court precedent starting with Roe v. Wade. The Ohio law we’ve challenged today flies in the face of that precedent and of the Constitution. We’ve asked the court to block the law before it can take effect on July 10.

Take action in your area

The consequences of this law taking effect would be devastating. Approximately 90% of abortions in Ohio take place at and after six weeks. If this law were to go into effect, the vast majority of Ohioans will no longer be able to obtain an abortion. People of color, people struggling financially, and young people will be disproportionately affected. Black women are three times more likely than white women to die of causes related to pregnancy, and denying women access to desired abortions while failing to adequately address these disparities will only result in more bad outcomes.

The six-week ban that we are challenging today is not an isolated attack on abortion by Ohio politicians. Instead, it builds on decades of abortion restrictions that already exist in the state, including a mandatory waiting period requiring two trips to the health center, parental consent for minors, and bans on insurance coverage for abortion.

Since 2011, anti-abortion politicians around the country have been chipping away at abortion access, passing more than 400 abortion restrictions. Quietly pushing abortion out of reach in this way has been a core part of the strategy for decades, starting back in the 1970s when U.S. Rep. Henry Hyde (R-Ill.) first proposed a law that prevents people enrolled in Medicaid from using their insurance to cover the cost of an abortion if they need one. In explaining the reason for his proposal, Rep. Hyde said, “I certainly would like to prevent, if I could legally, anybody having an abortion, a rich woman, a middle-class woman, or a poor woman. Unfortunately, the only vehicle available is the Medicaid bill.”

But this year — emboldened by the Trump administration’s attacks on reproductive health care access and the changes on the Supreme Court — states are taking direct aim at Roe v. Wade. Despite strong public support for affordable and barrier-free access to abortion care, they hope the balance of the Supreme Court has turned against abortion rights with enough votes to aggressively and systematically dismantle abortion access. These laws are part of a concerted, national effort to eliminate access to safe and legal abortion. Politicians pass draconian, blatantly unconstitutional abortion restrictions knowing they will get blocked while planning to appeal every legal challenge until they force the Supreme Court to outlaw abortion.

Along with partner organizations, we have vowed to challenge the Alabama and Georgia measures — just as we have in Ohio — and have already blocked the law in Kentucky. A challenge to Mississippi’s law is pending. Make no mistake, while the right to abortion is under unprecedented attack, abortion is a constitutional right — and it is currently legal in all 50 states. Roe has been the law of the land for over 40 years, and we will do everything we can to ensure that people are able to get the care they need without shame, obstacles, and stigma.