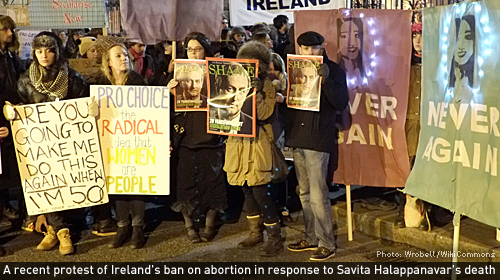 By now, most of us have read (and wept over) the tragic story of Savita Halappanavar — the woman an Irish hospital let die rather than provide the abortion that she needed to save her life. News of her death has generated outrage across the globe and a call from Secretary Clinton to the Irish government to ensure that women are protected.

But as we explained in an earlier post, this isn’t just an issue in Ireland. This is a real issue right here at home too. As in Ireland, Catholic hospitals in the U.S. refuse to let their doctors provide an abortion for a woman facing a medical emergency even if, as in Savita’s case, there is no chance that the baby will survive.

And now, for reasons I can’t begin to understand, politicians in Michigan are telling hospitals it is okay if they treat a pregnant woman exactly like the Irish hospital treated Savita. Under a bill passed on Thursday by the Michigan Senate (while the public was locked out of the Capitol, but that is another story), a hospital that refuses on religious grounds to provide appropriate care to a pregnant woman facing an emergency will get a free pass from the state. Yes, you heard that right: The hospital can’t lose its license. It won’t be at a risk of a fine. It won’t even have to face a lawsuit from the woman’s grieving family. Nope, the hospital can let a pregnant woman die and get off scot free.

Look, we may not all agree about abortion, but when a pregnant woman is taken to a hospital in an emergency she shouldn’t have to worry that the hospital will withhold the care she needs to protect her health. A pregnant woman who enters an emergency room should be guaranteed that she will get the care she needs if something goes terribly wrong. This should go without saying, but apparently some Michigan politicians need reminding: Saving a woman’s life must be every hospital’s first priority.

This bill was always dangerous and wrongheaded. But to pass it in the wake of Savita’s death is unspeakable. Let the Governor know how you feel about this bill and all measures that threaten women’s health. For the sake of all the women in your life who may some day be pregnant, let him know what you think of elected officials who play politics with women’s health. Unfortunately, speaking out now won’t bring Savita back or lessen her family’s grief. But it just might help prevent another tragedy like that from happening right here in the United States. That seems like the least we can do.