Standing Up Against Sexual Assault By the State Update: VICTORY! The American Civil Liberties Union and the ACLU of Michigan have confirmed that the Michigan Department of Corrections has abandoned the routine implementation of this degrading body cavity search.

Today, 34 civil rights, religious, and health organizations and experts joined together to condemn an extraordinarily degrading body search used on women prisoners. After every meeting with a family member, religious worker, or lawyer, and at other times, prisoners confined in Michigan’s Women’s Huron Valley prison are forced to remove all of their clothing and use their hands to spread open their vaginal lips as a guard peers into their vaginal cavities. This search — used routinely only in Michigan and in no other jurisdiction — has devastating emotional effects on women prisoners, the majority of whom are survivors of sexual or physical abuse. 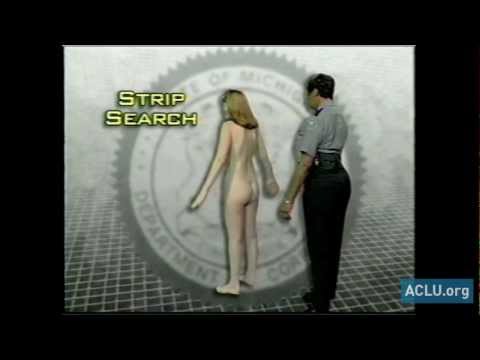 A striking fact about Michigan’s spread-labia vaginal search is that it doesn’t serve any practical purpose, in part because the procedure is piled on top of two standard strip search maneuvers that already permit officials to detect any items smuggled in body cavities. Despite being even more degrading than those methods, the spread-labia search doesn’t add any measure of security. It’s therefore not surprising that the search doesn’t appear to yield any contraband. When we asked for records of contraband found during these searches, the Michigan Department of Corrections refused to turn any over, claiming that no log of recovered contraband is kept. In fact, subjecting women to such a humiliating search actually endangers security, because it traumatizes the women and risks increasing tensions between prisoners and staff.

But is it fair to characterize the spread-labia search as sexual assault by the state? Yes, for many reasons. Although the search doesn’t serve any legitimate purpose, women are forced to submit through the threat — or the actuality — of force. If a woman resists taking off her clothing or opening her vagina, she can be physically subdued and searched, or punished with solitary confinement. In most cases, the threat of force is enough to coerce women to comply. It’s important to note that the U.S. Centers for Disease Control, and courts, define sexual assault as a violation of the sexual integrity or dignity of the victim. It doesn’t have to give sexual gratification to the perpetrator, or even involve touching. The point of sexual assault is domination and control, asserted by means of the victim’s body. Decades ago, the eminent sociologist Erving Goffman described how body searches are used in prisons and similar institutions to humiliate and degrade inmates through what he called “forced interpersonal contact.” By breaking down a person’s sense of self, compulsory body searches make prisoners easier to control.

The similarities between the spread-labia search and sexual assault don’t end there. The effects of degrading body searches on the women forced to undergo them are uncannily similar to the effects of rape. In studies, both rape survivors and prisoners subjected to invasive searches reported damaged self-esteem, a sense of helplessness, anger, and feelings of disgust toward their own bodies. Both groups experience repetitive phenomena like flashbacks and nightmares. And without proper care, both can respond to the intense pain with self-destructive coping behaviors like self-harm and drug abuse. The words of the women themselves show that they experience the spread-labia search as sexual assault.

A broad coalition of rights and religious groups has given Michigan’s prison officials a clear choice: If officials are truly interested in rehabilitating prisoners and thereby reducing crime, they must stop sadistically undoing the hard work of rehabilitation through this patently abusive search. You can stand up against the spread-labia vaginal search by learning more about this extreme civil rights violation.