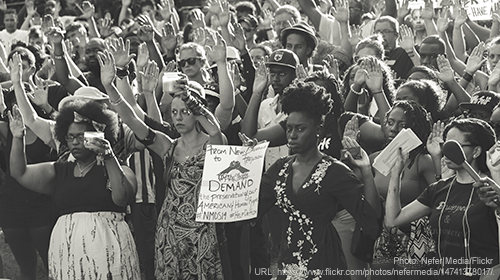 The tragic killing of college-bound teenager Michael Brown has raised questions about the frequency with which police kill unarmed black men in America. The answer, unfortunately, is far too often.

Just three months ago, on a warm April afternoon, a white police officer shot and killed Dontre Hamilton, a 31-year-old black man, in downtown Milwaukee’s Red Arrow Park. According to the Milwaukee police chief, the officer was “defending himself in a violent situation.” But the eyewitness report of a Starbucks barista paints a very different picture.

According to the barista, Hamilton had been sleeping on the concrete sidewalk next to Starbucks when two police officers approached him, asked him questions, and left after determining that he was doing nothing wrong. But an hour or so later, she heard yelling. Looking out the Starbucks window, she saw a different white police officer standing up against Hamilton, “who was holding the officer’s own baton in a defense posture.” The officer “lunged” at Hamilton in an attempt to get the baton, but failed. The barista watched in horror as the officer stood 10 feet away from Hamilton, pulled out a gun, and shot Hamilton 10 times in quick succession without issuing any verbal warnings. The barista reports that she never saw Hamilton hit the officer with the baton.

The tragic killing of Hamilton bears a striking – and deeply troubling – resemblance to the killing of Michael Brown, who was shot by an officer six times, including twice in the head, after being stopped for walking down the middle of a street. Including Hamilton and Brown, at least six black men were shot and killed by police since April in circumstances that suggest the unjustified use of excessive force and possible racial profiling.

In July, Eric Garner was killed in New York by officers who placed him in a chokehold – a banned tactic – and slammed his head into a sidewalk during an attempt to arrest him for allegedly selling illegal cigarettes.

In early August, police in Beavercreek, Ohio, fatally shot John Crawford III in a Walmart, where Crawford had been holding a BB gun that he had picked up on a store shelf.

Just days after the killing of Brown, Ezell Ford was killed by police on a Los Angeles sidewalk during an investigative stop. While police contend that officers opened fire after a “struggle,” Ford’s mother reports that he was lying on the ground complying with the officers’ order when he was shot three times in the back.

And the very next day, pressman Dante Parker was killed in Victorville, California, after being repeatedly shocked with a stun gun by police attempting to arrest him as a suspect in a nearby robbery. Apparently, police suspected him because he was riding a bicycle, and the robbery suspect was reported to have fled on a bike.

The stories of these six people make one thing painfully clear: The killing of black men in incidents that begin as investigatory police stops are anything but unusual in America. In this sense, Ferguson is Everytown, U.S.A.

There is a reason for this. More than 240 years of slavery and 90 years of legal segregation in this country have created a legacy of racialized policing. Killings and beatings lie at one end of a spectrum in which black people ­– and young black men in particular – are routinely stigmatized, humiliated, and harassed as targets for police stops, frisks, and searches, even when they are doing nothing wrong.

The numbers show the reality.

Studies of Rhode Island traffic stops and New York pedestrian stops confirm that police stop blacks at higher rates than whites. Even more troubling is that the New York study determined that a neighborhood’s racial composition was the main factor for determining NYPD stop rates, above and beyond the “role of crime, social conditions, or the allocation of police resources.” In other words, New York cops targeted blacks because of their race – not because they happened to live in a dangerous place or in an area flooded by police.

Data from Ferguson mirrors these racial disparities. Last year, blacks not only accounted for 86 percent of stops, 92 percent of searches, and 93 percent of arrests by Ferguson police, the state attorney general’s office calculated that blacks were overrepresented in these encounters in light of their population figures. Even more damning is the fact that although police were twice as likely to search blacks than whites after initiating a stop, whites were far more likely to be found with contraband.

It is not a leap to conclude that the same biases that cause those racial disparities also make it more likely that black men will die during the course of police arrests. According to the Department of Justice, Bureau of Justice Statistics, although black men made up only 27.8 percent of all persons arrested from 2003-2009, they made up 31.8 percent of all persons who died in the course of arrest, and the majority of these deaths were homicides.

Why does racialized policing persist despite the end of slavery and Jim Crow? While explicit racial bias may be less prominent today (albeit anything but eliminated), implicit racial biases plague all of us, including those charged with keeping our streets safe. A large body of compelling research has demonstrated how these unconscious, automatically activated, and pervasive mental processes translate into action with devastating consequences for black people.

In particular, researchers have well-documented shooter bias. One video game study simulated the nearly instantaneous decisions made by police officers to shoot armed individuals and to refrain from shooting the unarmed. The study revealed that participants were more likely to shoot black people than white people in error.

Both explicit and implicit biases lead far too often to the killing of black men in police-civilian encounters. And they undergird the daily indignity and humiliation experienced by blacks who are stopped, questioned, and searched by police when they have done nothing wrong.

Police are sworn to serve and protect everyone equally, not disproportionately stop and harass only certain communities. Rather than express surprise and shock during a summer where six black men have been killed by police in highly questionable circumstances, it is up to us to do something.

The single most important first step is to provide accountability—including through the Attorney General’s issuance of a comprehensive ban on racial profiling. Accountability will advance justice for past harms and pave the way forward for a future in which we are closer to the promise of equal justice for all.

Sign our petition asking the Departments of Defense, Homeland Security and Justice to stop funneling billions into the militarization of state and local police forces.